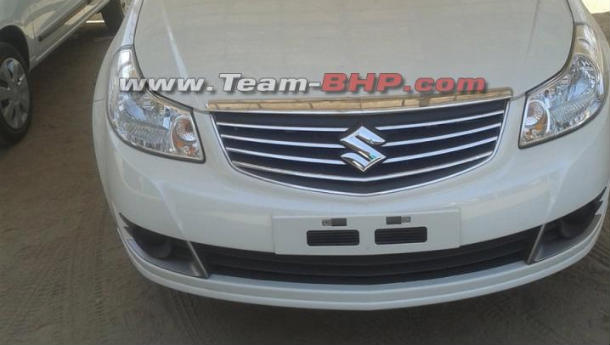 Our friends at Team-Bhp.com have caught this example of the facelifted SX4 sedan at what seems to be either a Maruti Suzuki dealer stockyard. The facelifted SX4 is expected to hit showrooms in the next few weeks.

In production since 2007, the SX4 did undergo minor changes in 2010 with the launch of a new automatic version as well as variable valve-tech for the petrol variant. A diesel version went on sale in 2011. In the last few months, sales of the SX4 have fallen rather drastically and the facelift will help take the model forward for another 18 months, until an all-new model hits showrooms, expected in late-2014 or early-2015.

The facelifted SX4 will get chrome treatment on the grille as can be seen in the pictures, a revised front bumper with the air-dam and new housings for the fog lamps. The tail lamps will get new lens covers and possibly an extra dollop of chrome treatment too. Interior changes will be marked with a new black and beige treatment as well as the addition of a new GPS unit on the top-end variant. The SX4 petrol could also get some simple, but clever mechanical changes to ensure that the ground clearance drops to 170 mm or less, so that it doesn't get classified as an SUV under the new excise duty regime for the financial year 2013-14.