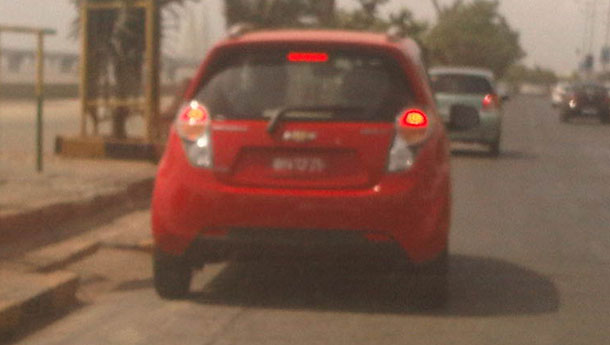 General Motors has been a bit quiet ever since the launch of the Cruze and Beat in late-2009/Early-2010. The company, however has been working on making improvements and additions to them. So the Cruze has gotten an automatic option, while the Beat now has a smoother and more refined petrol engine after general market feedback. It has also sold nearly half its stake in its Indian operations to SAIC, its Chinese partner which will be bringing in a whole host of MPVs, pickup trucks and small cars to India.

But before all that, the Chevrolet Beat diesel will be the car on its radar. This particular test car, caught on Mumbai roads, sans any covers or tape had TCDI badging on the boot, the only visible exterior difference. According to our sources, the car will be ready for launch in the first week of July and could very well become one of the cheapest diesel cars on sale in the country.

The Beat will be powered by a three-cylinder version of the 1.3-litre Multijet that was originally co-developed by Fiat and GM when GM owned a significant stake in the Italian manufacturer nearly 10 years ago. After parting, GM retained its right to the engine and this is, possibly, the first significant use of the engine on a GM-developed product.

The engine displaces roughly 950cc and is good for about 55-57 bhp and about 15 plus kgm of torque. It may not be the most powerful diesel engine on a hatchback on sale in India, but it is expected to be one of the most fuel efficient. If we are to understand, GM is looking to match and even break the fuel efficiency figure of the Tata Indica eV2, currently the most fuel-efficient diesel car in the country by ARAI test standards.

Pricing will be crucial for the car as GM currently manage to move about 2000 to 3000 units of the Beat every month, a figure that could easily double with the launch of the diesel version. We expect the base Beat diesel to be about Rs 30,000 more expensive than the equivalent Beat petrol model, going up to Rs 50,000 to Rs 60,000 for the top-end variants. That could mean that a top-end Beat LT diesel (not the option variant), could be priced well under Rs 5 lakh, ex-showroom, Delhi, making it ultra competitive in a market where the Ford Figo diesel starts at Rs 4.6 lakh, the Tata Indica eV2 at Rs 3.95 lakh and the Maruti Suzuki Ritz LDi at Rs 4.85 lakh. Considering how GM is currently placed in the small car market, we believe that they may follow such an aggressive pricing strategy. Watch this space for further updates.