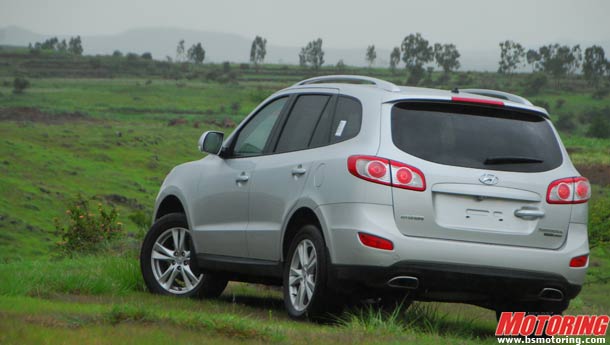 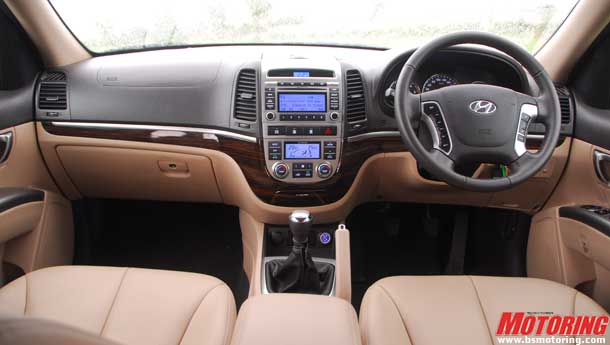 It was the nth time I was turning around to give our photographer the perfect shot. Nothing new to the ritual, so I did his bidding as I turned around the new Hyundai Santa Fe. Inadvertently I gave it a bit too much gas; the front wheels spun frantically and yet it showed close to no signs of torque steer. Torque steer is what happens when a diesel engine unleashes all its torque to the front wheels, momentarily causing them to lose lateral grip. But in this case, despite a powerful diesel sitting on the front wheels, the Santa Fe showed surprising poise, keeping its nose well under control. Was this Hyundai telling me something I should have noticed earlier?

There was something else too that caught my attention as I floored it. There was close to no diesel clatter in the cabin, except a distant turbo whine that wasn’t even tickling the nice surround sound system in the SUV. At that very moment, it seemed like Hyundai had not just caught up with the competition, but had become a company whose engineering skills have gone up a couple of notches.

The Santa Fe isn’t going to cause Hyundai’s plant in Sriperumbudur to become a beehive of activity. But what it will do, is change the way you and I look at luxury cars from the world’s fourth largest automaker, in India. For a start, the new Santa Fe isn’t a five-seater like the long gone Tucson, but a proper seven-seat offering. At 4.66 metres, it is just a tad longer than the Honda CR-V, but a bit shorter than the Toyota Fortuner. Unlike the Fortuner that looks big and beefy, this one looks particularly long and rather Audi Q7-esque in its proportions, especially when viewed in profile. But it hides its bulk very well, thanks to its rising waistline, a lower bonnet line and a sloping roof that curves into the C-pillar. Some may not like its softroader-ish stance, but it sure looks quite appealing when seen in motion.   From behind the wheel, it wraps around the driver pretty well. Everything on the inside is made of good quality materials. Blue is the omnipresent theme, just like in the i20 hatch, and the combination of colours and materials seems to somewhat gel in here. The dark wood tone matches the overall black theme, while the lower half of the dash and the leather trim are in beige. It feels quite loaded too, with a dual-zone climate control system, an audio system with aux-in and USB ports, cruise control and stereo controls on the steering and lots and lots of 12-volt sockets (which we can’t understand why). The seats are particularly large and comfortable in both the front and second row and legroom is pretty good too, while the third-row is strictly for anyone south of five feet. Hyundai have offered ESP, ABS as well as ten airbags spread across all three rows as standard — something we haven’t seen in any other SUV in that segment.

It also has the most powerful engine in its segment, a compact 2.2-litre common rail diesel unit with 194 bhp@3800 rpm and a very impressive 43 kgm of torque between 1800 and 2500 rpm. These two figures are not only better than the competition such as the Toyota Fortuner and Ford Endeavour, it also makes the similarly sized engine in the Land Rover Freelander 2 feel a bit, er, short on power .

All of this makes the Santa Fe a really quick SUV. The company claims a 0-100 kph time of under 10 seconds and it can genuinely crack 180 kph given the right stretch of road. Sure enough, the seat-of-the-pants feel tells you it is quick. Due to the flat torque curve, the mid-range delivery feels extremely creamy and even when pushed, the engine feels rather refined, almost like a petrol motor. The six-speed manual gearbox is a joy to use, though its similarity to the one found on the i20 can't be ignored. It slots positively and because it has one more ratio than normal, it is designed to return pretty good efficiency. This also gives it good driveability, so shift into sixth at under 60 kph and it pulls cleanly. It definitely feels like it has the best diesel drivetrain on an SUV under Rs 30 lakh today, no doubt about that.   Even while the car is on the move, it does seem like Hyundai have spent a lot of time engineering this one. Since it has an intelligent all-wheel drive system, the Santa Fe provides torque to all four wheels only when the sensors detect loss of grip. This is not very different from the system found on, say, the CR-V. But what the Santa Fe offers is four-wheel drive lock mode, that allows you to keep it in permanent all-wheel drive, especially useful when conditions are precarious. All of which explains why the Santa Fe can control torque steer well. The steering is well weighted, but it lacks the additional feedback we’d have liked to see. The general tendency of the SUV borders between being neutral to understeery, but at no point does it become bothersome for either drivers or passengers, with only some roll setting in. Like the Tucson, it connects with the driver rather well and it allows you to carry more speeds into corners. Ride quality is good in most places and firm in some others, and the units on the rear are self-levelling types to compensate for weight changes, like the Chevrolet Captiva.

Which brings us to the question — where does Hyundai plan to position it? Since the Santa Fe will be a CBU, Hyundai might not be able to position it against the likes of the Toyota Fortuner and Ford Endeavour, and we expect prices to range between Rs 24 and 27 lakh. This will take it into the Nissan X-Trail and Honda CR-V territory, which too are CBUs. But the Santa Fe is more practical thanks to its seven-seats and has a bomb of an engine under the hood. It also drives and handles like a more mature SUV. And just like our photographer, it looks like Hyundai might get their perfect shot this time around, U-turns or not.

CLICK ON NEXT TO SEE THE HOW THE SANTA FE FACES OFF AGAINST THE COMPETITION.   TOYOTA FORTUNER

The Fortuner is the best-selling SUV in the Rs 20-30 lakh bracket today and it doesn’t look like that is going to change for a while. It is a beefy seven-seater SUV based on the IMV platform like the Innova and has a 3.0-litre diesel engine with 167 bhp on offer. The body-on-ladder chassis means it is designed to off-road and it does that pretty well. Its price of just under ' 20 lakh, ex-showroom, Mumbai, is attractive for those who want a Toyota SUV, but can’t afford the Prado. The only drawbacks are that it dynamically isn’t as adept and the interiors don’t feel as well appointed.

Like the Santa Fe, the Captiva is a soft-roader that can handle some amount of off-roading. It too boasts seven seats, handsome lines and some decent dynamics. Power comes from a 2.0-litre common rail diesel with 148 bhp on offer, which makes it pretty quick. The Captiva also comes with a six-speed automatic with four-wheel drive as standard. It’s priced reasonably too, at ' 18.1-19.9 lakh. Trouble is, the Captiva doesn’t feel as special on the inside, nor does it do anything spectacularly.

It is the only other petrol SUV, apart from the Mitsubishi Outlander, but it does set some benchmarks in terms of refinement, build quality and overall road dynamics. The CR-V is the most expensive here at ' 23-25 lakh, thanks to it being a CBU. The CR-V’s 2.0-litre and 2.4-litre petrol motors are nippy and refined, but not necessarily the most efficient. Designed as an urban utility vehicle, it isn’t meant to be taken for any serious off-roading. Lack of a diesel option has hurt its chances over time.