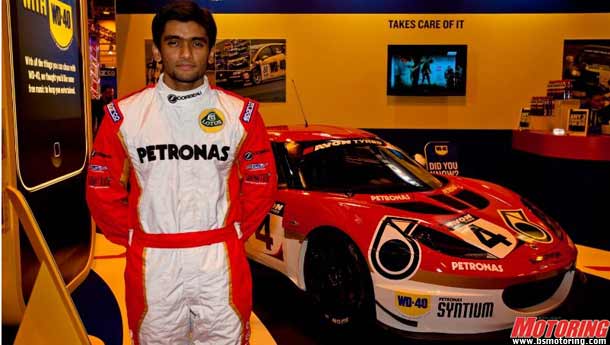 After winning the first ever Volkswagen Polo Cup in India, Sailesh Bolisetti got a full season of racing in the Scirocco R-Cup in Europe. But the transition to racing in Europe wasn't easy for the Indian driver. He had to contend with learning new tracks, a much more powerful car than he was used to and deal with the lack of practice.

Looks like he caught someone's attention in any case, because Sailesh has been offered a drive with Lotus Sport UK in the 2012 Avon Tyres British GT Championship. Sailesh will race the Lotus Evora GT4 which took three wins last year in the team's maiden season.

Commenting on his appointment Sailesh said: 'Being associated with such a well-known name in racing is a great opportunity for me, especially one with such a rich pedigree across a uniquely wide range of disciplines. But I don’t take it as a pressure, I take it as a privilege – I’ll be driving for the same brand as some of my all time heroes and sporting legends and I’m really looking forward to it.'

Another reason he's looking forward to racing in the series is because of the ample amount of practice time he'll be getting. In the week before each race, drivers are allowed one practice day, and during the race weekend itself, there is an hour and a half of practice time.

British GT’s seven-race season kicks off at Oulton Park on April 7. In addition, Sailesh will contest the Indian i1 Super Series in the Middle East and Asia, in order to get as much experience under his belt as possible.

If you want more updates on Sailesh and his racing career, make sure you stay tuned to bsmotoring.com or you could also go here: www.facebook.com/SaileshBolisettiRacing