Maruti has finally launched the S-Cross at an initial price of Rs 8.34 lacs to 13.74 lacs, ex-showroom New Delhi. This is quite competitive when compared to the likes of Hyundai Creta, Renault Duster, but seems overpriced when considering the Ford Ecosport. Apart from the price, there are other credentials that we have taken for comparison. So, here is how Maruti’s crossover fares against the competition.

When it is the compact SUV segment, size does matter and S Cross gets plenty of it. The car is bigger than the Creta by 30 mm and shorter than Duster by a mere 15 mm. EcoSport is way behind here with its under 4-meter size, but that is what helps it escape extra duty that the others can’t. Besides, the wheelbase of S-Cross is more than EcoSport and Creta that in turn helps liberate more cabin space. 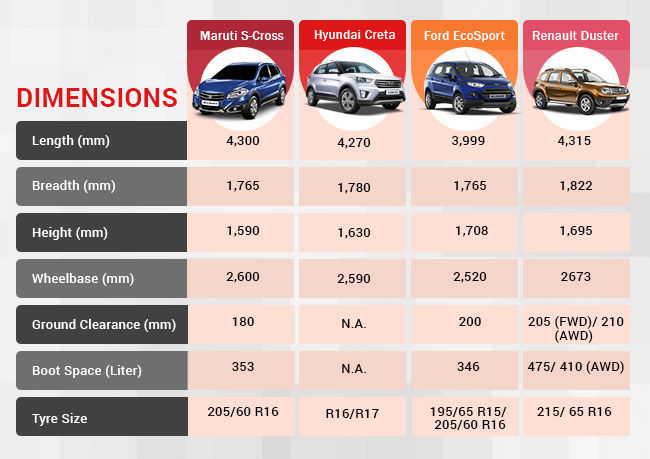 On the downside, despite a large size S Cross doesn’t appeal as the Creta, Ecosport or the Duster do with their SUV looks.

The S-Cross is loaded with plenty of features like the touchscreen multimedia and navigation system, automatic climate control, rear parking camera, engine start/stop button, steering mounted controls, leather seats, all black interiors and cruise control. On the outside, it gets projector headlamps with DRLs as a standard feature.

Under the hood, it gets the 1.6-litre DDiS320 with 120 PS of power and a best-in-class torque of 320 Nm. Other than this, it gets a 1.3 DDiS200 motor in the modestly priced variants and no petrol engine is offered. 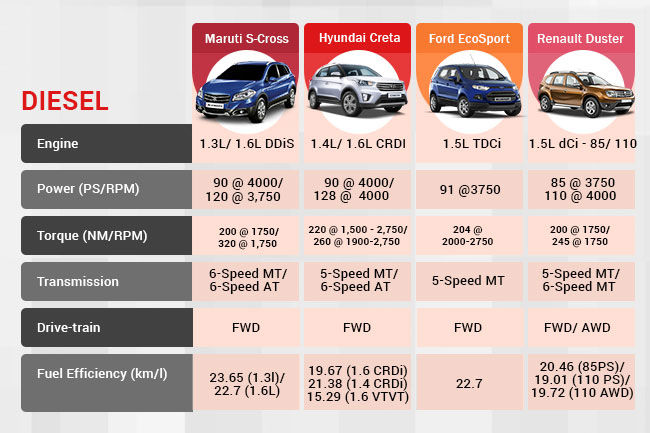 When compared with others, Duster leads with its 210 mm ground clearance and AWD option when the off-road ability is considered. While Creta has a style statement of its own with those 17-inch diamond cut alloy wheels. Ecosport is great on options with a plethora of features both on the inside and can be considered as the most value for money product here.