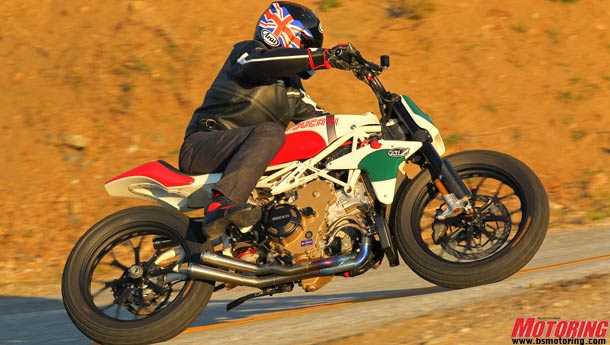 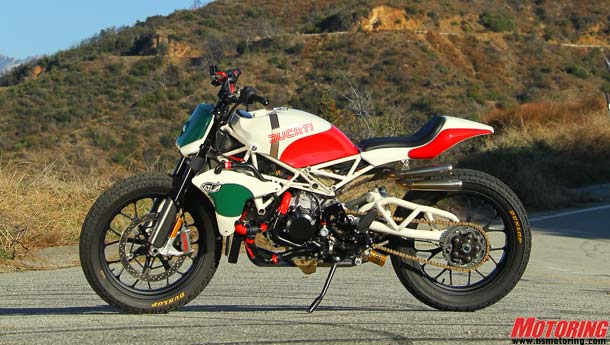 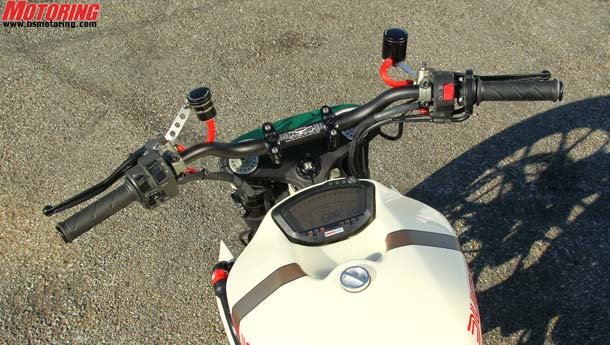 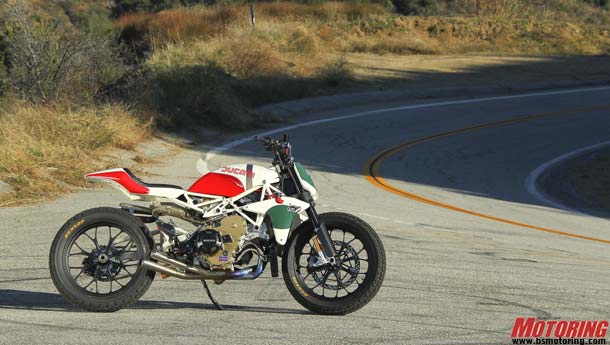 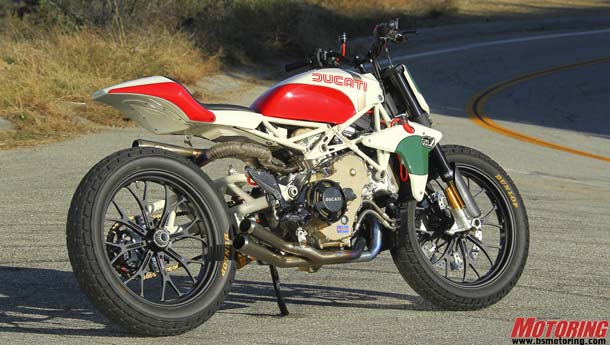 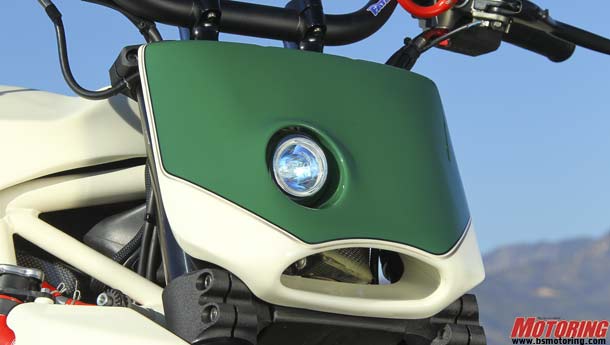 The Ducati Desmosedici RR is the most desirable series production motorcycle ever made. Full stop. No other bike has so faithfully translated the performance and allure of Grand Prix road racing in streetlegal form to a highway near you. It’s a thinly disguised, MotoGP-winning factory GP6 track machine, a true racer with lights, the ultimate street legal expression of the Italian firm’s sporting credo. It’s the Mona Lisa of motorcycles.

Still, imagine sneaking past the security guards at the Louvre in Paris, and drawing graffiti on the real Mona Lisa – a neat goatee beard, maybe, and a pair of glasses. That’s the sort of sacrilege of a two-wheeled work of art which some horrified purists reckon Roland Sands has accomplished in creating the Desmo Tracker – his transformation of one of those 1,500 MotoGP replicas into a high-barred hotrod, modelled on a US flat-tracker, complete with knobbies, and totally devoid of the Desmosedici RR’s curvaceous bodywork.

In creating the world’s fastest dirtbike – as well as the ultimate in canyon-carving cool, Roland Sands – himself the owner of a Desmosedici RR with serious track day mileage and canyon time under its wheels – achieved a personal ambition. Roland’s always wanted to do something to a V4 Desmo, just not with his own RR, which is perfect the way it is. He hoped that someone would walk in with a crashed Desmo and ask RSD to go for it, but never did he expect to have the opportunity to do it with a brand new bike.

But then Justyn Amstutz came calling, and the stripped-down Desmo Tracker came into being. RSD’s job was to combine the tangential terms, MotoGP and dirt-track, into something that was ready to ride, with a push button starter and lights, comfortable ergos, street and dirt worthy suspension, and 180-plus horsepower on tap, while retaining the best of the original design. Roland thinks he’s achieved that goal.

No Desmosedici RRs were harmed or mistreated in the making of this motorcycle, meaning that all the original bodywork and other parts were preserved to allow Justyn to use these as spares in case he crashes one of his other two such bikes, and indeed Roland insists that the Desmo Tracker can be switched back into an RR at a moment’s notice – okay, make that two moments.

With an intention of maintaining as much of the stock bike as possible, only a few easily replaceable tabs have been knocked off. A different set of offset triple clamps hold the stock but RaceTech revalved 43 mm Ohlins forks, in the process delivering 45 degrees of steering lock at either end to provide for dirt tracker-like riding dynamics from what was essentially a GP bike. This, however, came at a price – reduced trail – which was easily compensated for by the 19 incher wheels that replace the original 17-inch front and 16-incher rear hoops.

RSD also discarded the original carbon fibre subframe, and fabricated a replacement from chrome-moly tubular steel, on which they’ve mounted the flat-track styled seat, tail section and three-gallon fuel tank, all created in aluminium. The original Digitek dash has been incorporated into the front of the fuel tank, with the Magneti Marelli ECU now located in the tail section, and protected from exhaust and engine heat with appropriate shrouding. While the Desmo Tracker is registered for the street, RSD hasn’t got round to fitting a licence plate holder yet. I expect you can guess why – although when Justyn starts riding it to work, presumably they’ll have to rectify that!

Unlike the original Desmosedici RR, which employed a fat, conventional twin-sided swingarm born of its MotoGP daddy’s need to handle the grip delivered by slick tyres, Roland decided the Desmo Tracker should have a trademark Ducati single-sided item, with one of the two Performance Machine cast aluminium dirt track wheels mounted at the business end. The RSD designed and fabricated swingarm, again made with chrome-moly steel tubing, adds 38 mm of extra length to cope with the difference between the 19-inch rear tyre now fitted, and the 16-inch original, yet employs the original Desmosedici RR linkage to work the stock Ohlins monoshock.

Riding the RSD Desmo Tracker is a really schizoid experience – and that’s the case even before you hook it into gear. You’re sitting really comfortably aboard it in a typical street tracker riding position, with high but quite flat ’bars and not excessively high footrests, in what seems like an incredibly normal, non-threatening stance. Then you thumb the starter button – and all hell breaks loose as Jekyll becomes Hyde, and the so, so angry salvo of sound from the V4 Ducati motor thunders through the quartet of FMF exhausts, echoing off the mountainside as you blip the throttle and it settles to its high 1,500 rpm idle speed. With no bodywork, you can hear the trademark rattle of the dry slipper clutch at idle even above the engine noise, overlaid with the whine from the gear train driving the camshafts, and the straight-cut primary drive. Blip the throttle again, and there’s a high-pitched whistle as the intakes suck air – and believe me, you need to take all this in before you move a metre, because once you’ve engaged bottom gear on the race-pattern gearbox, everything else becomes secondary beyond staying aboard and keeping the wheels more or less in line. Most of the time, anyway..

If you thought the stock Desmosedici RR already delivered awe-inspiring real-world performance – as I did, before I rode this bike – the Desmo Tracker takes this to another level, for two reasons. One is the lighter weight, which even with the RR’s unchanged long-legged gearing is nominally good for 302 kph (well, if you could ever hold on to the high-rise handlebar that long!) delivers even more mind-altering acceleration; the other is the way the more upright riding position makes third gear power wheelies a fact of life if you wind the light-action throttle hard open. This probably would be the same in fourth or even fifth gear, too, except I ran out of room – and, I’ll admit, bravery too, surrounded by rock faces with zero runoff – in trying to discover this.

Instead, I’ll let Roland Sands tell you what it’s like to ride this bike in such circumstances. ‘I haven’t taken it over 160 kph yet, but I’ve ridden it in anger from first to third gear on the pavement, and I haven’t noticed one little hiccup as far as the performance goes,’ says the former AMA 250GP champion, with stars in his eyes. ‘You just stand it up on the narrow rear tyre, and run it till the thing hits the rev-limiter and then shift it – it’ll just spin the tyre, and hit the rev-limiter again. Then when you’re grabbing second, it’s doing the same thing, and you’re just trying to get it out of the corner and stand it up and let it slide, and just pray it doesn’t do anything weird. This gets your attention in a whole different way than anything else I’ve ever ridden before!’

Amen to all that, especially the bit about the power of prayer – although honestly, the strange thing is that those dirt-track tyres ended up feeling amazingly controllable through the endless turns of the Glendora Mountain Road. When it does spin up – and spin it will – it does so very controllably, and side grip is really excellent, especially from the fat front on its skinny three-inch rim, allowing you to use surprisingly high turn speeds without ever having to remotely worry about ground clearance as you chuck the Tracker on its side, before using the great leverage from the Renthal handlebar to lift the bike upright again on the exit before feeding the power in hard.

It is really noticeable how strongly the Ducati V4 motor enters the powerband above 5,000 rpm – the power comes in as strongly as a current factory World Superbike racer, yet without the extra degree of electronic management that the five intervening years since it was manufactured, have produced – surprisingly, the Desmosedici RR never had any traction control! It’s a huge thrill to ride – provided you remember the throttle works both ways, and short-shifting to ride the super-meaty torque curve is probably the hot tip for extracting maximum performance along a twisting mountain road like the one I was mostly using. It’s still fun to run it out to the limiter occasionally, though!

One really noticeable benefit of the street tracker transformation is how the Ducati now steers so sweetly and easily, more so than the original RR with the reduced leverage from its clipons, plus its heavier weight. The Desmo Tracker is unbelievably responsive for a four-cylinder motorcycle in flicking from side to side through a series of turns. Thumbing the starter button on the Desmo Tracker concocted by Roland is the gateway to an altogether new level of thrills on two wheels – there is literally nothing else like this bike in the motorcycle universe, combining literally awesome performance with improbable accessibility, verging on practicality. Job done, Roland – take a bow together with your guys at RSD for creating such a thrilling, exhilarating, and totally improbable ride.

As if this bike wasn’t hard enough on the critics, Roland informs me of yet another Ducati project that he’s going to be working on. This time, it’s going to be a future-retro, wait for it, Panigale Cafe Racer. The owner’s got one on order, he’s ready to go and so is RSD. Roland opines that there’s probably not a better Ducati to strip naked than this one. In his words, ‘It’s so beautiful and so simple, so small and clean that it really won’t be too tough to just massage one and keep everything about it, like all the performance and suspension and stuff, and then just simplify it, make it naked basically. That one’s going to be sick! And I know all the Ducati guys are going to hate me even more, and I don’t care, it just makes me smile!’Don’t say you weren’t warned, Ducatisti!