Royal Enfield motorcycles-maker Eicher Motors' shares, which have scaled Himalayan peaks over the past few years, went downhill on Friday when promoters announced they had sold 4.2 per cent stake in the company for Rs 2,100 crore.

Three promoter entities, including Anita Lal, mother of managing director and chief executive Siddhartha Lal, have sold 1.14 million equity shares in a block deal. Siddhartha's aunt, Rukmani Joshi, and The Eicher Goodearth Trust are the other promoter group shareholders who have sold their stake. The aggregate realisation of the sale was Rs 2,100 crore, Eicher said in a regulatory filing on Friday.

Each share was valued at around Rs 18,400, a discount of 6.8 per cent to Thursday's NSE closing of Rs 19,753. The stock managed to recover from its lows of Rs 18,380 to close at Rs 18,960 on Friday, a loss of four per cent. "The sale has been done to provide liquidity to the promoters, and the proceeds will be utilised for personal uses, such as portfolio and other investments, and for charitable purposes," the firm stated. 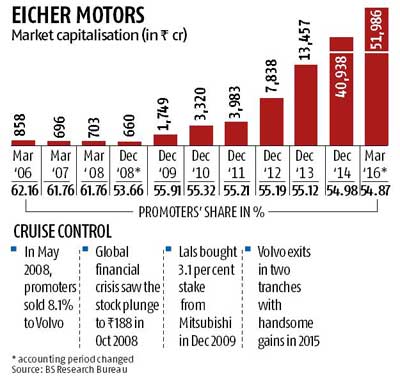 It is not clear how much of the raised money will be used for investments and how much for charity. "The promoters of Eicher have focussed on motorcycles and commercial vehicles and it has paid off. They do not seem to have any other aspiration. It makes sense to sell a small stake and do portfolio investments, which may also include a property. After all the recent growth in earnings, charity is a welcome move," said investment advisor S P Tulsian.

Eicher runs Goodearth Education Foundation, which works with government schools in various states. It also assists an eye hospital in Delhi and runs a school in Himachal Pradesh.

Post Friday's announcement, the promoters hold a 50.67 per cent stake in Eicher. Promoters have assured shareholders they would continue holding a majority stake in the company.

"We believe there is a huge growth potential for Eicher Motors in its domestic and overseas markets," Lal said.

Investors, however, seem to be worried if the stock, which grew about 100 times in value since the lows it touched post-Lehman crisis, has touched its peak levels now.

The stock's stunning performance has been rewarding for the promoters. Looking back, the run itself was flagged off by one such promoter sale eight years ago. In May 2008, the promoters sold 8.1 per cent stake to Swedish heavy vehicle giant Volvo for Rs 157 crore.

Thus, not long ago, the entire company was available for less than Friday's block deal value - Rs 1,936 crore to be precise.

Even this was because of a premium valuation offered as part of a larger deal that included a slump sale of Eicher's commercial vehicles unit to the new joint venture. Volvo bought promoter stake at Rs 691.68 per share when the market price was hovering around Rs 320 a share mark.

This had brought the Lal family stake to 50.1 per cent. However, a 3.56 per cent holding with Japanese partner Mitsubishi Motor Corporation meant that the promoter holding was at 53.66 per cent.

Though the Volvo deal came with a buyback offer for public shareholders, funded by the cash that came out of the slump sale, global financial crisis, a few months later, saw the stock plunge to Rs 188 in October 2008. At that price, Eicher Motors' market capitalisation was just Rs 526 crore.

However, the restructuring and Lal's focus on the two-wheeler business began to pay dividends. After two flat years in FY07 and FY08, Eicher saw profit-after-tax (PAT) zoom by 33 per cent. And there was no looking back. Foreign investors' interest started building up steadily. Foreign investors held 30.07 per cent stake in Eicher Motors at the end of March 2016, data from BS Research Bureau show. Eighteen months after the entry of Volvo, Mitsubishi ended its 27-year partnership with Eicher. The Lals bought out its entire 3.1 per cent stake. Lal had termed this purchase of stake as "consolidation".

"For more than 10 years, we did not have a working technical relationship with Mitsubishi… They will no longer be listed as a promoter of our company," Lal was quoted as saying in a The Times of India report. The shares had rallied 13 per cent after the Mitsubishi exit, to close at Rs 670 per share. Reports said the family entities had bought the 0.84 million shares held by the Japanese partner for about Rs 50 crore. As Bullet sales went into cruise mode, the top line of Eicher grew three-fold between 2009 and 2014, to Rs 8,738 crore. PAT zoomed from Rs 83.39 crore to Rs 615 crore.

The numbers had more to do with Royal Enfield Bullet and less with the commercial vehicles business. In FY16, a year when most two-wheeler makers struggled, Bullet sales in domestic market jumped 54 per cent, to 498,791 units. Eicher earned a consolidated profit of Rs 1,452 crore on sales of Rs 15,428 crore in the fifteen months ended March 31, 2016. While Royal Enfield's share in sales is only 40 per cent, it contributes a lion's share of 85 per cent to the profit.

By May 2014, the stock had grown 10 times from the time of Mitsubishi exit. As more investors started discovering the stock, valuations began to look fuller. Even an exit by Volvo in 2015 did not deter the stock. Volvo itself made Rs 3,600 crore for its investment of less than Rs 160 crore.

On many occasions in FY16, Eicher's market cap surpassed Hero MotoCorp, the country's largest two-wheeler maker. Friday's promoter sale looks too small a bump in the context of the company's Rs 50,000 crore-plus market cap to stop the cruise of the Bullet.