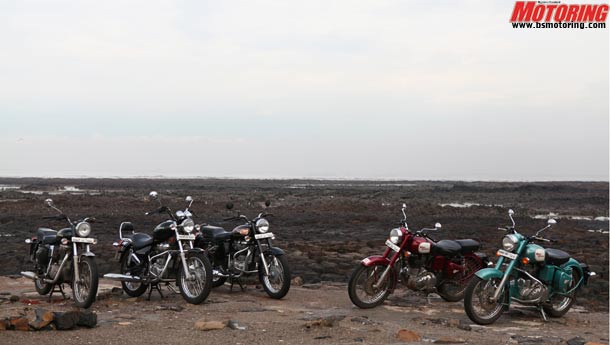 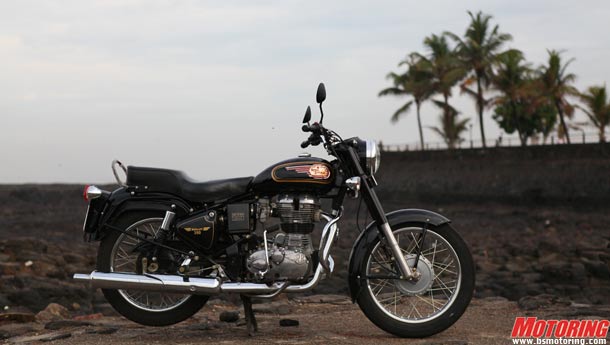 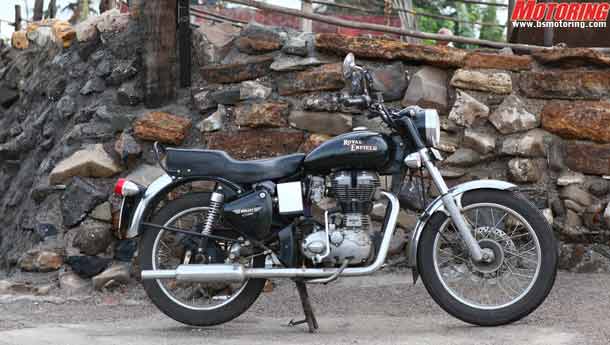 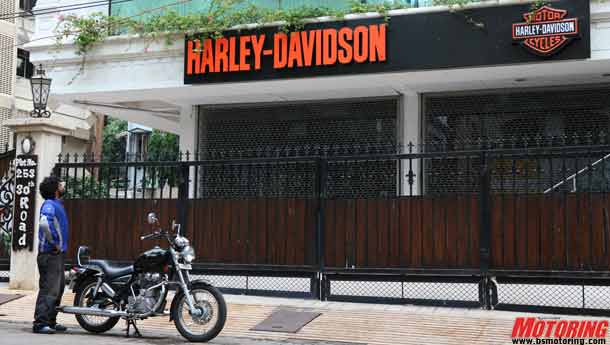 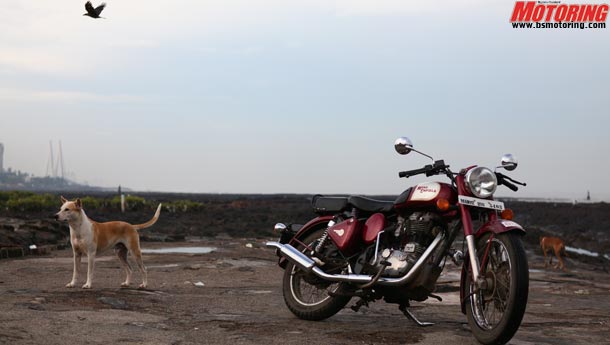 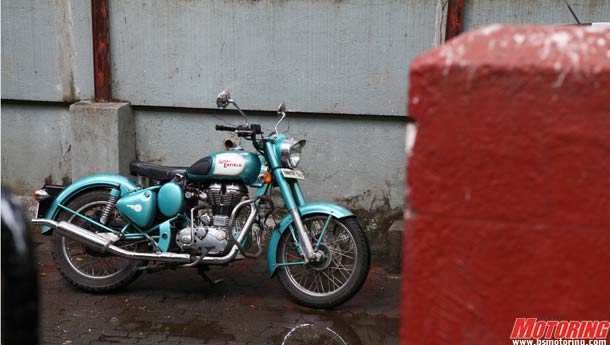 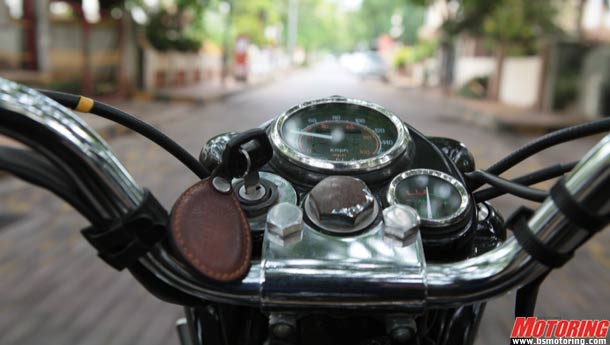 Welcome to British Iron Roulette. First, a few facts: 1. Every two minutes there’s a Bullet rider pushing his broken-down bike up a lonely road. 2. There’s usually enough oil on a Bullet’s engine for the USA to consider attacking it. 3. Bullets make their riders go weak in the knees – through endless frustrating kicks. 4. Contact Breaker points break more hearts than points. 5. Finding true happiness with a Bullet is like finding the pot of gold at the end of a rainbow. 5. Bullet riders seem to find it. To them, it’s a fairytale that never ends.

The new UCE Bullets have been around for a while now, and are said to change all of this – except that last part, of course. The soul of the old engine without any of its ‘quirks’, it’s said. Change, it seems, is inevitable – even for Royal Enfields. What’s more, they’re even said to be reliable and easy to maintain. Naturally, die-hard Bulleteers are outraged at this sacrilege that makes life easier for them and attracts riders of other ‘lesser’ motorcycles into their fold. I, however, welcome any change that makes REs easy to live with and decided to verify that claim. Why? Because a ’75 350 has owned me since before I was born. Let’s get down to the shooting, shall we?

The Bullet is perhaps the motorcycle closest to my heart. So, it’s only natural that I rode it the most. For this one, the cogs of time ground to a halt in the ’50s. Even with the new engine, it manages to look suitably old-fashioned. Old-timers, the actual ones as well as the old at heart, will feel overwhelming sadness at the absence of the gear lever on the right side and the neutral finder. Their eyes will be tearful as they hear the increased mechanical clatter of the new motor.

But when they ride it for three days in heavy rain without so much as a splutter, they will see the new-found reliability. They will gasp in amazement at how it feels so much lighter than the older one, even though it still weighs 180 kg. Their rattled bones will thank the new motor for its smoothness. And every time they open the tank, they will be shocked to see the amount of fuel left in it. The Bullet proves to be an easy-going and friendly motorcycle. And the best part is, nothing else has changed.

That headlight nacelle still looks bloody beautiful. The front drum evokes equal proportions of nostalgia and white knuckles when you try to stop in a hurry. Ride quality is still excellent. Even though the power has increased from 18 bhp to 19.8 bhp, it still feels the same as before – which is around 4 bhp. Long story short, it still is a Bullet. It’s not the same, but it’s as close as you can get to the original one. Even the tank is still pinstriped by hand by a third-generation Bullet tank painter. His grandfather must’ve painted my bike’s tank. Some day, I shall ride my bike to the factory and meet him. The Bullet is dead. Long live the Bullet.

PS: The CB points may have left the building, but the thump still lives. Just as soon as you’ve replaced that damned exhaust.

The Electra probably should’ve been honourably discharged in the last decade. But I suppose there are motorcyclists who don’t want to see the world through a sepia tint, but want the thump following them around anyway. It looks fresher than the Bullet, though I still associate the Electra with the early noughties; I wanted a silver one back then. I still do. I think it is certainly the most comfortable Enfield to ride – the ’bar is nice and high, while the seat is stepped just right. Gas-charged rear shocks make ride quality even better, while a front disc keeps your blood pressure low. For those who want a comfortable Bullet, this is it.

PS: A good all-rounder. But not as evocative as the Bullet. Or as desirable as the Classic.

At some point, RE decided to give in to the ‘enthusiast’s’ perceptions – that RE is the H-D of India – and make this anomaly (Kyle can’t pronounce that word, by the way – he says alimony). Every time I see one of these, I can feel the ghost of Redditch turning in its grave. Bullets are meant to be dignified and charming Brits, not wannabe lazy Americans. Okay, it sells well, but I think it’s the most ungainly Enfield of them all - that ICBM exhaust really doesn’t help matters any. It is also comfortable and all of that, but I won’t let that distract me either.

PS: I’ve a feeling that I wouldn’t be so mad at the Thunderbird if RE made a scrambler and a cafe racer alongside it. Then I could just ignore it, no?

Has got to be the best-looking Enfield made since they landed on Indian shores way back in the 1949. Um, the 500 too, that means. Just the way it looks is enough for me to start considering EMI options. Apparently, this aptly named Enfield is the one that gets the most attention in an RE showroom. And why not? With the optional upswept exhaust that flows more freely and a smaller diameter 18-inch rear, this version has the right sound and additional performance over the Bullet, the Electra and the Thunderbird.

However, the rider’s seat is still a bit too flat to provide any reassuring support to your backside. And that optional pillion seat really mars those classic lines. I surely wouldn’t fit one. And then proceed to ride around with pillion footpegs sans the seat. And again, the front 19-incher is a ribbed pattern tyre – not cool for hard braking and hard cornering, no matter how many hardened Bulleteers swear by it. Just fit a better one, RE!

But when it comes to build quality, thanks to the two Classics, all the other Enfields can again claim to be built like guns too. RE has got it very right with the Classic and I hope they go on to better things. Like a scrambler and a cafe racer, for instance.

PS: Give us a long-termer, RE.

500 is a nice number, no? It makes your heart race and your spine tingle (yes, it’s the vibes), and makes for a genuine hot rod of a motorcycle, I tell you. A fusion of pure beauty and brute power without peer. I’ve never seen that familiar speedo needle nail those numbers with as much aggression as on the C500. What’s even better is the way it feels like a direct descendant of the older cast-iron engine, more so than the 350 UCE – even the kick requires as much effort as the older ones!

That 4.21 kgm of torque strains at the leash in your right hand. More often than not, it succeeds in breaking free. And then it runs wild until you’re left with the biggest pushrod buzz you can get this side of a locomotive. Adding to the involvement is a flaw – the front tyre is an 18-incher as opposed to the 350’s 19-incher, and that makes the front weave at anything above 90 kph. Even the stickier tyre doesn’t help. Also, even though that fuel injection system works pretty well, I’d prefer a carb feeding that stonking motor, just so I could fiddle with it no end. Despite these two niggles, the Classic 500 is a motorcycling experience that none should be deprived of.

Looking at it elicits loving sighs. Plugging the throttle provokes adrenaline-fuelled howls. I can imagine going off on a long ride and alternating between the two until I run out of road. Though I’ve never ridden the original performance Enfields (the Meteors, Super Meteors and Constellations), I know that this one is the spiritual successor to them all. Now RE, give us the twins we’ve been waiting for.

PS: The others might be subjective, but this is a true Royal Enfield for everyone. Sigh.

My Bullet takes me back, in spite of not having been born then, to a time when the first propeller-powered planes took to the unexplored skies. A time when the only electric things around were CB-point ignitions and lightning. It’s a firm cast-iron, 350cc upper cut to the ‘progress’ that time has wreaked upon us.

It’s been said that a Bullet’s tickover is the mechanical rendition of the human heartbeat. The only thing a child hears in its mother’s womb is her heartbeat. Then, it is born and soon it hears the thump of a Bullet, and it is drawn by an instinctive affection to that sound. An affection that’s been formed even before it was born. It doesn’t stand a chance. The story of every Bullet rider, it’s said. No wonder the number of people who want Bullets has never waned. Even more so today, when the forbidding reputation of older Bullets is being rapidly overhauled by these new Enfields.

Okay, the gear lever’s on the wrong side and CB points have long disappeared. But a Bullet is still a Bullet. You open your heart to it and let it own you, sometimes even before you are born. And even though the new generation of Royal Enfields have made a move towards becoming more acceptable and to conform with current-day standards, they remain a happy escape, a release from the efficiency-propounding life that living in today’s world is. And notice that I didn’t even once say ‘character’.