Royal Enfield — the maker of popular Bullet motorcycles — has said its bookings have come back to pre-Covid levels due to strong demand from rural areas. The company also said it would go ahead with its planned capital expenditure (capex) and plans to launch one vehicle every quarter.


Vinod K Dasari, chief executive officer, Royal Enfield, said: “The majority of the infrastructure work is over. The proposed capex is really largely on the product side. So, the products are where the investments are going to be made.”


Lalit Malik, chief commercial officer of Royal Enfield (a unit of Eicher Motors), said the capex would be broadly in line with that of last year (2019-20).


While the management did not disclose any numbers, in the previous interactions they said 2019-20 capex was around Rs 700 crore.

Dasari said all launch plans were slightly delayed because of the Covid-19 pandemic. “We will start launching them from the upcoming or next quarter. And we practically have a new product almost one every quarter,” he said during an analyst call.


Siddhartha Lal, managing director of Eicher Motors, said for the next 5-7 years, they will remain in mid-sized category, which is what they are in right now. 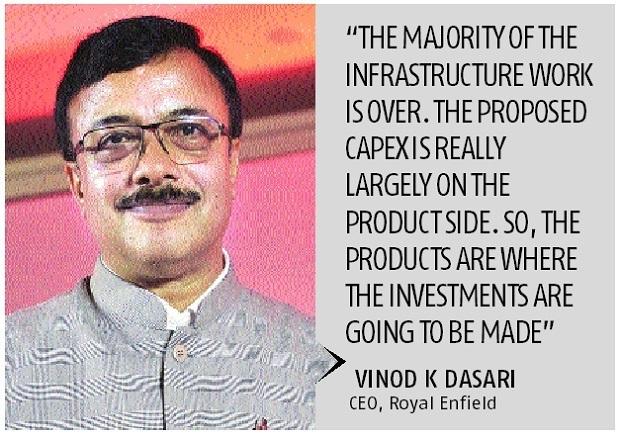 On the company’s vision of becoming a global motorcycle manufacturer, Lal said it always comes back to that Royal Enfield will make motorcycles that will be globally relevant, but those will also have to be relevant in India. “..we are always after scale in any platform that we enter. And if you want scale, India has to be an important part for the next 5-7 years to show.”


Commenting on demand situation, Dasari said bookings are now at pre-Covid levels of around 60,000 a month in India. He said the company’s strategy to tap demand beyond cities through small format stores — Studio stores — has helped, and it was one of the growth drivers.


In the last quarter, the firm added over 100 standalone small-format stores, taking the total to around 600 stores.

Nearly 90 per cent of the company’s 1,521 touch points in India (921 dealerships and 600 studio stores) are now open. In manufacturing, the company’s capacity utilisation level was around 40 per cent.