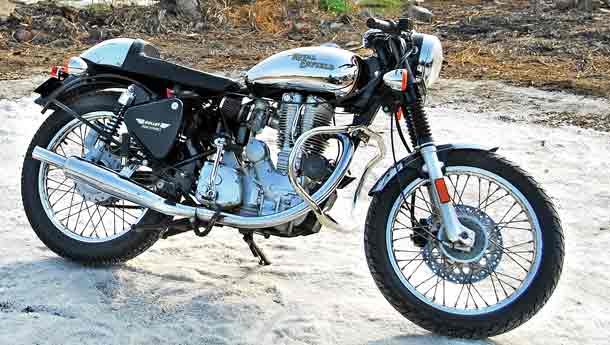 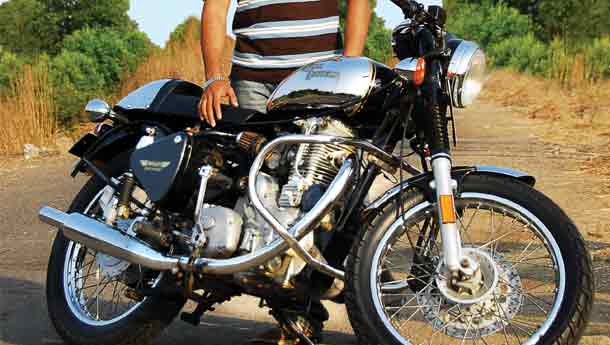 When you hear the words ‘modified Bullet’, images of raked out forks, extra fat tyres, ape-hanger bars and shoddy paintjobs invariably come to mind. The Bullet has been the platform for countless Hardley Dravidson (sic) variants for ages and is now a total cliché. But a Royal Enfield-based cafe racer, with tons of chrome in all the right places, hits the spot quite nicely and when Shumi told me that I was going to ride one, I was skipping around like a schoolgirl with a sugar rush (Kyle’s six feet tall and 90 kg, so that’s quite an image – Shumi)!

Cafe racers are as British as Yorkshire pudding and Big Ben. They were iconic in the 1960s, when young bikers would race bikes that were lightning quick and distinctive, with most racers being avid members of the ‘ton up’ club – the ‘ton’ being 100 miles per hour or 160 kph. These blokes came up with something great called ‘record racing’, where the rider would race to a predetermined spot and back to the cafe before the song being played on the jukebox could end. Yeah, sounds awfully quick, right?

Cafe racers were built for speed and handling, usually at the expense of comfort. A typical cafe racer had narrow, low swept handlebars that were either clip-ons (two individual bars that clamped onto each fork) or clubmans (single piece handlebars mounted on the stock mounts) in addition to having long fuel tanks, rearward placed humped single seats, rearset foot rests and foot controls to allow the rider to tuck in. The most famous and desirable cafe racer was the Triton, which was a potent combination of a Triumph engine, for exhilarating propulsion, with a Norton Featherbed frame for superior handling.   Meet Gordon D’souza and his very own home-brewed cafe racer. It’s based on a 2005 Royal Enfield Machismo 350 and is a clean looking machine with buckets of chrome and glossy black paint in the right places – so very ‘60s. This machine is one of the really few Bullet-based cafe racers I’ve seen that appears credible and authentic. It isn’t a mere remove-and-replace job and everything fits in very aesthetically. The tank is stock and the rear seat hump is just the right height, so as not to ruin the lines of the bike. The mudguards have been chopped and integrate very nicely with the overall theme of the bike. It looks the part and certainly sounds like it too – although the Goldstar replica silencer sounds just a little tinny.

The ergonomics aren’t really the best I’ve experienced and like all cafe racers, you wouldn’t be able to do long distances on this bike without your back and wrists going on a protest march. The footrests could have been a wee bit more rearward, to ease things a bit for my back, but they were built for Gordon, who’s a tad shorter than me. The bumstop seat lived up to its name and kept my ample behind firmly locked into place and that felt very reassuring. The frame is untouched, but the low-slung handlebars make cornering thrilling enough to plaster my face with a wide grin. Too bad you guys can’t see it through my helmet! The brakes were typical Royal Enfield fare, but the disc felt a little too numb. I spoke to Gordon about this and got to know that the brake pads have not been changed in the 3 years that he has owned the bike and I suspect that the pads have gotten a tad glazed and hard – nothing new pads won’t fix. The headlight nacelle is stock, but the tail light has been replaced with a Lucas replica and adds a nice period touch to the bike.  Maybe this machine has mainly cosmetic alterations, but the fact of the matter is that I enjoyed riding it so much that I forgot for a brief few moments that it was just a Machismo with a raunchy wardrobe.

The engine was leaking minuscule amounts of oil (and there’s another masterful period touch... they were called Royal Oilfields back then, so why not, eh?) but sounded healthy. The carburettor has been up-jetted to a 120 main jet to compensate for the aftermarket high flow air filter, and the freer-than-stock silencer, livening up the bike a wee bit. It ran well; with the flutter of the near-free flowing silencer and the gasping of the carb sucking in air making me feel that I was going faster than I actually was.

The overall standard of the bike was good but it was a little rough around the edges. A few little details like the scruffy brake pedal and the seat brackets could do with some remedying. But Gordon assured me that his bike is still a work in progress and quite frankly, I can hardly wait to ride it when it’s completed, because that wide grin certainly looks good on my face!