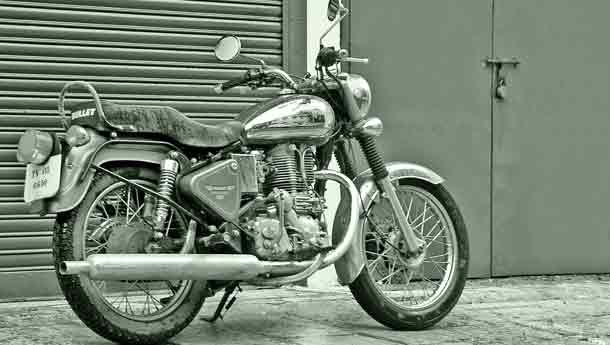 Of course, we’re kidding. But with Pablo’s superb low-light, monsoon-soaked arty-blurry lead shot, the slew of high frequency puns just had to make an appearance. The Enfield Machismo 500 – I’ll keep this brief since JC already covered it in the June issue – is the new flagship Royal Enfield. The bike has been exported for almost two years as the Electra Classic, and is now making a local appearance.

Styling, build & finish
Well, it looks like a Bullet. A retro Bullet, if that’s not an anachronism at some level. I like the flat tool boxes and the chrome tank, though our test bike did have some crinkly pinstriping. I do think, however, that a shorter, more ‘shaped’ exhaust would be classier. I think the 500 was slightly better built than other Bullet’s I've sampled, but at the end of our first elevated speed ride, the front number plate mount and the right-side toolbox lid had vibrated loose. I do think some bits look a bit inexpensive for a six-figure bike – I’ll come to that in a bit.

Engine & gearbox
The engine is an overbored AVL 350cc aluminium motor from a T’bird, including the right-side/five-speed gearbox. That also explains the clatter – evidently, aluminium conducts sound better than cast iron, and turns out louder. It’s quite smooth until the revs come up, and at 120-ish on the speedo, the world looks a bit like the lead shot. To be fair, all big un-counterbalanced singles vibrate. Shifts are good, but need time. Hurrying the 500 along still means not rushing the gearbox.

Performance
23.65 bhp and 4.08 kgm sound impressive. But there is a 185 kg catch. Given that the Bullet uses a non-integrated gearbox and weighs more than a 1000cc inline four-powered superbike, it’s no scorcher. Then again, if you want scorching, you’re looking in the wrong place. The Bullet’s always been a relaxing ride, and this one is too. It isn’t slow, though, and you can relax quicker and faster on the Machismo 500 than ever before in Bullet history. What surprised me, really, is that many times I found myself shifting very early on purpose, even before the torque peak. In this mode, the 500 surges forward with an effortless, liquid grace that I cannot attribute to any other Indian motorcycle. Lovely. And if you must know, the Bullet Machismo 500 will return 32.6 kpl on average, in a town-biased sort of cycle. Highway riding can return 34-36 kpl, though.

Handling
The chassis is exactly the same, which is not really a bad thing. Cramming the 500 into an apex takes a bit of figuring out, especially compared to the near-telepathic newer machines. The Bullet does teach you a thing or two about riding, though. It’s very stable, but not quick to turn-in, so you have to plan corners. Pick good turn-in points, smart lines and it’s beautiful. Cornering a Bullet requires skill and a lot of trust. Get it right, and it feels like an achievement too. At the moment, I think the quality of the rubber and the sheer width of the footpegs holds up proceedings. If I were buying a 500, I’d think about rearsets, and switch to 18-inch wheels and get modern rubber.

Ride quality
The 500 is stiff but not harsh, and its only Achilles heel is sharp bumps, which appear to pass through. Between the weight of the bike and the firm suspension, the Bullet pretty much takes care of everything. The ponderous feel does obscure feedback, and if you hit bumps when leaned over, the 500 will tend to run wide. Oh, and pillions uniformly hate the thin metal grab rail.

Braking
The 280 mm disc out front is a boon. The 500 can stop really well compared to Bullets of yore, but it still won’t outstop a current 150/200. Our test bike was not blessed with the best brakes we’ve seen on a Bullet. I did run into a spot of bother with the rear brake, though. Ten minutes of rain and the drum would make a ‘graunch’ sound that grated on my nerves. No performance issues, so after a while, I stopped bothering with it.

Comfort & features
I still think a six-figure price tag should guarantee some features. Like a rev counter. Like one key hole that switches the bike on and off and locks the handlebar too. I also thought that the switchgear, which is the same as on other Bullets, seems a bit cheap. I thought the pass-flasher switch and the indicator switch especially felt like they’d collapse under pressure. The riding position is fairly standard, and Joshua says the bike feels good over really long stints.

What would I change?
I’d junk the ammeter for a tacho. I’d use an integrated lock mechanism. I would also junk the entire footpeg assembly and use a simpler, slightly more rearset folding design, straightening and tucking in the kick lever while I was at it. I would also replace the old-hat chrome filler cap with a more modern, hinged jobbie. Slimmer fenders (never mind the extra splashing – the current fender anyway unerringly showers the left boot), still round but LED tail lamp... there’s so much you could do in theory.

Verdict
I know that large swathes of this test are actually negative comments. But I am a road tester, and some left brain activity is inevitable. But in sum, right brain evaluated, although the 500 may not impress in parts, it is quite likeable as a whole. If you’re a mature motorcyclist of a calm disposition, the 500 might just be the wheels you’ve been looking for. It has a graceful lope that you will enjoy, and this time round without oil weeping out here and there too. I, for instance, am so surprised by how much I enjoyed the 500 (really) that I’m about to finish this article and call up REML and ask if they’ve a long termer I could have.

But there is one thing. The Royal Enfield 500 Machismo costs Rs 1,14,000 on-road Mumbai, which is a heck of a lot of money. It does buy you a sweet-natured, long-legged motorcycle that isn’t a tech tour-de-force, a cornering thriller or for that matter, a paragon of economy. Like I’ve told a bunch of people who called after Josh’s article, the 500 is an intensely personal buy. Take one out for a spin, and if you like it, let nothing, this road test included, dissuade you at all. If you like it in the first place, it’s definitely worth it.