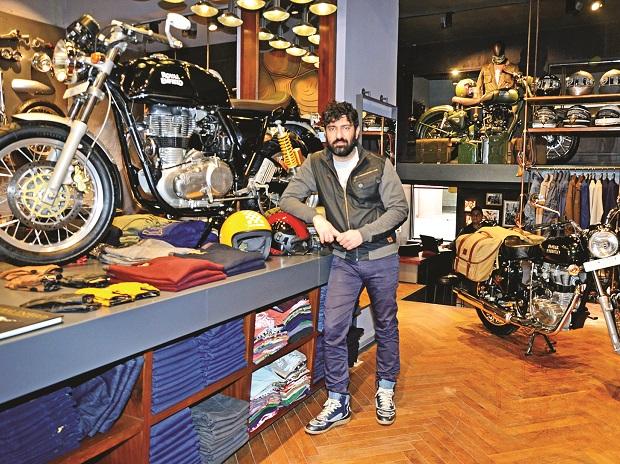 Siddhartha Lal, CEO and MD, Eicher Motors, can be seen standing in a store retailing Royal Enfield motorcycles as well as merchandise, key to its lifestyle positioning

At the recent launch of its limited-edition Classic 500 Pegasus motorcyles, Royal Enfield saw interest among people for not only its new product, but also the accompanying merchandise. The assortment including riding gear and apparels, pointed to an aggressive strategy pursued by the brand. This is that Royal Enfield is a way of life and not just a popular motorcycle brand in India.

By focusing on apparels, protective gear, jackets, shoes, belts and the like, Royal Enfield is now expanding its circle of influence in a bid to improve stickiness. In that, Royal Enfield, made by Eicher Motors, is taking a leaf out of the marketing manual of rivals Harley Davidson and Triumph Motorcycles, who've been pushing branded apparels and accessories for long. 20 per cent of Harley Davidson's overall revenue comes from non-auto segments and Royal Enfield hopes to emulate this.


While officials at Eicher Motors declined to specify sales numbers, there is big scope, say experts, for the branded merchandise  business of the company to grow, given the interest in riding.


“We are a bunch of people who understand the motivation behind motorcycling.  This allows us to sell experience, not just a motorcycle,” says Rudratej Singh, president, Royal Enfield.


“The fundamental ambition is to expand the middle-weight motorcycling experience. It is a lifestyle we are selling,” he says.


The apparel and merchandise business of Royal Enfield has seen a lot of pull from the market in recent years. First launched in 2012 when the Thunderbird 500 was introduced, branded helmets, jackets, T-shirts and trousers are something that bikers have come to expect, Deepesh Rathore, co-founder and director, Emerging Market Automotive Advisors, a market research firm, says.


“Among other things, it is being helped by the differentiated positioning of the bikes,” Rathore says. “While Royal Enfield may not be anywhere close to Harley (in branded apparels/merchandise), it could follow the same trajectory (of growth) in the future,” he says.


So what gives the brand’s merchandise business an edge? Samrat Som, who heads the unit at Eicher Motors, says that besides being  aspirational, accessible and affordable, Royal Enfield’s philosophy of nudging its riders for a life-long pursuit of exploration helps in extensions marking their presence well. While the price of t-shirts range from Rs 900 to Rs 2,000 a piece, jackets start at Rs 5,000, going up to Rs 22,000 a unit ; shoes begin from Rs 2,200, increasing  to Rs 7,000 a pair.


Eicher Motors sources its apparels and merchandise locally as well as from international markets. For categories such as technical jackets, which are not produced in India, the firm imports them from China, Vietnam and Malaysia.


Also, Royal Enfield’s helmet sales, say officials, have  soared on the back of stricter implementation of safety gear legislation in the country. The brand sold 800,000 units of helmets in the year that ended 2017-18 against 240,000 units the year before. The gears (such as gloves, shoes and other protective wear) have also gained traction, they say. With every seven units of motorcycles, Eicher Motors sells one unit of gear today. This is against one piece of gear for every 25 motorcycles it sold six years ago, officials said.


Depending on the usage pattern, the marketing strategy for protective gear is underpinned by the three pillars of “ride, ride more and ride pure”.  ‘Ride’ targets those who are new to the Royal Enfield family, have just graduated from a bike with low cubic capacity and are using it for regular commute.


The whole idea is to push them, Som says, to ‘ride more’ — from regular office commute to breakfast rides, and eventually, multi-day rides. With the increased usage of Royal Enfield motorcycles, the need for apparels and protective gear will also go up, making it easier to press upon the need to buy accessories, Som explains.


“It is logical as well as an evocative way of getting people used to motorcycling to pick up our products,” he says. Differentiated features like a helmet with removable and washable liners, shoes and jackets designed taking into account safety, comfort as well as long-distance rides have also helped, he says.


Besides retailing the apparel and gear through a network of 840 outlets, Royal Enfield has also been selling them through its online store and tapping e-tailers such as Amazon and Flipkart.  It has a tie-up with Future Group’s Central department stores and is looking for more  such associations in the future. “The idea is to have high footfalls as well as high visibility,” says Som. In the cut-throat world of motorcycles, where consumer attention is short, Royal Enfield will have to do  all it takes to stand out.