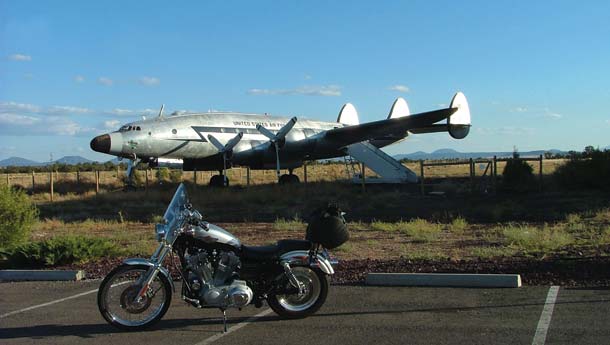 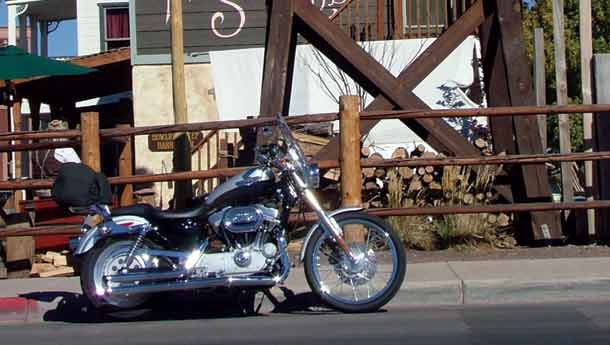 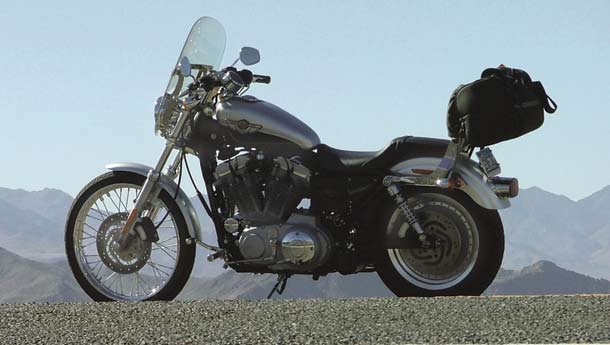 Do you ever get this feeling that everyone knows something that you don’t? Like you missed the big briefing before you were sent down to Earth. I know I do. And while riding back from the Grand Canyon that dark cold night, I would certainly have sworn that I slept through the ‘You don’t do large distances on motorcycles’ bit. At least not on motorcycles with piddly tanks, that is.

Now, when it comes to highways, America probably has the most desolate and yet, the  safest road network.  And with more signs than a nuclear lab, you really have to be incredibly stupid to get yourself into a tight spot. Everything had gone pretty much to plan the entire day. Apart from stopping at about 83 gas stations over my 560 km (350 miles) ride, the Harley-Davidson Sportster 883 Centenary Edition had behaved itself.

The road leading from the Grand Canyon to Williams, Arizona (my night halt) has to be one of the loneliest in North America. The last car that I’d come across was almost 15 miles ago, that too heading the other way. The night was bitterly cold and as dark as going down a mineshaft with your sunglasses on. But that wasn’t the only reason why I had white knuckles. If I were stranded now, rescuers would have reached astronauts in orbit first.

Just then the Sportster started sputtering, and it was already in reserve. This was going to be one long night. My mouth ran dry, my palms began to sweat and my two-day picnic led directly to the most religious experience I’d have all year. The exhaust note that had tingled my spinal fluid for the first minutes on the Hog was now driving me up the wall. Was I scared? Hell no. Petrified.

Then came the second sputter. This time though, the Sportster’s home was on the horizon. No, not Milwaukee, a gas station. I was as relieved as a thirsty bedouin who’d finally found water. But the gas station had one of the biggest signboards I had ever seen. ‘Closed.’ The damn thing was a mirage. But in America you can buy a lemon on a credit card if you really wanted, so I swiped up and declared the pumps open. Now all I had to do was find a place for the night.

Williams is the blink-and-miss-it sort of place and I walked into a bed’n’breakfast called Red Roof Inn. ‘How much for one night?’ ‘Ze room iz fifty dollars, can’t you read,’ blurted the East European at the counter, positively upset at my offer to help his business along.  At which point I left, partly because it was too expensive and partly because I thought his name was Gary. And the ‘r’ was silent.Anyway, a place called Econolodge became my shelter for the night. As I lay in my bed, breathing through my dust-blocked nose, having ridden long enough for the winged H-D badge to make a painful imprint on my bum (what kind of a manufacturer puts a badge on the seat anyway?), I thought of how long the day had been...

Getting up in the wee hours to board a Phoenix-bound flight, having my shoes x-rayed, and my retina scanned (Home of the Brave, eh?) . Landing up at the Harley rental an hour before it opened and then almost falling off the first time I cornered it. Riding with a distant soupy heat haze on the horizon and trying not to fall on slippery roadkill. Keeping out of the rear ends  of wandering SUVs. Stopping next to an air museum for a photo op...

It all seemed to have happened a really long time ago. Except for the Grand Canyon, whose colossal scale is as deeply etched in my mind as the Canyon itself. The first time I looked down from the North Rim, I wasn’t too impressed. It was late, quite foggy and I couldn’t make out how wide or deep it actually was. Honestly, it was like looking out at any of Mahabaleshwar’s valleys through a magnifying glass. I could even hear loud and inappropriate Gujarati chatter.   Not too impressed, I caught the Imax movie. And that’s where the magnitude of the whole thing struck me. To give you an idea of how big it really is, it’s 350 km long, gouged out through three states and 250 storeys deep. It is, ahen, to put it grandly, a symphony of nature and the very summation of grandeur. I could go on, but as the movie puts  it, ‘no picture or word, no brush or pallet, no lens or paint can extend the wonder of the Grand Canyon beyond itself.’

But tomorrow promised a lot. Tomorrow I would finally ride the Route 66. America’s Main Street. The ‘Mother Road’ that promised  real Americana.  It literally put America back on the road to post-war economic recovery. It was freedom for some and adventure for others. An opportunity to head west for a better life. It was the American dream.

The concept came in 1926 – a 3,600 km tarmac ribbon tying eight states together. A decade later, it replaced a crude road network. Finally, a trip across America was no expedition. A few years later Eisenhower got elected and promptly went on a freeway-building spree, the Mother Road was replaced by the superslab. Since then, the Road has been made immortal through songs, books, television and movies, and today 85 per cent remains driveable.

The next day I took the Route 66 exit from the I-40 and arrived at Seligman. It looked like it hadn’t changed since it was bypassed by the Interstate and I decided to stroll around a bit and entered a visitor recreation centre. ‘Sorry we’re open’ said a sign on the window and since shopping was the only recreation on offer, I got back on my bike and continued riding.

The next attraction was some distance away and under the huge sky, amidst acres of nothing, I wondered what it was about this road that attracted so many dreamers. And in some cases, continues to hold them today. The road itself looks exactly as you would see it with your eyes closed. If you listened carefully you could even hear the strum of a guitar in the background. A double yellow stretching to both horizons, mapping the next eight corners. Some stretches so flat, I could almost see tomorrow. Every ten miles or so, I ‘d spot a collection of mailboxes bundled up together with a dirt road turning away into little towns populated by big men with occupations like ‘zombie.’ The Route created those towns and nurtured their growth.

Why anyone would want to live here is beyond me. It’s too hot to do anything and there is nothing to do anyway. Then there were the abandoned gas stations, which in their heydays bathed under buzzing pink neons. The jukebox playing Big Bill Broonzy to a sizzling grill and clunking cutlery score. And people quaffing beer to down greasy hamburgers.

Soon I came upon a huge dinosaur, and before I knew it, I was taking a guided tour of the Grand Canyon Caverns, that lie 210 feet below the ground. ‘The Caverns are 35 million years old,’ said Jerry, the tour guide, who was very entertaining. ‘And it’s always 13 ° Celsius down here,’ he continued. ‘The Caverns were accidentally discovered by Walter Peck, who mistook shining lime rock for gold ore. So he bought 400 acres. Soon he realised his folly, but the enterprising man that Walter was, he instituted an entry charge.’ ‘So what’s with the dinosaur up front?’ I asked. ‘Oh, we just put that up to attract kids,’ he said. Okay, so he wasn’t that funny.   Time to get on with the Route. In the sixties, the Route was losing its importance. But for baby boomers like Bob Waldmire, it is still home. I thought of chatting up Bob about the Route, and went in through the door that had a ‘This ain’t Burger King, you get it my way or you don’t get it at all,’ sign. I asked him why he stuck around, and he gave me an ancestral monologue. But I’ll save you the trouble with this abridged version. Back in the forties, his dad invented the corn dog (a hot-dog deep fried in corn batter) and while the invention may not show up the Wright brothers, it did wonders in the field of driving-while-eating and hence the connection.

Later Bob became an artist, bought the obligatory VW bus and began to travel, drawing and selling his works along the way. Usually, that ‘way’ was Route 66. Eventually, he became the road’s unofficial artist, and a recognised highway historian. Today the bus is covered with a map of Route 66 and is a signboard for Bob’s store. ‘So how many people do the Route now?’ I asked. ‘Well, the baby boomers do, but otherwise we don’t get many people,’ he said leaping into yet another harangue about the sort of customers he got. ‘And what do the guys in these small towns do for fun?’ ‘Well, they check their mail a lot... and, well, that’s about it.’

He didn’t really say that – I ‘m just making that up. Bob, meanwhile, launched into yet another of his escapades. I was running waaaay too late to be paying any attention; somewhere, halfway into the anecdote, I saddled up for what would be one last manic 400-mile ride. Riding back on the featureless expressways, I had time to think about how much fun I was having. None.

And that’s when it struck me. Sure, the Visitor Recreation Centres are expensive T-shirt shops (price of tradition?).  Nor is the Route that  historic, my attic has more antiques. But then that’s not the point. You see, the Interstates are like one-night stands, the Route is the wedding that lasted forever.

For a country like America, where the national sport is eating and kids grow up thinking parking lots sprout shopping carts, the Route is perhaps the place to enjoy the smell of freshly mowed hay, mom-and-pop motels, hamburger stands and neon-lit gas stations with smoke drifting up from the pit barbeque chimneys. For that, the Route is as much a part of this young nation as the Statue of Liberty and as indispensable as the hamburger.

I hadn’t gotten my kicks on Route 66, but then again, it isn’t for everybody. It is not for people who shy away from the old-fashioned and ride rented motorcycles with metal badges on their seats. Yet, there is a spirit that lingers on the blacktop and lives in its people and its structures. What’s more, it was strong enough to penetrate a sceptical journalistic heart.

I reached the rental well past midnight. I opened the padlock to the parking lot, got in, locked the gate and dropped the key through the chute. At my pre-birth briefing, I also seem to have missed the concept of locks that don’t need keys to snap closed. And I locked myself in. Not to worry, all I had to do was climb the eleven-foot gate, and I’d be free. Er... Not quite. I climbed over, only to have a member of Phoenix’s finest accost me. The sergeant was very large and very hot... and certainly not happy. This was going to be one long night.