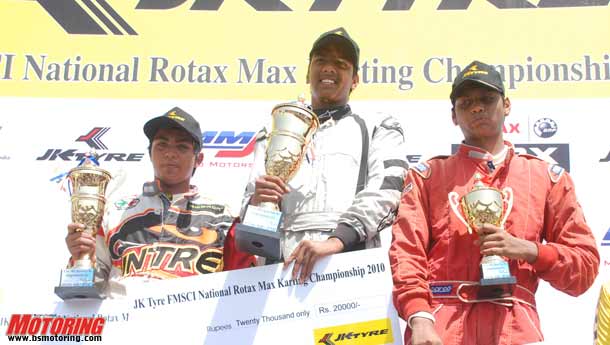 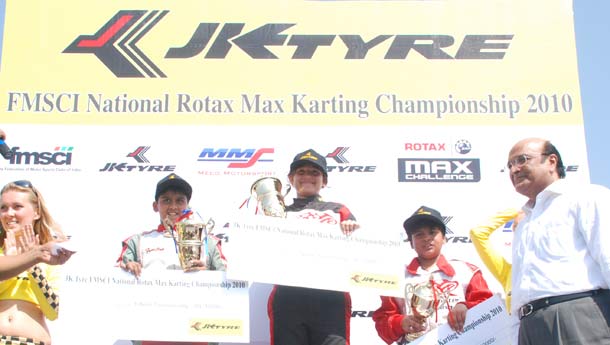 The 7th JK Tyre Indian National Rotax Max Karting Championship got off to a rousing start on a bright and sunny day with its first round of the season at the street circuit at the Balewadi track in Pune today. The maiden round of the current karting season saw over 50 competitors in the fray. For the first time several teams were in the fray for the most prestigious event in the country’s karting scenario. Mohites Racing Team, Red Rooster Racing, Rayo Racing, Meco Racing and Amaron -Meco Pro Racing were amongst those whose teams were seen in action this weekend.


All the three classes witnessed a very tough session as top karters from various corners of the country fought it out for honors on race day of the first round of the J K Tyre Rotax National Karting Championship. With new generations of racers entering the scene the seasoned seniors and former champions were given a run for their money.

And hogging the limelight in the senior’s category with a bit of luck was the seasoned racer Chittesh Mandody from Team Mohite Racing. Giving him tough competition was Parth Ghorpade from Team Amaron and Vishnu Prasad also from Team Amaron who came second and third respectively.

It was a great day for Abha Mankar from Team Red Rooster, the only girl in the junior category, as she commenced the season on a winning note by racing away to her first podium of the season in the junior category and winning the title hands down. Dhruv Mohite from Team Mohites came second and Arjun Maini from Team Red Rooster came third. Abha got off to a good start and ensured that the lead she built was retained till the finish.