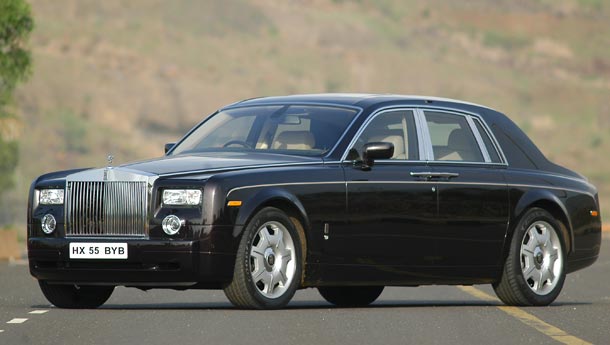 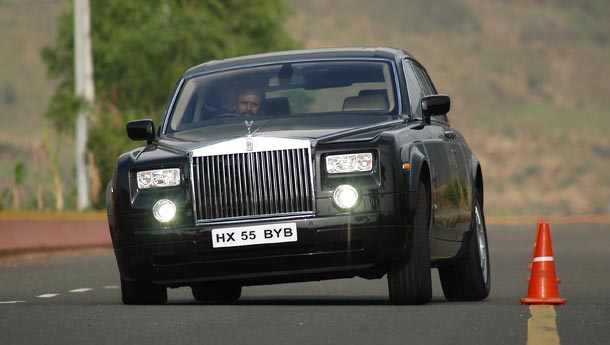 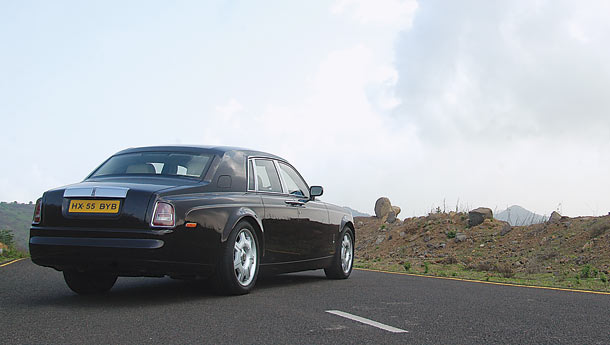 There are certain things a Rolls-Royce Phantom is supposed to do. Like purring down the tarmac at parade speeds, blasting across the continent to keep up with the owner’s Gulfstream, making a grand entry to be welcomed by flashlights and so on. Trust me, the last thing the engineer who signed off this particular Phantom would have had in mind was a motoring journalist slaloming through a set of orange traffic cones.

If you will allow me a modicum of chest thumping, we were qualified to do all of the above since it was not the first Phantom that we were driving. Actually, we have featured close to half a dozen Rolls-Royces in these pages over the last eight years. And we even drove the new Phantom for our sixth anniversary issue. But to test one was a dream come true. Get ready to stretch your imagination.

Eyeful
The Phantom is a big automobile. This, the standard wheelbase version that we tested, is close to six metres long, almost two metres wide and over one and a half metres tall. And it weighs more than three tonnes. Of course it shows. It is the size of a small grocery store in Mumbai minus the colourful  packets of Lays dangling from above. And it is far more impressive. I never liked the square headlamp treatment, but in the sum of things, the Phantom can drop some jaws. Park one on the road and admire it from the front-three quarter for best results.

The design brief given to Ian Cameron, chief designer of Rolls-Royce (what an entry in your CV that makes!), was to create a motorcar that is clearly a Rolls-Royce even when the radiator grille is not in view – and I have to say he has exceeded the brief with the Phantom. Though designed for the new millennium, the Phantom has design cues from almost every great Rolls-Royce in the past – the Parthenon grille, short overhangs at the front, long overhangs at the rear and a well tucked-in rear section.

You will be surprised to know that one of the functions of the rear hinged doors is to form a protective barrier to those entering or leaving the car when both doors are open.   Living room
What a magnificent place to be. Almost like the cocoon of a very large butterfly.  Deep pile carpeting, leather of different grains and space for a handful of very successful people. Attention to detail is the norm here and you can spend hours fiddling with organ stops and violin keys that form the switchgear. The driver faces three crafted black dials of which the power reserve gauge ‘communicates the adequacy of available power’ according to Rolls-Royce literature (as in at 160 kph, the Phantom will inform you that it has 75 per cent of its power capability left!). Adding a dash of

James Bond is the centre panel housing the analogue clock that swivels to reveal a multi-purpose monitor.  Add to these a six-temperature zone climatiser and ambient LED lighting that allows you to set the mood inside the car, and the luxury image is complete.

You will be surprised to know that rear passengers sit taller than the ones at the front – just so that they have an uninterrupted view of the Spirit of Ecstasy mascot guiding their way.

The test
Now we are talking. A 6749cc twelve-cylinder motor built to Rolls-Royce specifications by parent company BMW provides power to the Phantom. And lots of it. It churns out 453 bhp at a leisurely 5350 rpm and enough torque to spin the earth backwards when the car is under full acceleration (72 kgm at 3500 rpm). Now, unlike the Bentley Continental GT, all that torque and power is transmitted to the biggest rear wheels and tyres we have ever come across.
Time to drive. Getting inside and strapping oneself in is not too different from any other luxury car. Changing gears using the electronic lever housed on the steering column takes time getting used to – but it is not difficult. Release the hand brake electronically, slot the gear lever into D and bingo, the Phantom starts rolling with the eerie feeling that’s usually associated with telekinesis. Immediately you know that you are driving something supernatural or highly evolved. The car literally, and I am not exaggerating here, glides on the road. It is very close to being in a boat on perfectly still water.

But our job was to test it, right? So naturally we ran a 0-100 kph run and managed to stop the clock at six seconds. But of course we were running air-conditioning. The top speed of the car has been limited to 240 kph, but we eased off at an easily achieved 180 kph. Then on to our PET track, which is made up of a standing start run with a lane change manoeuvre, one zero stop, a slalom run with a 60 kph entry speed, a skid-pad turn and a flying finish. Flooring it with the silliest grin I could muster, I saw 160 kph before the lane change and the car managed a stunning 13 second split time to reach the zero. Massive 374 mm discs at the front and 370 mm discs at the rear haul the car to a perfect stop without moving an inch away from the intended line. The trickiest bit was to start rolling again and attempt a U-turn to face the slalom course. Mind you, 75 per cent of the 72 kgm of torque is available from 1000 rpm onwards and trying to corner the Phantom under heavy acceleration is like trying to veer a locomotive off its track using an imaginary steering. Once that was achieved, the Phantom needed to be slowed down to 60 kph to enter our slalom run. We had to play this extremely carefully since the car was way too long and there was simply too much torque being produced by the motor. Sense prevailed and we kept speeds under check, which resulted in the 54 second ‘best’ time we posted for the PET.   No, despite our best efforts, the motorcar refused to get out of line at any given point of time. We could have kept on doing this till the end of the day, but then there was a mountain road to be tamed. Before you demand to know the fuel efficiency, let me tell you that you do not need a captive oil rig to run this machine, since it returns 8-9 kpl when driven carefully. Of course, we would have been averaging close to 6 kpl during our test runs.

You will be surprised to know that Rolls-Royce never used to publish power output figures of their cars. At the most, the literature rated it as ‘adequate’! BMW had no option but to change tradition with the Phantom.

Carving
You do not expect elephants to swim across rivers, but they do. Similarly, you do not expect a massive Rolls-Royce to go apex hunting – but it can, and will, if you insist. I really don’t know whether it was the thin rimmed, ‘zero-effort’ steering wheel or the double wishbone front suspension that was doing the magic but driving this Rolls-Royce fast around bends was simply a divine experience. To begin with, there is no lack of power at any given point of time, but even when the twelve-cylinder engine is kept busy, there is near silence in the cabin. And the car reacts to steering  inputs, however violent they may be, like a glider riding a thermal. It is so fluid on the turn that you end up carrying too much speed into corners – fine, as long as fellow road users don’t get startled by the sight of a 22-slot grille spread across the road.

You will be surprised to know that the Phantom has a dual-note exhaust which shuts a valve in the system to increase back pressure at low speeds and thereby reduces the exhaust note to a hush. Perfect to receive a guard of honour.

Verdict
I have driven the Maybach 62, the Bentley Continental GT and Flying Spur and have now tested the Rolls-Royce Phantom. On each of these occasions, I came back realising that I am not qualified enough to make even a passing judgement. These are automobiles made to a certain standard and not to a budget. So naturally there is no room for any fault finding here. But if you insist, I can tell you that the Phantom has more presence and is better value than the competition, as long as you do not mind the image that comes with the package. You see, this is one automobile that you have to live up to.