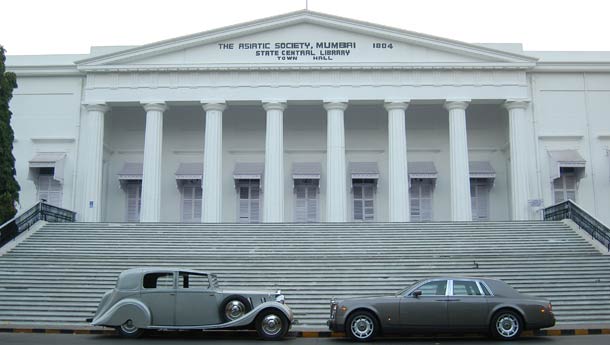 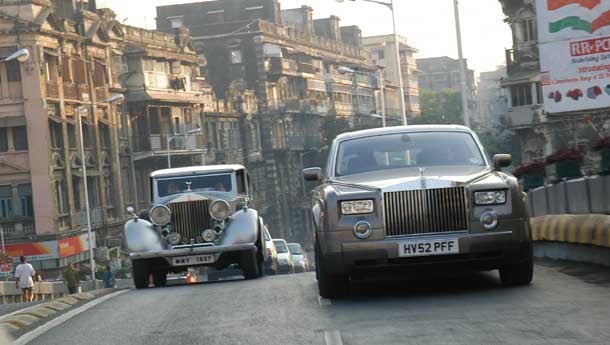 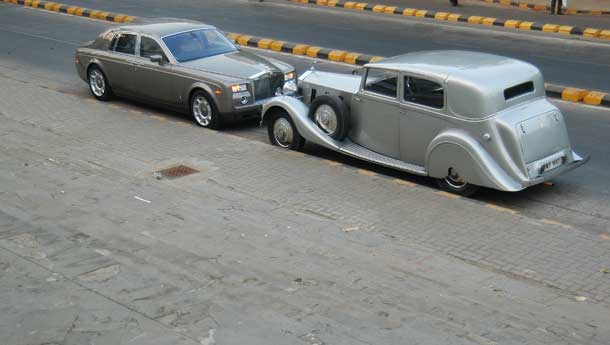 Pinch yourselves. Try to take it all in. What you see in the opening picture is history being made. It is the first time a 12-cylinder Phantom III from 1937 has been summoned to meet a 2004 Phantom. Two Rolls-Royces separated by 64 years, a World War and a Cold War. As you can imagine, we are a bit proud about it all. Actually, we are over the moon and heading towards Proxima Centauri. No PR agency, no magazine, no television crew and not even BMW, who build the new Phantom, thought of this significant reunion. We dreamt of it for two months and tried our best to make it happen. Why? Boy, do we have to explain?


These automobiles are extremely special. The 1937 Phantom III was the first ever 12-cylinder Rolls-Royce and it was the first car to roll out of the Crewe factory after the death of Henry Royce (Charles Rolls had met his maker 23 years before that). The 2004 Phantom is the first car to bear the RR crest and the ‘Spirit of Ecstasy’ mascot after the factory was sold to Volkswagen. Royce had overseen the work on the Phantom III and ensured that the car he would never live to see brought the ‘best motorcar in the world’ title back to Rolls-Royce. BMW, who build the new Phantom in a small factory in Goodwood, UK, want their car to be the ‘best in the world’ too. The 1937 Phantom III was born because of some fantastic competition from Daimler, Cadillac, Lincoln and Packard who were building magnificent 12-cylinder luxury cars. The 2004 Phantom was built to take on not just the finest from Mercedes-Benz and BMW, but the ‘ultimate’ automobile that wore the re-born Maybach badge.

Now, allow me a mild bout of chest thumping. I have driven the new Maybach and now the new Phantom. And the Mercedes S-Class, the Audi A8 and the BMW 7 Series. Now that it’s off my chest, let me tell you it wouldn’t be prudent of me to say one is better than the other – because I am not the crown prince of Saudi Arabia, and even if someone made me one today, I think I would want a Porsche 911 to play with. You get the idea; I am not qualified to pronounce a winner here. Before the question pops up from you, let me say that we wanted to bring the new Maybach and the new Phantom together for a story – but then things went wrong the only way things can go wrong when something so magnificent is about to happen. The only Maybach we could have driven met with a minor mishap and DaimlerChrysler India couldn’t get it ready for our shootout. But even when we planned to bring the two Phantoms together, we had swallowed our share of butterflies. You, see anything could have gone wrong – it is not every day that a 1937 Phantom is woken up to run on Mumbai roads. We could have been stopped by cops simply because the 2004 Phantom doing PR duty in India wore British numberplates. The old Phantom could have refused to start, the new Phantom would have ended up in a customs warehouse... the list goes on.   Well, everything went right. We sampled the very best automobile from the vintage era and its namesake from the new millennium. Before we compare the driving experience, let us take a closer look at these monstrous machines. Fourteen slats on the mighty grille greet you in the ’37 Phantom, while the ’04 edition has 22 slats! The elder Phantom has big round, dinner-plate headlamps while the new Phantom, designed by a team led by Ian Cameron, features rather characterless rectangular units – it is in fact the most criticised bit in the new Rolls-Royce. In stark contrast to the headlamps, the new car has round auxiliary driving lamps which pay homage to the original. Now part of the Pranlal Bhogilal collection, the 1937 Phantom III was first ordered by the Maharani of Nabha, Punjab, and it came with a Hooper-built custom ‘sedanca-de-ville’ body that automatically separated the chauffeur from the royalty. A total of 710 Phantom IIIs were built, most of them got fabulous bodywork from various coachbuilders and almost every car differed from another. The new Phantom had to be designed with a certain degree of crash-worthiness in mind, so coachbuilt bodies, as you can imagine, were not so viable. Thus, the 800-odd Rolls-Royce Phantoms that the company sold last year alone wore the same clothing – aluminium panels and aluminium spaceframe bodywork created at BMW’s Dingolfing plant in Germany and carefully bubble-wrapped across to the sub-terranean facility at Goodwood. The ’37 wins when it comes to exclusivity – but we hear that some of the new Phantom customers wouldn’t mind a bit of customising. 50 Cent, from today’s bling-bling set, wants a convertible at any cost!

The new Roller is leagues ahead when it comes to interior appointments, but the older automobile has the last laugh when it comes to rear legroom. The interior of the new car could have belonged only to a Rolls-Royce. The finest figured mahogany (or a choice from any rain forest), hide (18 mammals would need to shed their hide to make up one car interior) and carpeting (lamb wool) means not even a Maybach can match it when it comes to opulence. Instead of the rear sofa seat,

P Diddy and company can order individual business-class type seats too. The ’37 Phantom has two seats for attendants to sit and massage the legs of the Maharani (beat that!) and a sofa that can bury you deep inside the massive C-pillars, away from the prying eyes of enemies and jealous citizens. What ‘Pushpak’ (as the older car is nicknamed) cannot boast of is airconditioning, sat-nav, voice activation and a Lexicon music system comprising nine amplifiers and 15 speakers. On the other hand, one of the attendant’s seats in the older car could always have been occupied by a live singer!

Ah, the engines! Both feature magnificent twelve-cylinder units, with the older engine derived from an aircraft motor. It displaces 7338cc and developed close to 165 bhp. It was the smoothest and most lovingly finished engine of its era and could haul the near two-and-a-half ton Phantom to 160 kph – incredible for its time. The Phantom III you see here is even rarer, since from 1938 onwards Rolls-Royce started fitting fixed tappets in place of pushrod-operated overhead valves with hydraulic tappets. The solid tappet ensured that there was no gumming, but new age lubes ensure that Pushpak runs without any trouble even with its hydraulic tappets. Driving the Phantom III is a divine experience. It is smooth, silent and makes you wonder whether the innards of its engine are made of wax. Floor the small accelerator pedal, in any gear, and the experience is not dissimilar to being in a royal chair car of the ‘Palace on Wheels’, complete with the surge provided by a locomotive somewhere far ahead of you.   The new Phantom is ultra modern, since it borrows heavily, and rightly, from the new BMW 7 Series. The 6750cc twelve features direct-injection, 48 valves and is mated to a six-speed automatic transmission. Ditto the 7 Series. Rolls-Royce never believed in revealing the power and torque figures in the days of the Phantom III (‘adequate’, it would say in paperwork), but  the new Phantom, we are told, is good enough for 453 bhp at 5350 rpm, with almost all of its 72.4 kgm of torque pulling away from as low as 1000 revs. Unlike the older car, you thumb the twelve to life and I loved the idea. Inside the cabin, you cannot hear that hardworking valve-train as you accelerate to 100 kph in under six seconds. The view from the driving seat is commanding. It had better be, with a bonnet line resembling the bow of the Titanic with a small ‘Spirit of Ecstasy’ doing a Kate Winslet way ahead. I did not drive the new car much, but I drove it enough to tell you it is an altogether different beast than the 7 Series. As your right foot sinks into the carpet, the bow of the car rises and then it majestically wafts you to blissful speeds. You can be reassured that every possible automotive technology prevailing today, including Dynamic Stability Control (DSC), is there to assist your progress. But driving these machines back to back was also made special by some deja vu touches in the new machine. The thin steering wheel of the new car, which is not unlike the one in the Phantom III, and the thumb operated switches inspired by musical instruments are but a few examples.

What I do remember well is that the Phantom III rode as well as the new Phantom. The vintage car featured independent front suspension, which was new even for Rolls-Royce back then. The new Phantom gets a self leveling air suspension and adaptive dampers – but the ride, in both cars, is akin to being on a magic carpet (not that I’ve been on one, but you get the idea).

A total of 19 Phantom IIIs came to India, most of them bought by royalty. King Carol of Romania, King Farouk of Egypt, King Ibn Saud of Saudi Arabia and the Shah of Iran all owned Phantom IIIs. It was indeed the automobile meant for kings, queens and the occasional benevolent dictator. Of course, names such as DMX, Black Eyed Peas, Eminem and P Diddy do not quite belong in the same league, but times have changed, the motorcar has changed and so has the clientele for Rolls-Royce. There are times, the natives say, when the Phantom leaves the jungle and walks the streets of the town as an ordinary man.