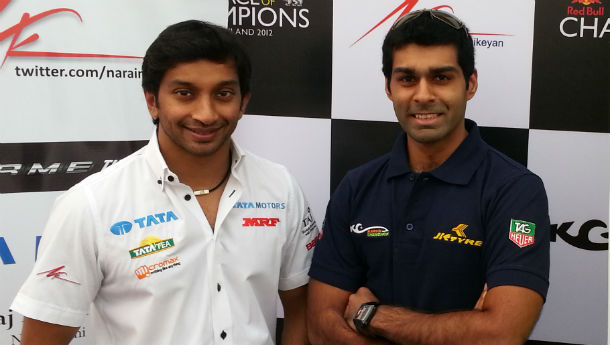 Other big names in the 2012 edition of the ROC are Michael Schumacher, Sebastian Vettel, Jorge Lorenzo, Mick Doohan and more.

F1 driver Narain Karthikeyan, who drives for HRT this year, was excited to be part of this event and even happier to represent India at the ROC. He commented, “It’s really cool to receive an invitation to participate in the Race of Champions. What a fantastic honour it is as well. The competition is the strongest in the world, with only the best of the best from many different forms of motor sport all competing against each other. The added benefit of representing your country is a real privilege, and one which I have done before in my career, so I know how special that feels. Karun and I are definitely going to enjoy ourselves, racing against our peers in some pretty cool machinery, but we will also be gunning for victory, and with a bit of luck, we will bring glory to our nation.”

World Endurance Championship driver Karun Chandhok, who drove for HRT in 2010 , Lotus in 2011 and JRM Racing this year, is glad to see Indian motorsport getting more recognized on a global level. He said, “I'm very excited about going to the Race of Champions this year! It's fantastic that the organisers have decided to have an Indian team and Narain and I had the dates free to do it. The event looks like a lot of fun while obviously being very competitive. The concept of ROC Asia is very interesting - we have seen in the last 10 years how motor sport has been shifting to this end of the world more and more and it's great that Fredrik and his team at ROC have embraced this. Narain and I haven't been in the same team since 2004 when neither of us was an F1 driver. A lot has changed in life since then and it should be a lot of fun to work together again. ROC has always attracted some of the biggest names in world motor sport including Sebastian Vettel, Michael Schumacher and Mick Doohan and it will be nice to spend time with all these guys as well.”

Fredrik Johnsson, Race Organiser, ROC, is convinced Team India will be a force to reckon with and added, “We have been looking forward to ROC Asia ever since we knew we were coming to Bangkok this year – and the line-up has lived up to our expectations. With the might of China and India in the mix, we hope to see plenty of new motor sport fans cheering on their heroes at the Race of Champions. Narain and Karun are a formidable pairing for Team India and will certainly be a threat.”