The Mahindra & Mahindra (M&M) stock gained over 1 per cent on Thursday, even as other auto stocks closed in the red. The company has multiple factors going in favour, such as improving tractor sales, volume uptick in its rural-focused portfolio, and upsides from the new joint venture (JV) with Ford.

Key near-term gains, however, are expected to come from its farm segment. Tractors volumes were better than expected in a seasonally strong month, posting an improvement as compared to the last few months.

Analysts at ICICI Direct Research believe M&M’s performance stood out among the auto pack on all fronts. While automotive volumes fell 21.2 per cent year-on-year (YoY), they registered a healthy 20 per cent month-on-month increase on the back of a 39 per cent rise in three-wheelers, and an 18 per cent rise in the four-wheeler portfolio.

While heavy rains caused some disruption in tractor sales, the firm indicated that a good monsoon overall, reservoir levels, and crop prices were the positives, going into the festival season. Analysts at Nirmal Bang Institutional Equities, too, believe that a good monsoon augurs well for a strong Kharif output, and prepares the ground for a bumper Rabi crop. This should bode well for tractors sales. 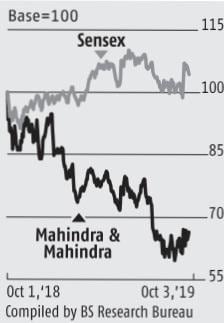 The share of tractors in M&M’s overall volumes has been rising; it accounted for 46 per cent in September. Given that margins for the tractor business are more than twice that for the automotive segment, rising volumes should help improve margins at the consolidated level.


Analysts believe the recently announced JV will help M&M. This is because the cost of its comparative capacity is expected to be much more than M&M’s share in the JV’s enterprise value, which stands at Rs 960 crore.


The combined scale of operations for M&M and Ford’s India operations will help achieve economies of scale, reducing sourcing costs. Finally, the partnership is expected to help M&M increase its presence in overseas markets and leverage upon Ford’s distribution strength.


While the company is facing competitive pressure, analysts expect it to maintain its share at current levels. Further, the valuation of 10x its FY21 earnings per share, excluding the value of its subsidiaries, is attractive.