Even as headline numbers show car sales have halved from the same time last year, signs of recovery in rural India have come as a glimmer of hope for the financially stressed auto industry.

Maruti Suzuki India, the country’s largest carmaker, on Wednesday reported a 53.8 per cent year-on-year decline in domestic passenger vehicle sales to 51,274 units in June due to Covid-19 related disruptions.

“The sales performance during June and the entire first quarter of this fiscal should be seen in the context of the ongoing Covid-19 pandemic, lockdowns and restrictions required for safety,” the company said.

The carmaker, however, more than doubled its sales from what it sold during a fortnight of May. Sales in dealerships could resume only after May 15 due to one of the longest lockdown globally to control the pandemic.

Sales also showed encouraging signs for the country’s largest two-wheeler maker Hero MotoCorp. While it saw a 26 per cent dip in its June sales compared to the previous year, the figures quadrupled from the previous month.

The company, which manufactures two-wheelers and scooters, said a major part of its market demand emanated from rural and semi-urban markets. The company said it had made significant progress in ramping up production across all eight manufacturing facilities.

Analysts said the demand recovery in two-wheeler and car segments was skewed towards the semi-urban and rural markets. That has come as a surprise, said Motilal Oswal Securities. Commercial vehicles, on the other hand, have seen minimal demand due to excess capacity, low economic activity and financiers turning cautious, as many fleet operators have already opted for moratorium. 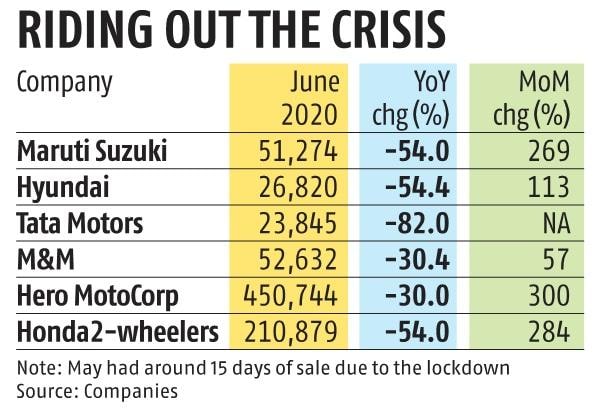 Against this, the tractor segment's performance has been relatively better.


It was evident in Mahindra & Mahindra’s sales of farm equipment. The company, which is the largest seller of tractor in the country, reported 12 per cent year on year (YoY) growth in domestic tractor sales at 35,844 units in June 2020 against 31,879 same period last year. This is the second highest June sales ever, the company said. “The timely arrival of the south west monsoon, combined benefits of a record Rabi crop, government support for agri initiatives and very good progress in kharif sowing have led to positive sentiments among farmers,” said Hemant Sikka, president-farm equipment sector in the company. He expects demand to remain buoyant in the coming months.


Attractive financing schemes and expectation of normal monsoon could support automobile companies to build on the demand recovery and post improved sales figures on a monthly basis, believe analysts.


“Our thesis of rural sales doing better than urban and tractors and two-wheelers outperforming the broad auto sector is likely to play out. Dealer interactions indicate that retail sales have largely come back to pre-Covid-19 levels for tractors, around 80-90 per cent for two-wheelers and 60 per cent for passenger vehicles,” wrote Kapil Singh and Siddhartha Bera, research analysts at the brokerage in their sales expectations report.