Rider of the lost arc - Touring Cambodia on a motorcycle 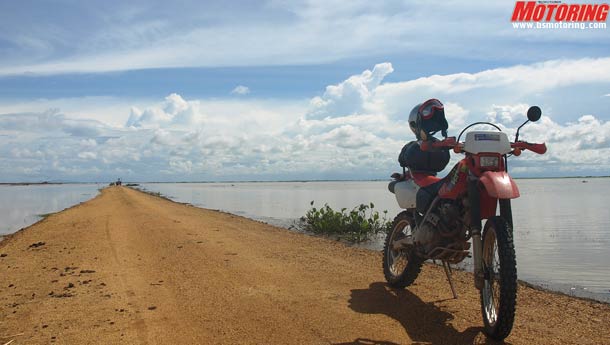 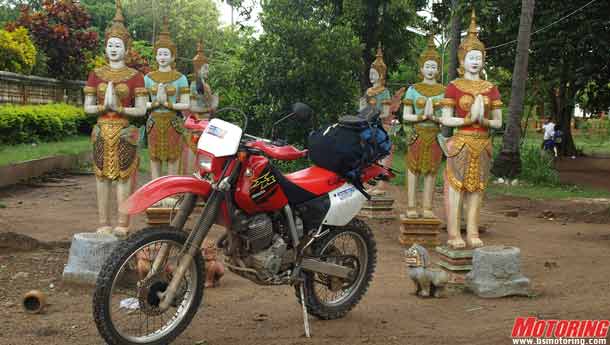 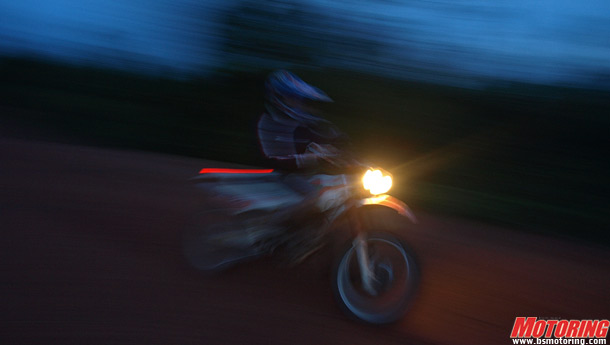 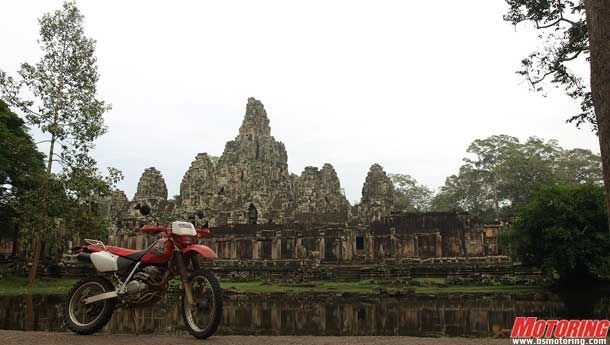 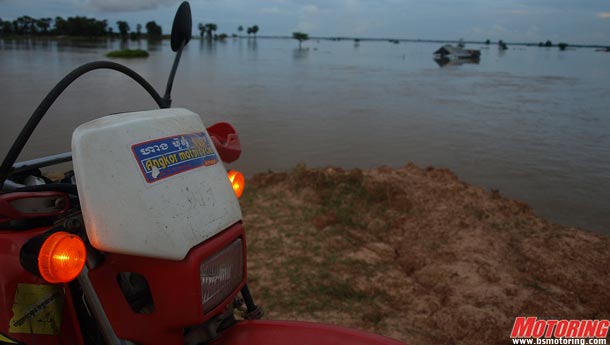 It’s been two hours on the busy highway 6 and it’s almost mid-day. Small wooden huts that line each side of the highway peddle all kinds of paraphernalia - fruit, vegetables and cooked food as well. Good option for a quick bite to calm the pangs in my stomach, I thought, as I pulled over near one such hut and got my English to Khmer phrase book out. 'What do you have to eat?' I ask as indicated in the book, only to be greeted with a wide smile and some giggles. I look around before I find mounds of bananas sitting in a bamboo basket in the corner. I proceed to point out to the bananas, indicating I’d like two. The young lady and her husband look at each other and laugh uproariously before trying to hand me two stems-full. I gesture that I want only two, to which they shake their head in disagreement.  Okay, so I’ll settle for what appears to be freshly fried banana fritters (which I usually hate) for the moment.  500 reil (about 10 cents US) for a pile of six big fritters is a bargain. I settle down besides my motorcycle and hungrily bite into them.  Rather crunchy for bananas, but I dismiss it as the Cambodian style of doing things. The taste is masked by the batter, but it’s not bad. I glance at one, only to realise my so-called banana fritter has a little black hairy prong sticking out of it. Detailed investigation reveals that banana fritters on Cambodia’s menu cards equals batter fried Tarantula. I stare at my fritter in disbelief, as the locals fall about laughing. Funny - very funny.

The ride to Siem Reap, a 311 km journey, was a touch under four hours including a brief food stop and doing the thing I usually do, run out of gas. Highway 6, which connects Phnom-Penh to Siem Reap, is a single-carriageway black-top that is the centre of all activity for villages that dot the sides of this road. It is also the village market, local playground, grazing fields and every Cambodian’s dream of an expressway. So while I’m trying to make good time to Siem Reap, dodging cattle, kids and the pedestrians sauntering across, I get buzzed by speeding Chrysler 300Cs and Bentleys. Nothing different from the riding conditions I’m used to back home, except this is in fast forward as the Honda XR250 I’m straddling is maxed out at about 104 kph and the knobby’s are really starting to show how much they hate tarmac.

Siem Reap is one of Asia’s top tourist destinations, given its proximity to Angkor Wat and the city of ruins. Yet as you enter the place, there’s a sense of decay. It’s very evident as you go looking for a place to stay; the old part of town, which is where you want to be to soak up the atmosphere and get a feel of the local life, is in dire need of attention. The past day's rains had the river overflowing, but it had long since receded, although people were still wading through sewage water in the streets to get home.  It’s not rare to hear stories of how the government is steadily allowing the place to go to pot, and I don’t mean Pol Pot (couldn’t help the pun). After a good deal of looking around, I pulled up at the European guest house and, as luck would have it, was greeted by Henrik, a dirt-bike nutter, who along with his Khmer wife ran the place. We sat down and exchanged stories over a beer and before I knew it, Henrik pulled his Honda Baja out of the shed and was planning a ride for the next day. His father-in-law is in the military and we could access a few trails that are usually out of bounds to motorcycles. Perfect, eh?

I was up early and off to putter around the city of ruins before the afternoon ride. Angkor is a big, big place to see and it takes anywhere between two hours to two days to go through it, depending on your level of interest and the temples you want to see. Angkor Wat in all its grandeur is simply phenomenal when you see it in the flesh, er... stone. What strikes you the most is how humans so far back in time were able to create something so enormous and so stunning with such attention to detail.

So while most of the tourist flocked to the main Angkor Wat site, I was off quickly to discover the surrounding temples of Ta Keo, Bayon, Preah Khan and the most visually appealing of all, Ta Prom. Ta Prom was made famous by the Tomb Raider movie and although it’s still in ruins, restoration work seems to be starting at this site too. The convenience of having your own motorcycle inside Angkor city is the fact that you can go down off-shoot paths and discover everyday life in small villages, and around the little lakes in this ancient Khmer land nestled deep in the forests. Most of these trails have been cleared of land mines and like every small road in Cambodia, they too will eventually lead to a main road or highway, so let the explorer in you run wild.

With the Angkor Wat done, I was back at the guest house to re-fuel and head out with Henrik, who by now had a couple of other friends in on the ride too. So with two Honda XR250s and two Honda Baja 250s, Henrik led the way to Phnom Bok. Having lived here for a few years, he knows all the back roads and we were soon slipping and sliding down some terrific mud roads and dusty trails. It was four in the evening and rain clouds had set in, but they weren’t going to stop me, or the nutter in Henrik. We were on a mission. About forty kays later we pulled up at a little check post at the bottom of a hill. Henrik talks to the army guard in Khmer before he lets us though. We were told to stay on the trail because the hill side hadn’t been completely de-mined. It’s not the mines in the ground that are a cause for concern, we’re told, it’s the hanging mines that we don’t want to encounter. The difference is losing a leg or the entire torso. Dominic, who doesn’t usually ride motorcycles, decides that he’s going to take the 600-odd stairs to the top, while Henrik, Floyd and myself had a go at the path.

The path was nothing more than big rocks and roots of over grown trees covered in mud. Deep ruts and fallen trees are also at hand to make sure that nothing comes easy. The 250, though, is more than a handful on this kind of terrain, as it’s more of an adventure motorcycle than a dirt bike and its weight really works against it. Thirty minutes later, we’ve conquered Phnom Bok to find the most breathtaking view of Siem Reap and Angkor city as well as operational artillery used by the Khmer Rouge. Temples mystically appeared as silhouettes through the trees or as reflection in pools of water surrounding them as streaks of moonlight crept through the trees. I try and imagine what it must have been like to live here a few thousand years ago as an air of eeriness creeps under my skin. I wring the throttle and ride towards town as fast as I can.

I left Siem Reap in the pouring rain armed with a 50 cent raincoat and some garbage bags to keep my luggage dry. I can’t really say that it rains in Cambodia; it’s more like the gods decided to press the flush button, but the raincoat held up for a bit and soon the rain was gone too. I did manage to visit a few Wats along the way, found an abandoned meditation cave and realised that it was about time I get to a town because the rain clouds looked a lot more menacing than this morning.

I had to soon seek refuge in a small wooden shack along the highway as the rain came flushing down. Three rather intimidating blokes who were sipping on the local brew welcomed me in. It was my natural instinct to think they were going to whip out machetes and kill me, but they were actually just trying to make sure I stayed dry, only in a very physical manner. The gushing rain refused to relent and an hour later I realized I was going to have to move from the shack to their stilted house before the water got too high. My motorcycle was parked relatively safely under the house and as darkness fell I would soon realise that it was half submerged. As for me, I was dry, safe and sitting in the darkness eating some piping hot rice and soup, the contents of which I didn’t examine. For lack of bravery or language skills, I’m still not sure. Dessert was in the form of a pipe carved out of bamboo that contained a certain <I>leafy<I> substance. I politely refused with hand actions and lay myself in the corner to nurse the deep gash in my hip that I’d got from an off earlier. Pain, darkness and the sound of the falling rain amidst Khmer laughter is what I’d eventually fall asleep to.

As day broke the rain had stopped, but the water hadn’t receded. I decided to get closer to the city today, if not all the way. I didn’t want to risk missing my flight and over shooting the return time of the motorcycle. There’s one reassuring thing about riding a Honda and that’s having the confidence that it won’t fail on you when you need it. I engaged the choke, cranked the XR to life, and warmed it up a bit before I set out through the deluge. The highway wasn’t as flooded as I expected it to be, but an hour later a few locals told me that highway 6 had been closed ahead and I wouldn’t be able to pass. Here’s where a road map comes handy, and I managed to find an alternative route on the other side of the Tonle Sap river to get in to Phnom-Penh. The 16 km dirt stretch was without much of a hitch but the last kilometer came as a total surprise. Arriving at the bridge pictured on the map that should have spanned the Tonle Sap river, I quickly realised it didn’t really go all the way across – a slight miscalculation that sent me into a major panic attack. It was four hours until my flight and I had the daunting task of finishing the bridge over this mud-ridden river.

I stared at my map and the unfinished bridge in awe. A lady selling dried fish by the side of the road observed these events of my life unfold and the fact that I was attempting to cross the unfinished bridge. She decided it was best she intervened before I did something Evil-Knievel-ish. Calmly walking up to me with a smug smile plastered to her face, she points to a ferry below and in her best American accent says ‘Route  51 go Phnom-Penh.’

Joshua is going touring on a motorcycle in Cambodia again. If you're keen, you can hop along for the ride. More details available on www.indimotard.com or call 91-9980829440.