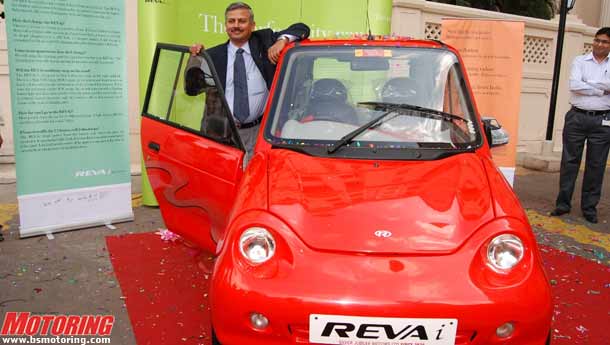 While Mahindra & Mahindra(M&M) is in no mood to bring in the Reva-I to Gujarat anytime soon, the car is already available in the used car market in Ahmedabad.

Pawan Goenka, president, automotive and farm equipment sectors, M&M had indicated Business Standard earlier that the company did not have any immediate plans to sell the car in Gujarat now, as there were no specific state government incentives. Meanwhile, the Mahindra Reva-I is available in the used car market in the city for around Rs 1.4 lakh to 2.7 lakh, depending on the make and the condition. S Waghnani, a Navrangpura based used car dealer said that regular enquiries would come in for the electric car which is very economical to operate. "The Reva-I runs around 70-80 kilometers for a single charge, and that is sufficient for intra-city travel. With fuel prices going up on regular intervals, people are increasingly getting interested in alternate fuel vehicles or even electric cars," he explained.

According to market estimates, while around 10-12 queries come in for the car per month, around 2-3 sell right now. Interestingly, the Reva-I was recently launched in Pune priced at Rs 3.1 lakh, and currently the car is priced around Rs 2.7-2.8 lakh in the Delhi and Bangalore markets, where the vehicle is backed by state government subsidies. The Delhi government offers a subsidy of 29.5 per cent on the electric vehicle. Commenting on the reason behind the high value the car is fetching in the used car market, Waghnani said, "The car runs on a battery which is replaced every three years and costs around Rs 50,000. Those used cars which have recently replaced their battery kits, are coming in for a high price, as the car is almost as good as new then. Others are slightly cheaper at around Rs 1.4 to 1.6 lakh. Moreover, as the car is not available yet in the Gujarat market, the used car market is enjoying a slight premium." Meanwhile, M&M which picked up a 55.2 per cent stake in Reva earlier this year, and formed a new outfit called the Mahindra Reva Electric Vehicle Company, plans to launch a four-seater car from the Reva stable, the Reva NXR, in 2011. The company is also planning to sell around 2,500 cars by the end of 2011. Mahindra Reva's new plant in Bangalore,which is scheduled to come online next April, has capacity to produce 30,000 units per year.