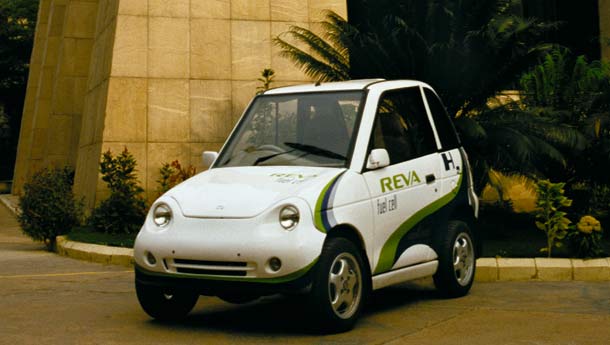 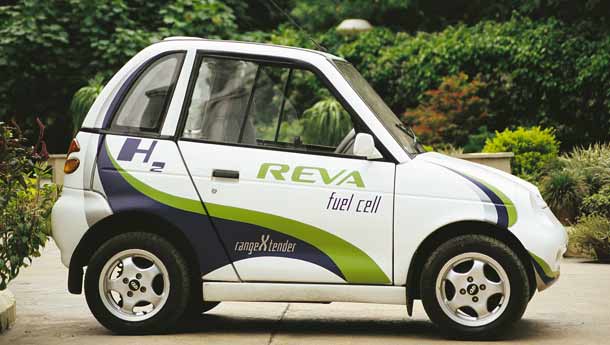 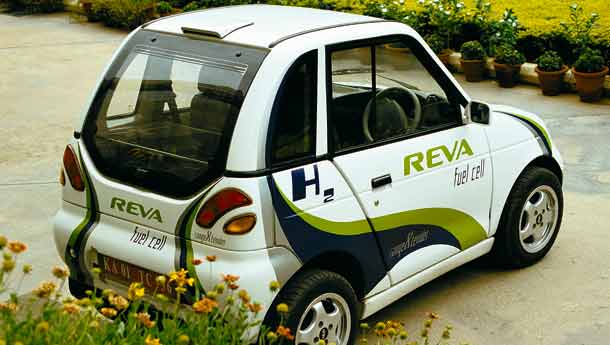 This is the future. And I’m in it today. Guess I’ll just have to forget the familiar symphony that valves, pistons, cams and various other mechanical bits produce while they greasily sweat it out to produce bhp and kgm. Welcome to the world of keep-your-cool gHz, where processing power and zero-emissions is the name of the game, and output figures somehow sound more appropriate in kW.

What am I talking about? Exactly this – a car, which, at full chat, sounds like the little fan in my desktop computer. The Reva Fuel Cell Prototype, India’s first such machine, is initially a bit unnerving to drive, but it soon grew on me. Like its battery-powered siblings, the Reva Fuel Cell is quite loveable actually – only, it’s got a lot more technology packaged inside its little body.

Getting to drive the car in Delhi, I found it’s incredibly easy, and fun too! Turn the key, give in to the experience as the cooling fans start to hum, step on the ultra-soft accelerator pedal and the little car takes off nonchalantly. The thoughtfully placed gear knob – similar to the battery-powered Reva, features a Reverse, a Neutral, and Economy and Fast modes. And don’t laugh at this little machine – ‘Fast’ gets the Reva FC sizzling from 0 to 60 kph in a mere 6 seconds! No surprise that one Mr Bhatia, who came to inspect the car while I took pictures, remarked with visibly annoyance, ‘I’ve seen a few of these before, there is a red one near my place, the woman who drives it has Formula One ambitions. She overtakes my Accent repeatedly…’   At less than 40 paise per kilometre, the Reva electric car is also more economical then most scooters. Not to mention that the FC packs in most of all the goodies of its battery powered sibling. It come with tubeless tires, ‘automatic’ transmission, an AM/FM cassette stereo, a full-blown heating/airconditioning system, remote central locking with security, and best of all, funky decals that make the car so much more of a head turner than it already is. The downside, and agreeably so, is that the Reva comes with an electronic speed controller that limits the top speed to 65 kph. A concern for those commuting long distances regularly is that with the range extender fuel cell, the Reva FC manages about 120 km in one charge. But again it’s only a prototype, and at least a couple years away from getting to the factory floor.

So then, what’s a fuel cell? A fuel cell is, well, a cell that charges itself as you go using it, as long as the fuel lasts. And how does it work? Hydrogen-based fuel cells use, uhmm… hydrogen as fuel (in high pressure cylinders) putting it through a plastic film called the Proton Exchange Membrane (PEM) to produce hydrogen protons. This, combined with oxygen pulled in from the air, generates electricity and pure water. So what’s the big deal anyway? This – to start with, pure water is the only emission, making fuel cells the greenest technology to power your car, and in the future, perhaps your homes and workspaces. Add to that the fact that fuel cells are about 3 times more energy efficient than your internal combustion engine. Simply said, once the infrastructure for distributing hydrogen is put in place, it’ll mean many more kilometres for you for that rupee.

But with all this cool-and-quiet talk, don’t allow yourself to think you’ll pass by unnoticed in a Reva FC. Every single passing car slows down to let its occupants take a good look.   One over-enthu Punjabi kid in his black Lancer overtook and stopped in front to quiz me on the car. The security guard in my apartment block didn’t open the gate until he’d come out and taken a good look at the car, and then with a smile and ‘Saab, yeh badhiya hai!’, let me in. The people from Maini Auto were smart enough to equip the car with a thick pile of handout and pamphlets, which I ended up distributing to at least 50 curious people who threw questions at me. But having returned the prototype back, I am already missing the genial smiles I got from people I drove past.

A 1.2 kW Nexa fuel cell supplied by Ballard Power Systems, powers the Reva FC and acts as a battery charger. The PEM fuel cell is supplied by Scottish company siGEN. But just the fact that an Indian company has taken the initiative and worked on a fuel cell car, which only a few automobile giants worldwide have ventured to do, is a matter of national pride. I really feel privileged to be one of the very few people in the world to have driven a car with the technology of the future.

While it may not pack all the sensory pleasure which our cars today offer, the Reva FC gives us a taste of things to come, and frankly, my appetite is all worked up. And with gaming stimulation technology already making its way into everyday lives, I made up my own little dream. How about a fuel cell-powered car that, through its 128 bit microprocessor, integrates a real-time, stimulated force-feedback system in its interface, somewhat like your gaming Sidewinder joystick/wheel, but only better?

Having driven the Reva FC, and the promise of future technology it stands for, I can tell you the days of the internal combustion engine are counted – May ‘vrooom’ rest in peace.