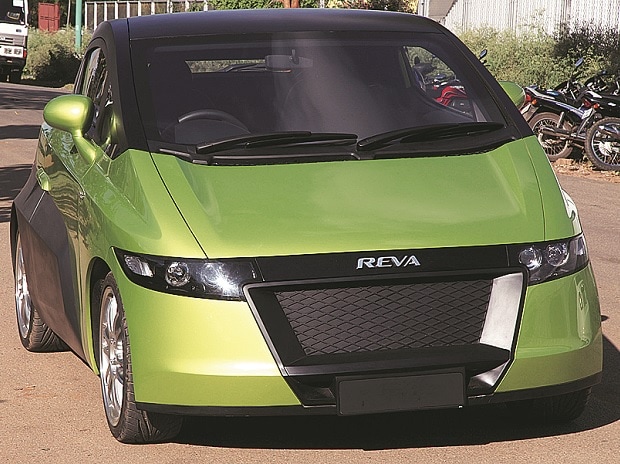 Chetan Maini, the man who gave India its first electric car, the Reva, is now looking to give the country its first real chance of replacing gas guzzling vehicles with zero emissions electric ones by making them more affordable.

Maini's new venture is looking to build modular batteries for electric vehicles that can be swapped out quickly at stations similar to today's petrol bunks. The company's battery as a service model could help reduce the initial cost of buying EVs by as much as 50 per cent.

"While the cost of an electric car is more than a conventional car, if you remove the batteries and all the electronics around the batteries, you can bring the cost under control. So electric vehicles could cost the same as gasoline powered ones," said Chetan Maini, Vice Chairman at Sun Mobility.

Sun Mobility's core innovation is a smart modular battery that can be fitted into two-wheelers, cars, trucks and busses quickly, serving as a more efficient option to charging these batteries over several hours. Maini says the company will solve the biggest challenges of EVs today - high battery costs, high charge time and limited range.

A 50:50 joint venture between Maini's Virya Mobility 5.0 and SUN New Energy Systems, the company is looking to run pilots of the system in Bengaluru by January 2019. Sun Mobility will partner with OEMs to build vehicles that can accept its battery pack and providers of renewable energy to operate its stations in a truly green way.

Sun's model will revolve around owning the batteries and essentially charging users for the energy stored within them, similar to how vehicle owners pay for fuel today. The upside for consumers would be that the electricity used to power their cars would cost significantly less than what they pay for fuel today.

"It allows you to have a very quick interchange, faster than what it would take to fill gasoline. It is going to be low-cost, less than what it takes you to fill your tank, and it's going to be more convenient, being fully digitally enabled," added Maini.

Sun Mobility, with the backing of SUN New Energy Systems says it is well capitalised to take the concept to pilot stage after which it will require a few hundred million dollars to deploy the solution. Uday Khemka, Vice Chairman of SUN Group, said that the company was already in talks with investors, but declined to share details of the investments.

Maini is setting himself a two year deadline for rolling out the service in a big way, with research into the location of battery swapping stations, partnerships with OEMs and other stakeholders already being in advanced stages. The batteries themselves will utilise intellectual property that Maini already owns, making them versatile enough for the same battery to be used in different vehicle models and even different platforms.

Having worked in the field of electric mobility in India for the past two decades, Maini believes it's the right time to introduce such a service in the country. Not only is has the technology and battery costs hit critical mass, but even the Indian government is more proactively looking at ways to promote electric mobility.

With 80 per cent of the country's fuel today being imported, mass adoption of electric mobility will allow India to significantly reduce foreign exchange. The government to this extent has set a goal to hit 100 percent electric vehicle sales by 2030, making the business case for Sun Mobility all the more stronger.