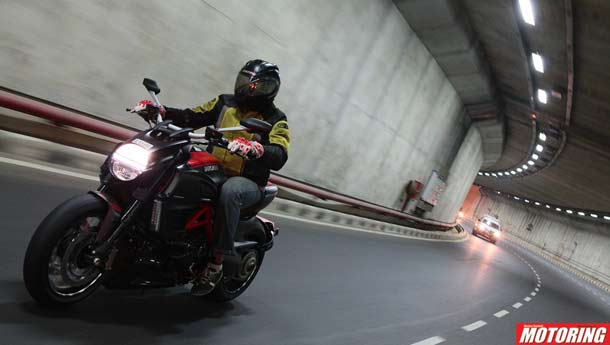 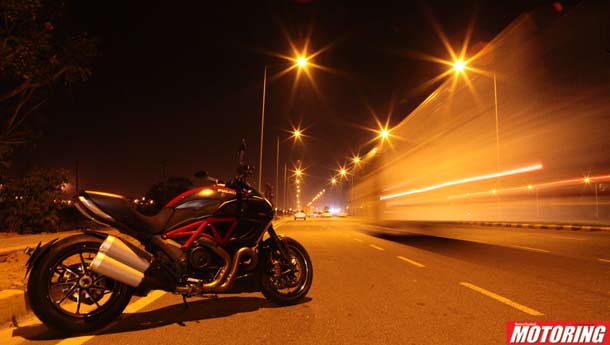 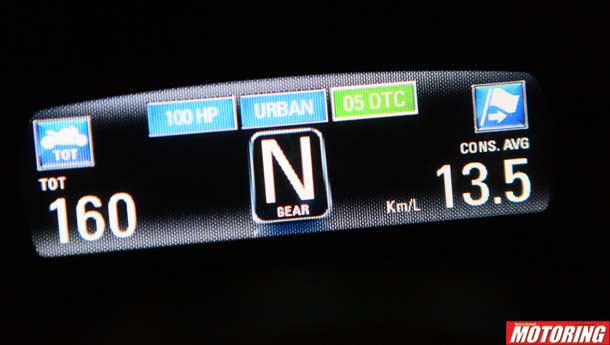 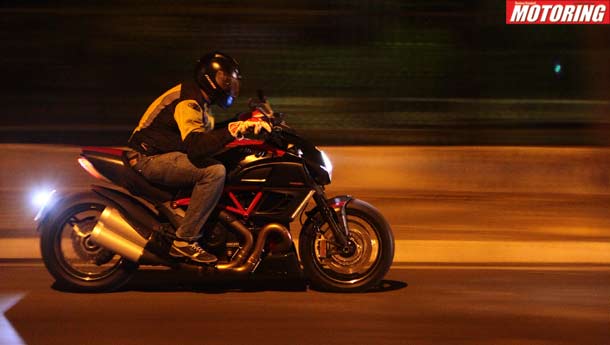 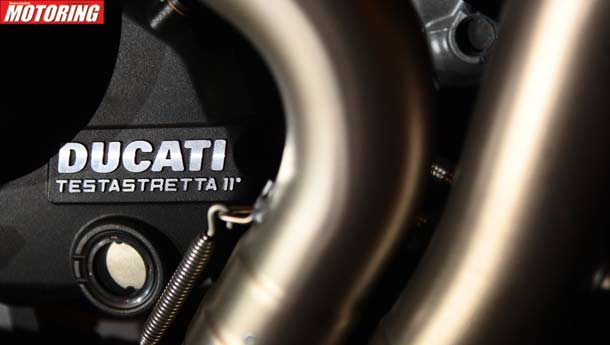 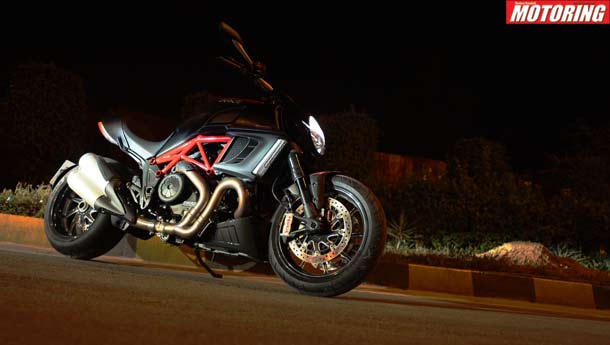 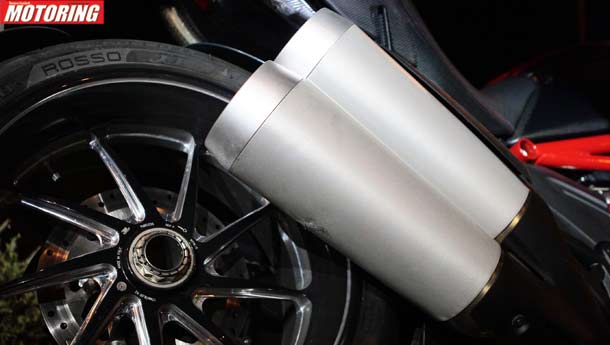 There’s only one thing to be said after powering through the darkness of the night aboard the strangest thing to have come out of Bologna in its history – it’s a motorcycle right out of Star Wars! Wait, hear me out. I think Darth Vader was recruited by Ducati as team leader so that the final product really is Diavel: ‘evil, like the devil’. I mean, who knows more about evilness than him, right? But The Joker was also roped in as a consultant (weird, I know) to give the Diavel a wrathful, twisted personality. I won’t be surprised if it is also sold as official Star Wars merchandise. How do you put a price tag on that?

It’s an assault on the senses the first time you see and hear this beast, let alone ride it. More so for the passionate Ducatisti who shuddered at the mere thought of a power cruiser coming out of their hallowed gates in Bologna. Was their beloved brand – a byword for speed – going to land with…God forbid…a cruiser?! Ducatisti begged and they pleaded, but Ducati’s top brass knew better and they stood by their decision and later, put the concept into production. It’s fair to say that there is almost nothing (save for Yamaha’s Mad Max) on the market that looks like the Diavel, which manages to infuse streetfighter, cruiser and sportbike cues effectively. The burly stance makes it look like the Hulk poised on the starting block of a race, but the dimensions are something that don’t really come through in the photos. Grounded on a characteristic Ducati red trellis frame, the Diavel is not just a side-stepping departure from the traditional Bologna rockets; it actually takes off at a tangent. It stands for what Ducati would and could mean in the future, while creating a whole new motorcycle segment that pushes the envelope in terms of design, technology and feel, still retaining what a Ducati fundamentally stands for. Phew!

The massive flush-fitting tank and seat on top are a complete contrast to the busy lower half of the bike, making the Diavel appear like you’re piloting a water scooter with a handlebar. But you’re not. Looking at it in real life makes your head spin with the sheer visual assault. Whacking great bronze-finished pipes, side-mounted radiators that lend muscle to its ‘shoulders’, a stubby hacked tail section with brutish-looking twin vertical tail-lights, a menacing front fascia, a 240 mm tyre with more rubber than on a dragstrip starting line I could go on and on!

As you spend time with the motorcycle, the more fantastic the little details become. The starter button is integrated with a sliding kill-switch, like a missile trigger, the master cylinders have ‘Ducati’ classily etched on them, there are Marchesini rims blacked out except for finely machined silvery detailing, a custom-looking rear number-plate bracket and keyless ignition. No one knows for sure what to classify this as, but the closest that I can think of is ‘Sports Power Cruiser’. Or you could just call it the Darth Vader motorcycle and be done with it. Whatever you call it, there’s only one word you can describe it with – ferocious. Actually, barbaric too. And wrathful…and…and…

Time to poke Lucifer out of his slumber. Crank the starter for a second or two and the Diavel springs into life with an all-too-loud burst of exhaust gases and reverb. There’s bass aplenty, the kind of bass that makes the earth and bystanders tremble. No doubt, it’s the familiar classic rock from Bologna, but there’s a deeper, gruffer twist to it that makes the hair on the back of your neck stand on end. Thoughtful sound-deadening placed inside the crankcase helps make the sound purer, with less of the mechanical clickety-clack. Snicking it into first with a smooth, positive action, I get rolling and immediately hit traffic. As I roll up to the lights, fingers are pointed, jaws are dropped and everything else appears dwarfed. Sitting in traffic on this otherworldly piece of machinery, a Ferrari Enzo could’ve rolled up on that street and few would’ve taken notice. The lights turn green and I pull the trigger on this 162 bhp behemoth. It doesn’t accelerate as much as it goes into instant hyperdrive, shooting to 100 kph in 2.6 seconds, as the giant 13 kgm-rated Testastretta V-Twin transfers herculean levels of torque to the giant rear wheel that lights up instantly, spewing smoke, but it eventually hooks up.

The whole bike hunkers down and blasts towards the horizon like it’s been shot out like a cannonball. The front does go light, but no real worries as there’s pure pace on offer here – just pin it and prepare to have the horizon lassoed and pulled towards you at warp speed. Beyond 6000 rpm, it threatens to yank your arms out with an unrelenting, furious rate of acceleration. The ever-ready, point-n-shoot nature of the Diavel, the sheer responsiveness and the wide spread of torque is thoroughly exhilarating; you cannot help but grin every single time the Diavel goes for it.

But for times when you don’t feel like having your arms yanked out, you can select the ‘Urban’ mode on the Ride-By-Wire equipped Diavel so that the Ducati Traction Control safety net is increased and power is restricted to 100 horses. ‘Touring’ mode unleashes all 162 horses with mellowed throttle response, but to truly understand what Darth Vader has pulled off here, you need to put it into ‘Sport’, to turn most of the world into a trippy blur. The sound coming from my helmet went something like – ‘Aaaaaaaaaaaaaaaaaaaaa!’ amongst many unmentionables. Not that it mattered. On this motorcycle, no one can hear you scream. Thankfully, Lord Vader was kind enough to put on those substantial Brembo Monobloc anchors, which, by the way, offer supremely good feel and tremendous braking power.

Despite feeling like it’s running purely on the fires of hell, the Diavel’s real forte is the ability to switch between Dr Jekyll and Mr Hyde effortlessly. After an hour on a crotch-rocket, when your back will already be speed dialling the doc, the Diavel still feels comfortable and you’d even want to do a 200 km trip in the middle of the night, just for the heck of it. The wide, comfy seat is the lowest in the Ducati line-up, while the pillion seat is neatly tucked away under a panel combined with extremely tidy, flush-fitting passenger pegs and flat, wide bars. Of the two displays, the handlebar-mounted one is more bare-basic for glances at speed, while the colour LCD display on the tank displays real-time telemetry and all of the fancy tech whiz-bang.

Despite having substantial girth, it still is discernible as the Ducati of the power cruiser crowd on the road, both in terms of weight – at 207 kg, almost a 100 kg (!) lighter than the V-Max– as well as in terms of cycle parts. This is a class apart from anything else in it’s… er, class. Using beefy DLC-coated 50 mm Marzocchi forks and a Sachs rear monoshock, the Diavel requires less effort to turn in than you’d imagine and once leaned over, it holds its line like a rock. At speed, the Ducati’s weight becomes less apparent and handling is leagues above its closest competitor, but it comes as no surprise given the handling wizardry Ducati is renowned for. For such a beast, we could call it poised and agile even. You wouldn’t need too much saddle time to get your pegs grazin’, let’s put it that way.

Clearly, Lord Vader has come up with a stellar (heh) product, combining near-superbike pace, sprightly handling with comfort all around, spaceships full of character, styling to kill for but most importantly, an evil, hard-hitting demeanour that makes Pantera feel like Boyzone. Considering all that and the badge value, the Rs 25 lakh asking price for this exotic Carbon edition (Rs 20.5 lakh for the standard) definitely isn’t cheap, but we’d say it’s well worth it. That said, we’d definitely bargain for a Darth Vader helmet and a light sabre from the dealer!