XBA hatchback will be the third volume product for Renault India after Duster and Lodgy and will majorly rival with Maruti Suzuki Alto and Hyundai Eon!

Renault India will unveil their global small car - codenamed ‘XBA’ in India on May 20th, 2015. The anticipated French hatchback will rival the entry level hatch brigade in the country - Maruti Alto 800/K10, Hyundai Eon (facelift expected soon), Chevrolet Spark (dying) and even the Datsun GO. Moreover, the vehicle has been spied testing plenty of times in the country while testing fully camouflaged. Expect the car to launch soon after its global unveiling on 20th May. 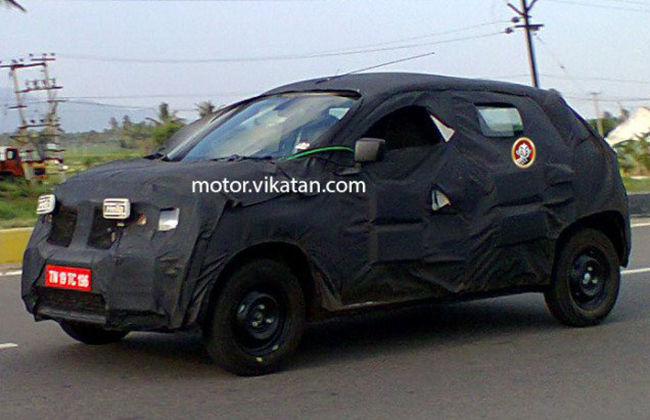 The XBA is based on an all-new CMF platform developed by the Renault-Nissan alliance. The Common Modular Family (CMF) platform was unveiled in 2013 and XBA will debut this platform in India. This platform houses from hatchbacks to sedan and even SUVs (the new Nissan X-Trail is based on the same platform). The Redi-GO that Datsun unveiled at the 2014 Indian Auto Expo was also based on the same CMF platform and few reports also suggest that the Renault XBA will be a premium version of the Datsun Redi-GO, although Renault has kept the XBA’s design a secret.

Speaking of the engines, reportedly its getting an all new 0.8-liter 3-cylinder petrol engine and will be mated to a 5-speed manual gearbox while AMT - automated manual transmission is also on cards.

Source : Renault will Make Global Debut of 'XBA' Small Car on May 20th in India