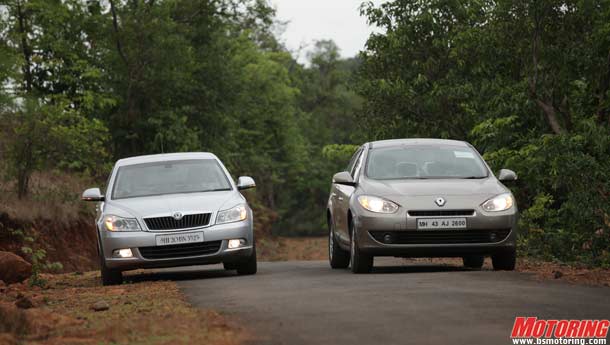 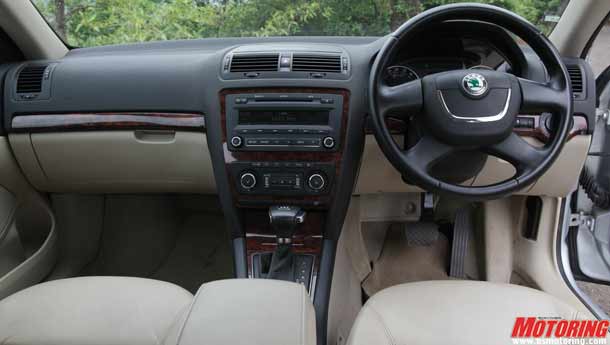 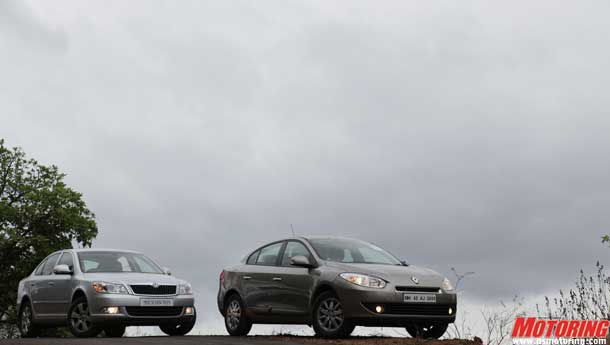 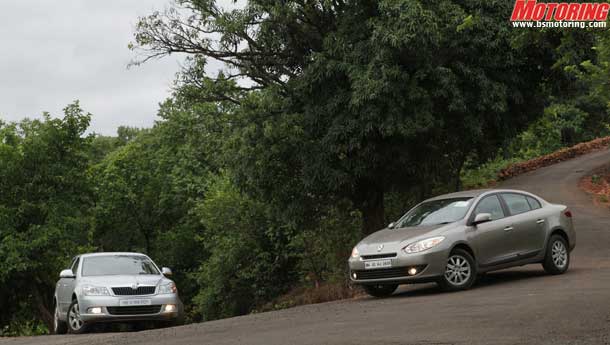 I usually live for the moment, but right now I am being wistful. Here are two diesel cars with different strengths, and I am thinking of another one altogether. In an ideal world, the Toyota Corolla D4-D should been here, fighting it out with the Fluence. But here we have the new Fluence which is not only cheaper than the Laura by almost Rs 2 lakh, but it’s of a different mentality compared to the Czech car. However, the world’s not a fair place, so let’s get on with it, shall we?

I believe the Skoda was designed using only a ruler; not that it is a bad thing, of course, because the Laura is a good-looking car despite being the older one here. The weird oriental headlamps it received in 2008 as part of a facelift is the only curvy thing on its outside. Compared to that, the Fluence is wavy and fluid and it has a prominent face with a mouthful of baring teeth – it looks as if it’s wearing a Korean mask! The Laura looks solid and muscular, while the Fluence looks like a European designed and built Japanese car! It has that new car look and there seems to have been an effort from Renault to make the car appeal to as many global buyers as possible.

There are many who love the way the Renault looks, but to me, it’s the Laura that is better looking. There is something about its stance and its rock-solid appearance that appeals to me and in black; it looks menacing as well. When seen in motion too, the Laura looks better than the gawky French car. The one thing I can say about the Fluence is that it is large (good for that big car feel we Indians love) and it looks quite different from any other car on our roads. And importantly, I am looking forward to that facelift, when the Fluence will carry the universal Renault group face penned by their new hotshot designer, Laurens van der Acker.

To borrow from that Maggi Sauces ad, inside the Fluence, ‘It’s different!’ There is some logic in the way things are placed, like the climate controls and the audio, etc, but somehow it feels, er, different. Perhaps it’s because the Start/Stop button still belongs to an LHD car. Or that the volume controls are behind the steering wheel. Then there is a gratuitous wave of plastic on that dash that just makes you feel funky all over. The display is also unusual in the sense it is digital rather than mechanical. But the issue is that compared to the petrol version, the diesel Fluence looks a bit de-specced while it is actually not. The quality of the stuff also looks pretty much capable of handling years of abuse. But I am afraid the vast black dash plastic will turn grey soon – hope you have a good relationship with a valeting service. The Laura, of course, belongs to the Volkswagen Group, so that means a degree of familiarity even if you have never sat in it. Straightforward, ergonomic, high quality, understated, etc are words that come tumbling out. Everything seems to be put together well and looks like it will all hold on for a long time to come. So it depends on what you like: the fluidity and the unusualness of the Fluence or the conservative solidity of the Laura. I prefer the latter.

Take one diesel engine, give it a range of outputs and fit it into a diverse bunch of cars of the Renault-Nissan empire. The 1461cc turbodiesel inline-four is something we are familiar with from the Logan and recently, the Nissan Micra. So how is it in the Fluence application? Here, it offers 105 bhp at 4000 rpm and 24.5 kgm of torque at 2000 revs. On paper, the output is pretty much decent, but there are moments on the road that you wish the Fluence did not lack in cubes. Add a prominent turbo lag to the equation and you’ll have to work your way around the Fluence’s power delivery. Yes, in other words, you’ll have to change your driving habits a bit to accommodate the dCi motor’s idiosyncrasies. It’s not much of a problem on the highway. Get up to cruising speeds and the car munches miles effortlessly while it’s stingy with the fuel – it better do that, otherwise what’s the point of a mall-capacity engine in a car as large as this? Overtaking is also accomplished well. But if you spot a Laura and try to take it on, don’t bother. The Laura has enough breathing power to keep the Fluence as a speck in its rear-view mirror. On city roads, the Fluence’s gearing factors in the engine’s power delivery and barring instances when you’ll have to slip the clutch at crawling speeds, it is a good commuter as well. Where the engine badly lets down the car is when you have a set of hairpins to ascend. It runs out of breath and more often than not, you are in first, trying to pull the Renault up the slope.

The Laura has no such issues. The strong 1968cc four-cylinder turbodiesel, with 110 bhp and 25.4 kgm is not too far away from the output figures of the Fluence, but what a different breed! More than fretting about fuel consumption, the priority of the motor seems to be to thrill you. And it does that by giving you the command of the torque as early as possible. For a turbocharged diesel motor with 110 bhp, the engine is entertaining. It is blissfully quick on the highway, and with one cog less to shift as compared to the Fluence, you are easily well ahead of it. Clearly, when it comes to the powertrain, the Laura has the upper hand here.

So any bets on which is the driver-focused car here? Yes, the Laura is definitely it. From the moment you sit in it and fire up the motor, the Skoda has the person behind the steering wheel firmly in its sights. The supportive seats apart, the driving position as well as the steering feedback is just right. When it comes to handling too, the Laura is well-sorted. It corners beautifully and eggs you on to try pushing it around the curves more, as if it’s playing a game of chicken with you. Its poise and stability is remarkable and it is a car that you’ll enjoy in the twisties. But it cannot be perfect. The ride quality of the Laura is too firm for comfort. It does not exactly absorb road imperfections and at moments, can be harsh too. That’s the compromise with the Laura.

And here is where the Fluence beats it easily. The ride quality of the Renault is impressive. It handles our diverse terrain very well and ensures that passengers are not left looking for grab handles for support. The rear room package is better than that of the Laura and is easily the better place to be in the car. Consequently, it is not a car that you want to straighten corners with. It is neutral most of the time, but unexciting to drive. The steering feedback is positive; nothing to complain about.

By now you would have figured that the Laura is the winner here. We love driver-focussed cars and easily, the Skoda towers over the Renault here. But at the same time, I cannot dismiss the Fluence. It is of a different mentality than the Laura. It is definitely better value for money, plus its focus is towards a different sort of person as compared to the Skoda. As a chauffeur-driven executive sedan, the Fluence is much better than the Laura. I know the verdict is predictable, but had the Corolla diesel been around, my life wouldn’t have been so easy. Next time perhaps.