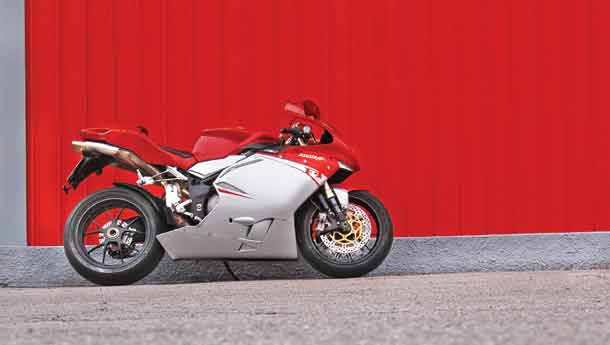 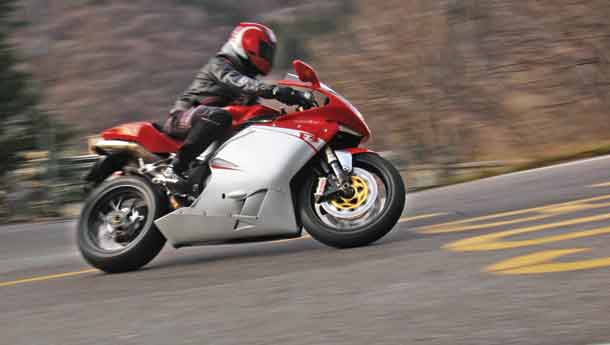 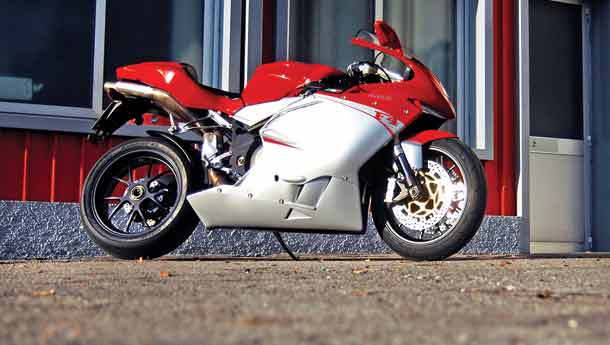 This can’t be happening. I can’t be bent over on an MV Agusta F4 312R, head behind the windscreen, knees gripping the tank for all they’re worth, toes on the rearsets and eyes widening in simultaneous wonder and fright as the digital speedo rips through numbers as if it were a stopwatch.

I can’t be on a dead straight stretch of Italian autostrada just outside Varese, near the Italian Alps, following a rider from the MV factory as he blasts down the road (mostly on one wheel) on a Brutale, at a speed that would probably mean instant deportation were the polizia to catch me. I can’t possibly be overtaking the occasional car as if it was standing still, nor can a blurring tunnel be forming on either side of me.

It’s absolutely inconceivable that I’m experiencing brick-wall deceleration by simply touching the front brake lever, when I look up from the speedo and realise that if I don’t slow down I’ll teleport myself into Switzerland. None of this can actually be taking place; it’s obvious that I’m in the middle of a dream and will shortly be rudely awakened. I’ll shake my head, stumble to the bathroom, splash cold water on my face and see nothing but my own mug in the mirror; no howling flashes of red and silver, no mountain roads, nothing.

But of course it did happen, and my arm is almost blue from pinching myself. In one of those circumstances where various wheels all move together in exactly the right way, I snagged a ride on the F4 in Italy, for which no small thanks are due to Joshua and his previous dealings with MV Agusta. This involved a train ride from Bologna to Milan and then another car ride to Varese, where the MVs are made, but the nice people from MV picked me up from Milan; in any case, I would have crawled all the way to Varese on my belly if necessary. The car ride only served to build up the anticipation, which I attempted to dissipate with conversations in broken, nay, shattered Italian with Alessandro, the driver. By the time I got to Varese, a lovely little town, the tension was almost unbearable; I was champing at the bit. ‘You are happy?’ asked Alessandro. ‘More than you can ever imagine, my friend’, I replied. ‘See, there is bike. Now you more happy!’ I looked where he was pointing and caught my breath – standing there, glowing in the soft afternoon light, was the F4, leaned over nonchalantly next to a Brutale, as if it were sharing a convivial cigarette with an old friend. My first instinct was leap out of the car, race off on the bike and never come back, but the small matter of an interview with Claudio Castiglioni, chief of MV Agusta, sobered me down (the interview follows this story).   Interview done with, riding kit borrowed and life signed away on the indemnity form (‘you break it, you buy it’), I finally got to stand up close to the bike and get an eyeful. Now, this thing started out in life as a 750cc machine in 1998, dropping jaws and lightening those wallets that could afford it wherever it went, and for a ten year-old design that’s remained essentially unchanged – well, knock me dead, it’s aged absolutely brilliantly. Looked at from any angle, it’s a breathtaking piece of design, managing to look fast, sexy, sophisticated and edgy all at the same time. Those quad pipes peeking out from under the seat are its calling card, of course, and they lend the bike a sense of urgency that a can on the side couldn’t possibly have achieved. Besides, side-cans are so... Japanese, aren’t they? The overall fit and finish on this machine is exquisite; no rice rocket could look as exotic and expensive. Everything looks and feels absolutely top of the line, from the tail light to the Ohlins steering damper to the massive Brembos. Perhaps the only sticking points are the headlight and the instruments. Both look a bit plain compared to the rest of the bike, and a Ducati 1098 will probably look better when seen head on. This is splitting hairs, though, and believe me, there’s not many hairs to split on this machine.

Time to ride. Fabio, the factory rider who is to accompany me on a Brutale, ran me through a few basics. ‘Very fast. Very powerful brakes. You be careful’. ‘Is that it?’ ‘Yes’ Er, right, then. I turned on the ignition (located on the tank) and ran an appreciative hand over the bike, still trying to bring myself around to the fact that I was about to ride it. A thumb on the bright red starter and the inline four whumped into life. I couldn’t resist a couple of gratuitous blips of the throttle, and the howl that spat out of the pipes had a hard edge to it, very different from the smoother sounds that mark out Japanese superbikes. A slightly stiff snick down into first, a gentle twist of the wrist and I was off behind Fabio, following him out of the factory.

The first 1000cc version of the F4 came out in 2004 and was instantly king of the top speed hill, blasting to 298 kph. In 2006, the F4 1000R beat off all its competition and set the fastest lap time at Masterbike, the famous annual sportbike shoot-out. The fellows who make the F4’s engines, therefore, definitely know what they’re doing. The bike I was on, the 312R, was thus named because it’ll apparently do a true 312 kph, or a staggering 193 mph. This makes it the fastest production 4-cylinder motorcycle on the planet, since the ‘Busas and ZX14s of the world are fitted with restrictors. Chassis-wise, it’s the exact same as its predecessor, but the boys in the white coats beefed up power by 9 bhp (it now makes 183 bhp at the crank), dialled in another 500 rpm, chucked in new 30 mm titanium valves, high-lift cams, larger throttles and shorter inlet trumpets, shook the whole mixture up and said ‘Enjoy!’ I certainly intended to, but the question was where? Fabio was leading me through Varese, which was very picturesque but hardly the sort of place to go postal on an exotic superbike.  Then the straight on the autostrada happened. Fabio certainly wasn’t hanging about, lofting the front wheel on the Brutale and tearing into the distance. ‘Here goes nothing’, I thought, and cracked the throttle open. The F4 stood straight up, scaring me witless, and I just about hung on and tapped the rear brake to bring it back down. After that, it was bedlam.   The engine note went all primeval, an explosion of raw aural violence unlike anything I’ve experienced on a motorcycle before, and the yowl from the quad pipes only got louder as the revs edged near 10,000 rpm. I hung on for dear life, glancing at the speedo as it blew past 250 kph in a ridiculously short span of time. The engine, by now, had smoothened out considerably, and as I kept the revs up hard through the gears, I experienced the most amazing sensation – it was as if I was floating above the road, rather than helping shred the tyres on it. I would have kept going for ever if possible, but the sight of a roundabout up ahead was enough to have me scrambling for the brakes. I remembered Fabio’s warning and squeezed gently, but was still shocked at the way the Brembos reined the missile in; the damn thing stopped so quickly that the rest of the world travelled backwards.

Totally exhilarated, every nerve-ending buzzing with energy, I tailed Fabio through narrow lanes and light traffic – and learnt something very quickly. This machine was a race bike for the road, with no apologies. It was cramped, the riding position was totally committed and it was stiffly sprung, which meant that slow speed riding was a bit of a pain, quite literally – my wrists were aching and my calves cried out for mercy. The fuelling at these speeds was also a bit snatchy, and the gearbox noticeably notchier. Clearly, the faster you ride this bike, the happier it (and therefore you) feels. Still, it’s also renowned as a corner carver, and Fabio was clearly heading to a hilly section of road in order for me to get a feel of the bike in the twisties.

The first section of tight corners soon appeared, and Fabio set a lightning pace through them. He was soon far ahead, as I negotiated the first few turns gingerly, settling into a different rhythm from when we were shooting down the highway. There’s always a certain amount of fear when you’re riding a fast, very expensive bike through a series of corners, but I soon realised that this was misplaced. It was obvious that the bike had been set up for corners, and the pattern soon became select braking spot-lean in-hang off-straighten up-power out of the turn. The 312R’s heavier than most other superbikes (none of the trick carbon fibre and magnesium bits of the various F4 specials on this one), but personally I was thankful for this fact. A couple of other Japanese superbikes I’ve ridden are almost too flickable, and the extra weight, for me, was a confidence booster on a road like this. Flat out on a track, the bike would probably show its weight, but then I wasn’t flat out on a track, was I? This bike was talking back to me for sure; in a foreign tongue, at first, but I was beginning to understand it.I was soon confident enough to push the bike so I could at least keep Fabio in my sights, and the rest of the way up and down that hill was probably the best time I’ve ever had on a motorcycle. I felt I knew the bike enough to have some fun on it, so I hung off further, rode harder and grinned wider at every corner. We stopped at a few choice spots so I could quickly shoot some photos (I wanted to spend every second possible on that bike!), and then I followed Fabio back to the factory, this time managing to keep within a few bike lengths behind him. We burbled in and parked, both of us simultaneously taking off our lids and grinning. ‘You like, eh?’ he asked. Frankly, I was speechless and simply laughed. My hands were quivering and my calves were in extreme agony, but I had just had the bike ride of my life and wished that I could stay an extra day just to ride some more. I knelt reverentially next to the F4, thinking about the fact that you could go almost as fast for less than half the price on a whole host of Japanese superbikes. But would they stir the loins in such a manner? Would you feel hopelessly, inexplicably emotional upon merely looking at them? In a word, no. Sure, it’s expensive (and you know the rule about ‘if you have to ask...’) and it would be a struggle to ride daily in the real world, but that’s not the point. The F4 isn’t simply a motorcyle; it is, as the MV brochures say ‘motorcycle art’. Some people ‘get’ art, some don’t. I sure as hell got this masterpiece.