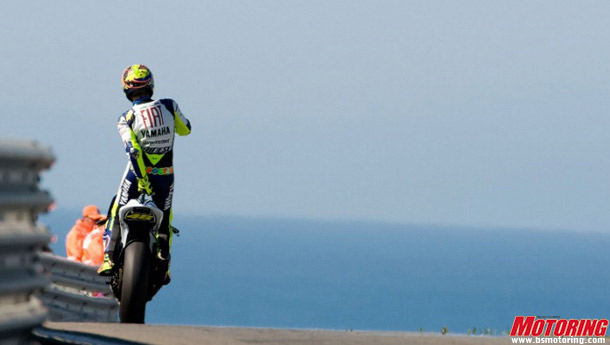 Sigh. I'm going to have to buy a Ducati now. What, you haven't heard? Valentino Rossi's going to Ducati next year! I already possess a Honda and a Yamaha that are in the process of being turned into 'Rossi bikes' - the Honda painted in NSR500 colours (Nastro Azzuro and all), while the Yammie gets my interpretation of the famous blue and white M1's colours. Yeah, 'obsessed' is the word you're looking for. But it's not like the man doesn't deserve the tiny little tributes that I'm fashioning.

You certainly don't see his kind every day. Just the fact that he's gone through three generations of rivals is a feat enough. But so has Loris Capirossi. Rossi's different than his compatriot - he's managed to beat his rivals as well. And they were/are really good - Biaggi and Gibernau were, in my opinion, the greatest racers never to win a championship. Rossi ensured that with a five-year rout. But both Biaggi and Gibernau fell from grace due to assorted whining campaigns against the much-loved Rossi who only had to flash his impish smile to turn the grandstands into a 46-waving tidal wave. Today, there's Stoner and Lorenzo, the former already a champion in 2007, while the latter has one hand on the 2010 crown. Two youngsters who've managed to beat Rossi. And that's not an easy task. Besides, broken bones heal much faster at 24 than 32. Rossi's nursing a broken leg and shoulder, while his rivals are fitter than him. You don't see that very often either.

But now, Rossi's moving to Ducati, leaving behind a team that was increasingly favouring Lorenzo the future star. Right. By doing so, they've paved the way for an unstoppable combination. I'm being thoroughly biased here, but it's true. The Desmosedici is one hell of a bike. Rossi is the best developmental rider there is. And if Jeremy Burgess & Co. choose to follow Rossi to Ducati, other manufacturers will be thinking, 'Not again!' Remember what happened when Rossi moved with Burgess from Honda to Yamaha? They won the first race at Welkom on a bike that was decidedly a poor performer compared to the all-conquering Honda RC211V. Yet, Biaggi inhaled the M1's exhaust fumes all the way to the finish line. The Desmosedici, on the other hand, is already ready to win. I can't wait to see The Man in red.

At Mugello 2010, where Rossi crashed and broke his leg, there were more Rossi fans than ever before. What I remember quite vividly is the Ducati stand turning into a white number 46 on a red background in a display of respect for their fallen compatriot, while Rossi watched it all on TV in the hospital. That must've done it, I think. So, while Rossi will be seen on an Italian stallion next year, I will be daydreaming of getting my Ducati some day. 'Which one?' is now the question. 'A red one, of course,' is the answer. Heh heh.