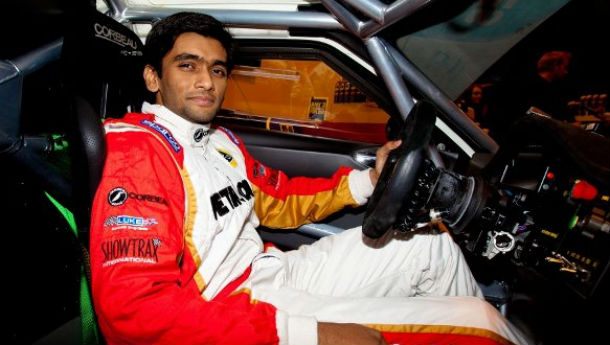 Ever since I signed up to drive in the British GT championship with the Lotus Sport UK team, I had been looking forward to getting my hands on the Evora GT4 and going flat-out on a race track. After two months of longing – the moment was finally here when I went through the gates of the Silverstone circuit for the media day.

I straightaway made my way to the team garage and there it was, in all its glory – my pride and joy for the 2012 season. I would have to share it, of course, this being endurance racing and two drivers alternating the driving duties in the same race. Somewhat like Le Mans, only quite a bit shorter!

The popular British F3 championship also had their media day scheduled at the same time, since both championships are run by the same promoter so there was a fair bit of crowd, press and drivers included. Even British Touring Car star Jason Plato made an appearance! Despite the limited time, we had a fair bit of stuff planned for the day. My experienced team-mate Phil Glew was the first to take the wheel to see if everything was in order, and later it was my turn.

As I got strapped in and trundled out of the garage into the pitlane, I was excited, scared, curious and grinning with anticipation under my helmet at the same time. I hadn’t touched a race car in almost five months and now I was behind the wheel of a hardcore 360bhp beast. But I quickly realised it wasn’t the friendliest place to start with if you’ve only driven front-wheel drive cars before!

On the out lap, I was focussed like never before – the car was far quicker in a straight line than anything else I’ve ever driven.The acceleration was brutal and the paddle-operated sequential gearshifts were like gunshots. But even in this storm, there was calm as the car felt planted and stable.

In my experience, the logic of racing goes thus – brake in a straight line, spot the turn-in point, turn, and start applying throttle before the apex to maximise corner speed and go full-throttle past the apex. When I followed the drill above in the Evora, I instantly found myself auto crossing in the run-off area. It wasn’t a massive detour, but enough to make a dent in my confidence. From then on, I reduced the intensity of whatever I was doing so I had enough time to react even if something went awry.

What I discovered was this – it was extremely difficult to apply throttle through the corners without the car pitching sideways in oversteer, with Silverstone being all about fast corners (and me having no clue of the new layout) and throttle application, I was struggling. We didn’t have time to do much digging as it was time to pack up and head to our actual testing destination – Oulton Park.

The next day, we arrived at Oulton Park - around 131 miles from Silverstone. In the pre- world championship era, F1 cars were often raced here – although I cannot fathom how since the layout is more like a tarmac rally stage than a race circuit. It isn’t the surface – which is impeccable – but the steep gradients and tricky bumps give it a lot of character, and make it very challenging to drive.

The car had some alignment issues from the previous day and once they were sorted out we were good to go. As always, Phil took to the track first to set a benchmark and then it was my task to get as close as possible. This time though, I was more prepared. Before our session, we went out in Phil’s road car for a sort of a track walk – only not on foot. He gave me some inputs on braking points, turn-ins and such, so even if I hadn’t set foot on the circuit before I was a little more clued-in unlike completely being at sea in Silverstone.

During our little tour, I was taken aback. Everything – braking, turn-in and throttle application was completely different from what I had learnt in all these years driving FWDs. It was no surprise as I was trying to adapt my ingrained techniques into what is supposed to be a completely different style of driving. Unlike most of my counterparts, I’ve never stepped even in a single-seater, so I had no clue about the relationship between the throttle and rear wheels.

Braking was another critical aspect – the rule of braking in a straight line doesn’t apply here, rather you need to brake into the corner. Yes! You start turning in while still on the brakes, which is opposite of what I had been doing. Simply put, you can brake much later this way and still carry more speed into the corner. So I had to radically change my driving style from the get-go, and the result was immediately clear. The car suddenly seemed so much more stable and felt like it had five times the grip than I thought it had at Silverstone. The fact was nothing had changed, it merely demanded a different driving style.

I was thoroughly enjoying myself now, although there was some traffic on the track (it wasn’t an exclusive test day) but I was consistently edging closer Phil’s times. The team was actually surprised as they expected me to take significantly more time to get up to speed, coming from a FWD background.

As the day ended, I was left satisfied with my efforts and the team was pleased with my progress. I learnt a lot and there is still a long way to go. The team is incredibly friendly and supportive, and top it all we learnt that the car was actually a second quicker compared to last year’s times, so it’ll help us being more competitive in the championship which kicks off on April 7th at the same circuit.