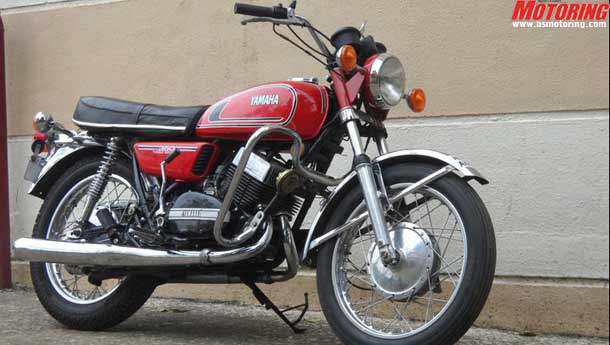 Mention the initials RD and almost everyone who knows something about motorcycles will go weak-kneed. To those who are still not initiated (what?!), RD stands for Race Derived or Race Developed and is short for the Yamaha RD350 - a motorcycle that was 'dumped' in India between 1983 and 1990. Thank God!

Dumped? Yes, you read it right. When Escorts was scouting for partners to build a modern motorcycle in India, they realised that they can get the Yamaha RD350’s toolings for cheap from the US where two-strokes were being progressively banned. The resulting joint venture meant that a two-stroke, twin-cylinder, 350cc, six-speed, 31 bhp motorcycle was unleashed on the unsuspecting Indian audience under the name Rajdoot RD350. The motorcycle returned around 25 kpl at best and this affected sales. Especially since modern two- and four-stroke bikes came in the very next year and some, like the Hero Honda, were returning 80 kpl! But those who came to know the RD started worshipping it for what it was. 100 kph in around 8 seconds and 150 kph plus? Well, the RD350 soon earned the name 'Yamdoot' thanks to those who couldn’t cope with this prodigious performance combined with poor drum brakes.

I remember the first time I rode the motorcycle, I returned with white knuckles. All right, white everything. And I promised myself that I will own one some day. Another friend of mine bought one using his dad’s money and crashed it into smithereens in the first week itself - luckily, he managed to clamber on to the same wall on which the bike eventually exploded onto seconds later. There was a period in the Nineties when there were no spare parts available for the RD and that meant rat bikes that were fast but very unsafe. But the legend of the RD was in full bloom soon - as those who rode puny 100cc Indo-Jap motorcycles bowed at the RD altar every time they came across one. They knew they stood no chance when twin-pipes spewing toxic blue smoke thrummed and passed you in a flash.

Old or young, immaculate or with slapping pistons and snagging chains, the RD had enough left in it to the kick tail-lamps of competitors. American magazines of the late Seventies talk of RD350s running rings around motorcycles with bigger capacity four-strokes. And loose variants of the same motorcycle produced 90-odd bhp and screamed around race tracks around the world, winning everything that looked silver.

One of the first things we did as a magazine is to start the BSM RD350 clubs across the country. We went from town to town to organise the first rides and even gave away prizes for best restored RDs. Some of these clubs still continue to flourish and many more new ones have come up. Almost every town worth its name has its share of RD350s today and the owners do meet up and go for rides together. We even got a letter from the founder of an RD350 club in Coimbatore that makes orphanages their destinations and sponsors meals for children. Brilliant isn’t it?

All this also meant the price of the RD350 went up through the roof. And when that 'someday' arrived, I had to pay through my nose to get my very own RD350. Dream come true? You bet.