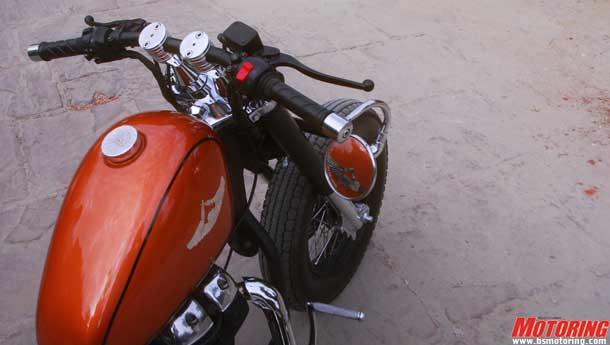 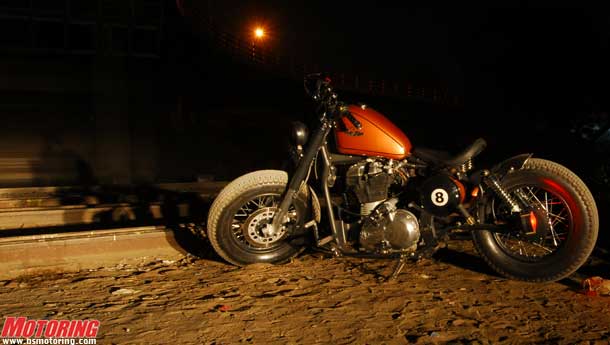 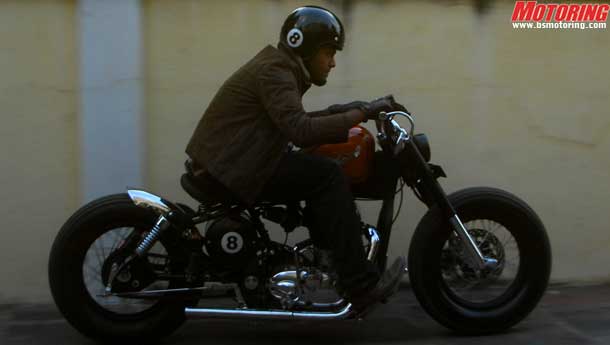 Ever since WWII, people have been rebuilding perfectly running motorcycles in order to stand out from the crowd. They did this by customising their motorcycles in such a way that they didn’t look like any other, while some chose to be ahead of the crowd, rather than in it. And the cheapest and most effective way to go faster was to lose weight.

Who needs those deeply valanced mudguards and the pillion seats, anyway? Promptly, they were chucked away and the missus had to make her own travel arrangements. They were bad-asses, they didn’t mind spending the night on the couch. What was left behind was pure distilled motorcycle – an engine, a pair of wheels, a handle bar and just enough stuff to give some semblance of control. And tonnes of attitude.

From those beginnings comes the 8 Ball – the latest creation from Rajputana Customs. This motorcycle has been built around a new Royal Enfield 350cc unit constructed engine (UCE) and the frame is pretty much stock. In true bobber tradition, everything else has been sent to the scrapers, just the way we like it.

The quote ‘behind the 8 ball’ is slang for being in a difficult position, among other things. However, with this one it’s a whole different er, ball game – the riding position is comfortable, the pseudo sprung seat holds my butt just where I want it to be and the kicked-out foot pegs shoulder my feet without tearing my knee ligaments. A low bar, slightly swept back, gives my arms a comfortable perch and the inverted mirror, aside from looking cool, shows a good deal of what’s happening behind my back.

The bobber is a minimalistic machine, and that fact has kept the usual Rajputana extravagance to a bare minimum. In fact its beauty lies in its simplicity. The trademark engraving is limited to just the tank cap and the tail light rim. But this doesn’t mean that there hasn’t been any effort on the minuscule details. Take the handle bar risers for example. Each of them has been tortured into shape on a lathe machine from a solid block of metal, finished and then chromed to shine in all its glory.

The tank is a ‘peanut’ job, designed to be compact enough to flow with the compressed lines of the bike, yet hold enough fuel to allow for a decently long ride. Tucking away the eye-sore called the battery is a nightmare for any custom motorcycle builder. Rajputana Customs have ingeniously shielded the rectangular box of ugliness and other electricals into a cylindrical container, which has been placed just behind the rear downtube of the frame. To spruce things up, and in keeping with the name of the bike, the cylinder has semi-spherical covers on either end, which have been painted to resemble an 8 Ball straight off a rather massive pool table.

Okay, so now that I’ve firmly established that I’m a fan of how this motorcycle looks, I shall go on to tell you how it rides. Having a stock frame helps matters. Motorcycle chassis design involves a lot of engineering work and it’s certainly more than just making it look right. Big, meaty tyres can drastically change the way motorcycles handle and I was certain that this thing would be one lumbering two-wheeler to wield.

Boy, was I wrong. On the move, the bars on the 8 ball need only a little more effort to change direction, as compared to the stock motorcycle, and before long, you get so used to it that you won’t even notice it any more. Until you ride an untouched bike, that is.

The absence of a speedometer doesn’t stop me from realising I’m at a decent clip. I’m wearing an open-face helmet and my sunglasses are firmly pushed back onto my face with the wind. I can hear the engine gulping in air through the free-flow conical filter, while the straight-through pipe blasts unrestricted sound waves into the ears of unsuspecting passersby.

A ferris wheel-sized Avon tyre clears the traffic ahead as I plough my way through the roads of Jaipur. The more obstinate ones need some tactful overtaking. Seeing an opening, I pin back the throttle and the big single begins to spin faster and the sonic blast keeps building. Sure, it isn’t as quick as a 500 would be, but the sheer audio and sensory accompaniment make you feel you’re going faster than you actually are. You could be doing about 70 kph, but the 8 Ball will make you feel like you’ve just been shot out of a cannon.

Although stripped down to the bone, this motorcycle is not the mere sum of its meagre parts; it’s so much more. It amplifies every positive emotion and thought, while the negatives are left far behind. The road ahead begins to take an almost spiritual journey, while the way behind is immortalised in a fond memory. This, my friends, is one heavy motorcycle after all!