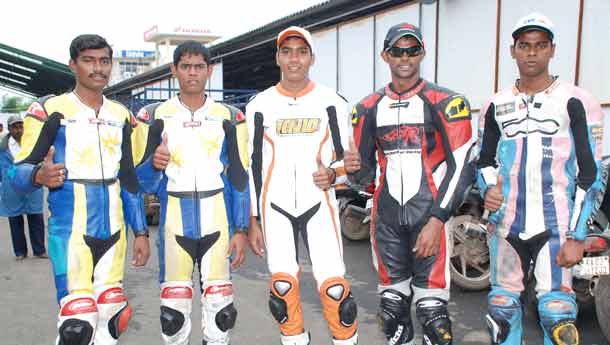 The final round of the Sidvin FMSCI National Racing Championship concluded at Chennai's Madras Motor Sport Track and despite that fact that there was rain aplenty, some fans did make it to the track to witness the event. National titles have now been declared for the 2010 edition of the country's circuit racing championship. Here's how things went in each of the classes:


Sarath Kumar of Ten10 Racing and Harry Sylvester of TVS Racing did duel in Race 1. Eventually the win went to Sarath who had a lead of 26 seconds. Sarath managed to win Race 2 as well, giving him a total of 85.5 points, enough to clinch the championship. Second place went to TVS Racing's P Karthik, while K Jagan, also of TVS, took third in the championship.

Red Rooster Racing's K Rajini certainly was in his element in Race 1. He took victory over Sumit Lucas Toppo of Blue Arrows Racing. V Vikram of Ten10 finished third. In the second race, Rajini didn't have the greatest start, but over the course of the race he opened up his lead over Sumit. A tally of 80 points handed Rajini the championship. Sumit finished second and M Gautham finished third in the points standings.

Race 1 saw P Deva Kumar of Moto Rev India lead from start to finish. The battle for second place was hotly contested though, with S Rajkumar and A Sathish Kumar fighting it out. Rajkumar finished second though and Sathish had to settle for third. In Race 2, Deva Kumar went out of contention on the second lap itself. This left the field open to Sathish and Rajkumar, who finished in that order. Vivek Pillai took third. However Deva Kumar’s exit did not affect his championship prospects as he had already built up an unbeatable lead.  With 80 points under his belt, Deva has won the title.

Team Moto Rev India riders, D Dinesh Kumar and B Naveen Raj fought for victory in Race 1. Dinesh won, with his team-mate in second and Ten10's M Sudhakar in third. In Race 2, things weren't that good for Dinesh Kumar. He won on track, but was later disqualified for unsporting conduct. This meant Naveen took race iwn, with A Prabhu took second and Ten10's EB Arjun took third. This ensured that A Prabhu clinched the championship with a total of 78 points.

TVS Racing's  GR Santosh registered  a win with a very huge margin in Race 1 as he took the chequered flag 19 seconds ahead of his nearest rival B Naveen Raj of Moto Rev India. Naveen’s team-mate P Anand Kumar finished third. In Race 2 it was Naveen Raj who took the top slot  while Santosh had to settle for second place. Finishing in third place was Dinesh Kumar. The championship title in this class was annexed by K Prakash of  Team TVS Racing with a tally of 70 points.