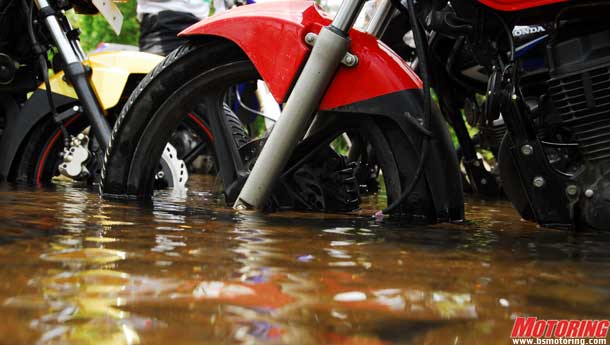 If you have ridden a motorcycle in the rains, I'm sure you've experienced the various factors that can make life completely miserable for you. Visor down means foggy-to-zero vision in seconds. With the visor up, a gentle drizzle feels like a needle shower on your face. That and the priceless feeling of riding with a wet crotch, wet socks and hard denims turning into an adhesive-like skin put one off motorcycles in the monsoons within a couple of showers.

Local trains are a way out but the Indian monsoon has time and again rendered them useless under heavy rain. Cars, primarily, can't wade through traffic and when the rain Gods unleash the worst, can't wade through water as well. So a motorcycle it is for me and I think i'm amply prepared to keep myself dry this year. I haven't generally shown great flashes of foresight, but this once did just that by picking up almost-knee-length rain/safety boots for a massive discount at the onset of the winter of 2010. Damages? 300 bucks! They'd been neatly stored for over six months and take care of the wet socks issue (apart from actually proving to be quite-alright riding boots) without so much as a squeak.

Where foresight couldn't help was in sourcing me a rain-suit, which retailers (most of them, at least) won't sell you at any other time of the year except when it begins pouring properly. Still, I put my bargaining skills to full use and landed myself a bright blue (visibility is of ultimate importance, no?) rain suit for 500 bucks. Lastly, i'd picked up rubber-top soccer goalkeeper gloves a few years ago at a superstore and peeled off the rubber on the palm. So raindrops simply slither down the rubber-top, keeping my hands completely dry and giving a motogross-glove like grip on the handlebar.

PS. I set out on what I thought was a perfectly rainy day but turned out to be a scorching 40 km commute. My gear is effective, but it hasn't rained in two days. If it doesn't rain tomorrow, i'll have burn marks on my hands to show. Bad Murphy!