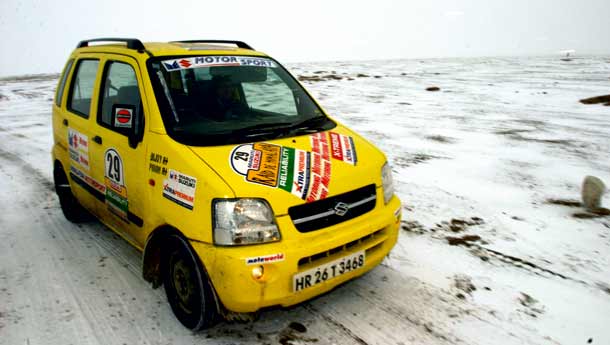 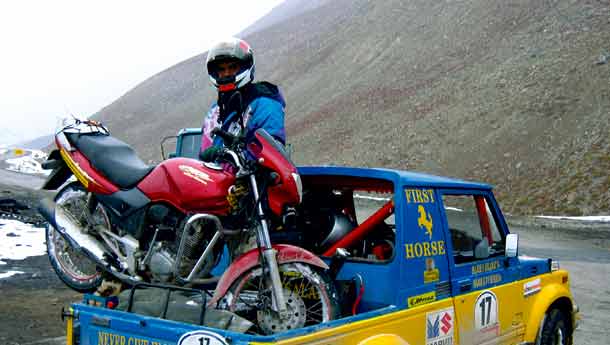 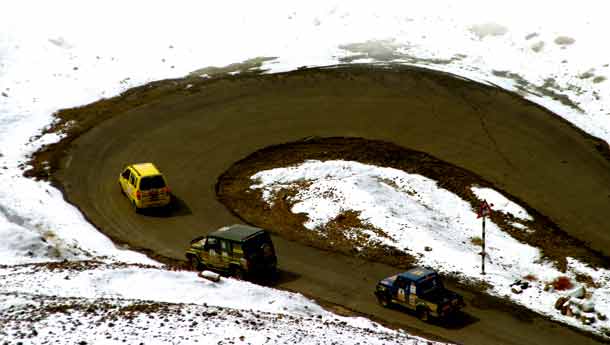 An icy wind was blowing through the car now. The temperature had plummeted well below the 0° Celsius mark, and Nature, it seemed,  was mocking our failure. Our bright yellow Wagon R was perched on a cliffside, at 15,000 feet above sea level, during our attempt to cross the 16,050 foot tall Baralach La. We had struggled hard to reach here and were repeatedly attempting to clamber over an endless incline of packed ice which hid reassuring tarmac. One more try, then – gentle on the throttle, quickly into second, turn the steering wheel lock to lock, try to find a rough ice patch and some traction... The front wheels start spinning, I try not to touch the brakes... panic... Panic hard, brake, pull the hand brake, engage reverse gear, and pray as gravity and ice win again. The Wagon R toboggans backwards helplessly, coming to a halt only inches away from the cliff edge and certain death. Icy wind. Failure. Again.

‘Abandon two-wheel drives,’ someone was screaming through the snowstorm. With the wind picking up and blowing tons of snow on the windshield, we had run out of options. We could not have endured the night in sub-zero temperatures at Baralach La. But abandon dear little Chiclet? Yup, that was the nickname our little Wagon R had earned during the first few days of the sixth Raid de Himalaya.

We were contemplating the options when a service crew in a Qualis inched up the same ski ramp. The stupid driver, after seeing other cars fail, thought he could make it, and that too with a full quota of passengers and luggage. The Qualis struggled halfway up, and predictably, started its skidding backward journey. That driver, his passengers and his vehicle would have become footnotes in the Raid’s history had the out-of-control Qualis not met with the front end of our parked Wagon R.

Bang! Our smart tallboy now sported a mangled right fender, a crumpled bumper and a very startled crew. Luckily, the damage was only cosmetic, and we knew we would be able to drive on when the weather permitted. For the time being though, the priority was our very survival.That meant hitchhiking. A few Raid cars, including a couple of two-wheel drives, had gone through before the storm had intensified, packing and hardening the snow – leading to the situation before us. Power to the front wheels? Maybe chains would be a better idea, Param and I thought. We picked up our backpacks with the mandatory high-energy emergency rations (read: chocolates, Tropicanas, canned oxygen and first aid) and sleeping bags and started trudging up.

The air was thin, and the ice beneath was slippery. Those in the 4x4s making a hurried dash for the pass, didn’t want the additional burden of passengers (which could mean getting stuck on the way up). After a kilometre-long trek, we came across a red Gypsy, expertly piloted by Sanket, his father playing navigator. The good Samaritans were bailing out as many stranded souls as possible. There was enough room for just one more person in the Gypsy – Param could squeeze in, I couldn’t. Fellow scribes from Overdrive, Sirish And Bertrand, had parked their Esteem alongside our Wagon R, and were on the lookout for a ride too.

Then, out of the all-engulfing whiteness, came a white Gypsy. Like an angel from the clouds. We’d been refused rides in the open pick-up beds of some gypsys before. However, this time, I found myself jumping into the open cargo bay of Gaurav’s car with Bertie – Sirish found space in the cab. Soon I had to clamber out to help push the machine over zero-traction slopes, jumping back in for a breather, jumping out again....   I was wearing five layers of clothing (we had come from Pang, which resembled an Arctic camp the previous night), with a proper cold-weather motorcycle jacket wrapping it all (thanks Shumi!) but was still shivering violently. I had fallen twice and my driving shoes had taken in water, fast turning into ice. My wet gloves had developed frozen tips too.

Severe crosswinds weren’t helping either. I felt icicles forming on my moustache. This was the beginning of the coldest day in my life. And that was before wind-chill from the now moving Gypsy kicked in.

It was just too cold and our tired and frozen bodies felt like they’d lose this battle. Occasionally I woke to angry shouts from Bertie – it was important to be in our senses and fight passing-out. I yearned for my bed, I dreamt of a bonfire and grilled chicken. I wanted to be with my wife and kids. I wanted to hug my daughter. One last time.

The Gypsy came to a halt – it was Param checking on us, while Sanket threw a couple of blankets over us. Sirish passed on a bottle of brandy and I couldn’t quite hold the bottle, I still managed a good swig. Sanket was changing a blown tyre on his Gypsy. It was some time time before the mini convoy moved on.

To cut a very long story short, after about three and a half hours and 51 kilometres, we reached Jispa, which has the only hotel between Pang and Keylong, where most of the Raid organisers had put up. Despite jugs of hot it took a while for our numb limbsto tingle back to life. Countless cups of tea later, I managed to control the shivering and a nasty nosebleed.

And we were the lucky ones. Some Raiders were stuck in Sarchu in leaky, icy cotton tents, others were in army barracks at Patseo – basic fare but warm. The really lucky ones had got through to the comfortable HP Tourism hotel in Keylong 30 km ahead. I think about 20 vehicles lay abandoned around Baralach La that evening.One Qualis driver stayed with his car too long, eventually surviving a 21 km walk to Sarchu through the night. A veterinarian, another Raider – in a carburetted Maruti 800(!) – was the only medical help at Sarchu. The army was doing it best to keep up with the sudden inflow of ‘guests.’ One army Stallion alone had picked up 50-odd people that night. Once we were sure everyone was safe, we tried to get some sleep. Jispa resembled a Swiss Alps valley in the morning. Snow lay a foot deep; it had fallen heavier in the mountains. The moment we realised this, we knew we were staying a while. Soon the news came, Rohtang Pass was closed at least for a few days. We adapted. We built snowmen, had snowball fights, red, drew cartoons, played chess and some tried endlessly to call people from long-dead phone.

Thanks to Maan Singh and his navigator, we’d been re-united with Chiclet, fresh underwear and our clothes. On the third day, a few of us we drove out of Jispa to Keylong just for the heck of it. We had a bit of a party at Keylong as we met long-lost fellow participants.

The next morning, on a hunch and a tossed coin, a small group decided to make a dash for Koksar, the base camp to Rohtang. Luck and the sun were shining, and we were granted permission to go through. The drive was easy to begin with, treacherous later and downright dangerous towards the end. The 13,050 foot Rohtang, where Bajaj Chetaks and Tata Sumos ply on a normal basis, looked straight out of the bowels of Antarctica. Snow-cutters had been busy for four days, cutting a path through solid ice. The Border Roads Organisation also had to deal with about 60 overloaded trucks, recklessly abandoned all over the Pass, blocking the way. Halfway up, our convoy came to a complete halt road clearing had slowed down  and there were still a couple of trucks to be moved. Hours later, we could started our drive down. Night had crept in, and lights blazing, our cars crawled along at 10 kph. Slipping, sliding. No brakes, dabbing at the accelerator only when it was most needed, nursing the steering like a premature baby and keeping fingers crossed, we finally reached Marhi. The Bridgestones finally found familiar territory – hard tarmac. A cruise to Manali and a wild, relief-laden dinner and celebrations over trout and beer followed.

We had made it back into civilisation! As for the event, I realise there are people around who thought the Raid organisers could have avoided a lot of misery for the participants. While I’m sure Himalayan Motorsport and participants alike will be more prepared the next time around, it’s easy to forget something else – every participant comes to the Raid in search of the ultimate adventure. It’s just that this time, most of us got a bit more than we bargained for, and that includes the organisers!   HOW CHICLET FARED

Day One:
Shimla to Manali via the 10,280 foot Jalori Pass. The toughest day of the Raid. Average speeds were higher and we had an all-new off-road section. The Wagon R did admirably well in the dirt but we went into ‘preserve-car mode’ when the going got really tough. We had to re-learn dirt driving. Chiclet was the first car to check into Manali, managing second overall behind Team Overdrive’s Esteem. Not too bad – army Gypsies (fully equipped with rally comps and roll cage) were behind!

Day Two
Manali to Jispa could have been a normal mountain drive, but the organisers made it a bit more interesting by adding a section from Gramphoo to Chotta Dhara (on the very rough road to Kaza). This was the toughest terrain in the Raid – gravel and rocks to huge boulders. We were amazed by the way the Wagon R acquitted itself. Earlier, a mismatch between our odo and tulip charts had seen us off course for a bit, and then a miscalculation of stage speeds by the organisers cost us some time. We’d slipped to fourth overall.

Day Three
Param had the hang of the TSD (Time Speed Distance) format now and we were managing decent times. We went thorough Baralach La and Nakee La passes The run through the Sarchu plains with its infamous dips and alien landscape was unforgettable, and the Wagon R was yet to miss a beat. We swapped our front tyres for a fresh pair at Jispa (we carried two spares) and that helped. We were sixth overall, with two days to go. Or so we thought.

Day Four
This day, while the Extreme competitors sat it out, we ran a shortened highway run to Tanglang La and back. Topping out at about 17,469 feet, this  is the third highest motorable road in the world. We hit a snow storm as we were reaching the pass and it was a sign of the things to come. The return leg was slippery, but we could still aim for a top-three finish. We reached Pang without trouble. The result sheet looked promising – barely a few seconds between third and sixth, us.

Day Five
This run back to Manali was cancelled and the now infamous ‘convoy to hell’ happened. Finally back in Mumbai having missing our train by two days, we checked the provisional results on the Internet and found we had finished fourth overall. That changed to fifth overall after an appeal from someone, and fourth among cars. That means a small trophy to park at home (the first five get trophies at the Raid), and a nice story to tell my grandchildren, over grilled chicken, someday.