Imports of truck and bus radials surged 57 per cent in the first two months (April-May) of this financial year.

What complicates matters for Indian tyre makers are the Rs 25,000 crore they spent in the recent past on capacity creation.

Data from the Automotive Tyre Manufacturers Association (Atma) shows the import of truck and bus radial tyres (TBR) during April and May grew to 280,000 units, compared to the 180,000 imported in the corresponding months of 2015-16.

In May, import of TBRs was 150,000 units, almost 40 per cent of the replacement demand for these in a month.

As the truck and bus tyre segment is the single largest category, 55 per cent of industry turnover, this “indiscriminate import and dumping” has a seriously adverse impact. 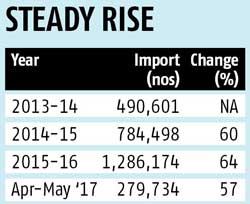 “There has been no let-up in dumping of tyres from China. Capacity utilisation levels in the industry have come down significantly over years,” said Atma chairman K M Mammen.

Atma alleges TBR export prices from China are significantly lower than the prices of such tyres in the Chinese domestic market, and the prices of similar export originating from  Thailand and South Korea. The per-unit import price from China is, in many cases, less than the cost of raw materials in India.

“Tyre manufacturers in India have made major investments to the tune of Rs  25,000 crore towards creating new capacities for manufacturing of state-of-the-art truck and bus radials, in view of rising radialisation in (this segment). The indiscriminate import and dumping are seriously undermining domestic manufacturing,” said Mammen.

The uptick in radial demand is in sync with an equal rise seen in demand for medium and heavy trucks and buses. This was 302,373 units last year, against 232,755 in 2014-15, according to data from the Society of Indian Automobile Manufacturers.