Racers upside down in bucket seats 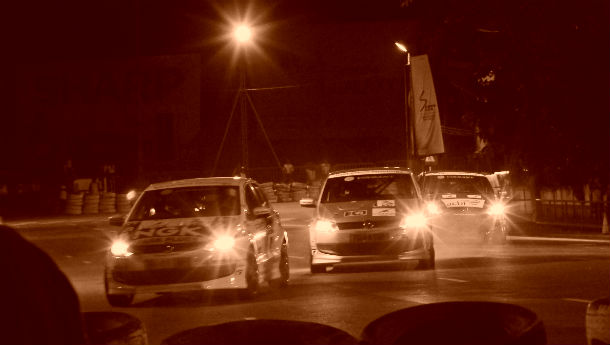 It seems like a completely random and rather bizarre thought, doesn’t it? In fact, it’s so random that I first think it must be the lack of sleep getting to me. Perhaps I’m seeing things because, well, it isn’t very often that you actually come upon a pair of racing seats placed flat on the ground, with a couple of racecar drivers sitting in them, back to the floor, knees bent, looking upwards like a pair of puppies dog-paddling. But it’s not lack of sleep that’s tricking me into seeing things.

You see, it’s 3am at the Colombo Night Races, and the contingent of Polo Cup racers from India is waiting to take to the street circuit for qualifying. Some have decided to go take a nap in their cars, others are sitting in groups trying to learn from the data they collected on their data loggers. While some more try to keep awake by pacing up and down. I’m drifting in and out of sleep myself, because there hasn’t been much going on on track for the last while. And the thoughts slowly start floating into my mind. What really stood out motorsport-wise in 2012.

1. F1 - the rise of the young guns
Yes, 2012 was the year in which Sebastian Vettel won his third consecutive F1 championship title. And it was also the season that saw Fernando Alonso dragging a battle-scarred prancing horse to grid positions, had it not been for his own skill as a driver, it would never have seen. But there were other stories up and down the grid as well - sterling drives from the likes of Pastor Maldonado and Sergio Perez that will not be forgotten in a hurry. And with Michael Schumacher retiring at the end of the season, it really does seem like the old order has most definitely passed. Mention must also be made of Kamui Kobayashi - he’s one gritty driver. And even though he might not be on the grid in 2013, we really are hoping to see him back in F1 soon! Whether you like it or not, Romain Grosjean could also prove to be a force to reckon with in 2013 - after all, he is Champion of Champions, no?

2. Sebastien Loeb - c’est impossible
What do you say about a man who has managed to win eight consecutive WRC titles on the trot? That he’s done it all, and even if you’re Seb Loeb’s most ardent supporter, you’re not going to say that you saw the ninth title coming at the very beginning of the season. Of course, this has nothing to do with Loeb’s talent as a driver. Instead it has everything to do with the fact that even for someone as fiercely fast as Loeb, sometimes luck must run out. There was also this other thought that crossed the mind every now and again - ‘How can one rally driver be just this good?’. Well, the answers to that we’ll never really know. Just like we’ll never know how many ‘k’s there really are in Juha, Tomi and Hannu’s last names.

3. Festival of Speed - finally!
I didn’t ever think it would actually happen. You see, ever since I managed to actively start following Indian motorsport, it’s been a tale peppered with warring factions and power struggles. But for a change, such matters were put to rest when the FIA GT1 Championship pulled out of its BIC commitments. The MRF Challenge and JK Racing Asia Series, which were to run as support races, came together with Sidvin to run the Sidvin Festival of Speed. Add the JK Tyre National Racing Championship and the Volkswagen Polo Cup and it turned into a motorsport extravaganza. What would have helped spectators, was screens with cameras and live timing, something to keep in mind for the next edition. There will be a next edition, won’t there?

Inroads abroad - yes please!
Yes, Narain Karthikeyan became the first Indian in Formula 1 in 2005. And Karun Chandhok had a brief stint in that very sport as well sometime in 2010. But there is more to motorsport than Formula 1, no? It’s been heartening to see Indian drivers make concerted efforts at other forms of motorsport - both two wheeled and four. Let’s start with Karun’s attempt at the World Endurance Championship, complete with a fifth-place finish at the 24 Hours of Le Mans. Not a bad showing, no? Then there was Jehan Daruwalla who took first place in the CIK KF3 Asia Championship. And while Sarath Kumar might have only managed one podium in the CIV Italian Road Racing Championship, the future is looking bright for the youngster. Why? Cause he’s gritty and determined. Good going, there.

And there’s more
If you want to learn to become a proper racecar driver, and have a bit of talent to go with it, there are plenty of options available. You don’t need to go, buy a car, prep it for a race and then cart it around from racetrack to racetrack. Instead you can now opt to either compete in the Volkswagen Polo Cup or Toyota Etios Motor Racing Series. If you’re talented enough and make it through the selection process, you can end up in a racecar for a full season. If you want to get the basics right you could start of with karting, with Indian Karting, Meco Motorsport or Rayo Racing who will show you the ropes. Then there are the motorcycle enthusiasts who can learn a thing or two about riding on track from the good chaps at Apex Racing. Options might be limited, but let’s just be glad that they’re there!

Got motorsport thoughts of your own with regard to the 2012 season? Feel free to write to us, we’d love to hear what you think.