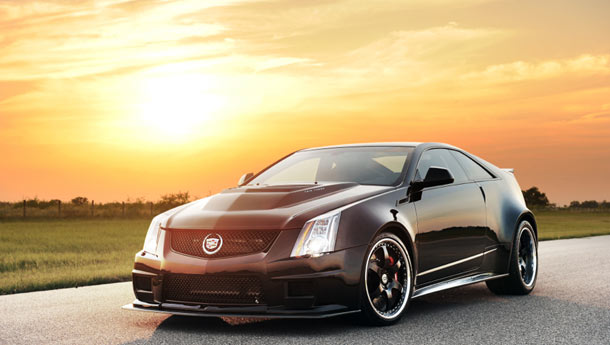 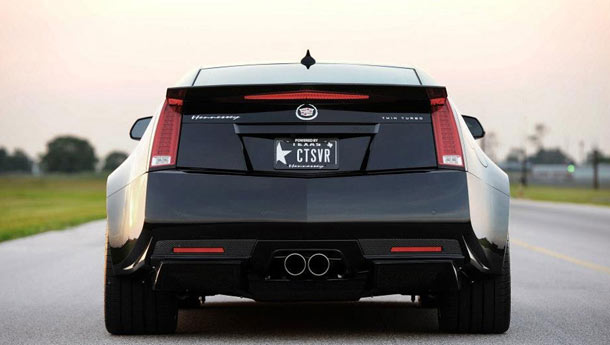 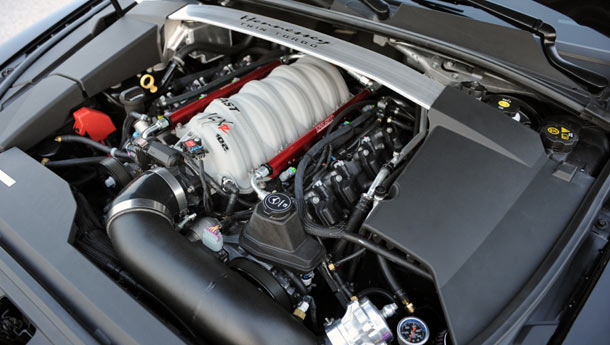 1200 horsepower. That’s a lot of power. Excessive, brutal, maddening power. The Bugatti Veyron Super Sport has that much and that’s the fastest car in the world. It wasn’t too long ago that tuner mags ran WRX STIs and Evos on their covers with big bold ‘500 Horsepower!’ headlines to go with it. This thing here doubles that figure and then some, in what seems like a very short period of time. The rate at which we’re heading north on the horsepower dyno, we shouldn’t be surprised to have 2000 horsepower as the norm within the next 10 years. But at least for now, the mad men at Hennessey Performance have come up with something that sits right on top of the automotive food chain. Or at least has a fighting chance to claim the top prize.

Props to them for choosing the right car to begin with - the wedgy, angular Cadillac CTS-V. It’s hard to make a car dressed in the automotive equivalent of a tux look any better but somehow, Hennessey has pulled it off. Armed with a whole bunch of carbon-fibre splitters and skirts - all-black, of course - they’ve turned the CTS-V into a wedgy missile that looks fast even when it's standing still. We would even go to the extent of saying that it looks a lot meaner than many of those power wagens coming out of Germany with stratospheric horsepower figures. I’m sure every rap star wants one to be parked outside his ‘crib’. But the VR1200’s looks are all but a teaser here - the real deal needs some prodding at the loud pedal.

The loonies at Hennessey junked the stock 6.2 V8 and plonked in a 7.0-litre V8 along with two turbochargers as big as houses. With a boost controller, you can set the power to either 800 horsepower, 1000 horsepower or if you’re absolutely sure you want to kill yourself, 1226 horsepower. With that sort of a nuclear powerplant under the hood, this Hennessey rockets to 100 kph from standstill in under 2.9 seconds and if you keep the throttle hammered in all the way, it will do a blinding 390 kph! Not as fast as the Bugatti’s 417 kph record but close. On a drag-strip, this tarmac-shredder will nail the quarter-mile in 10.2 seconds at 226 kph. Really, no one can appreciate the ferocity of what this car does without experiencing it. So, that’s why, Hennessey, we think its time you should let us have a go in one of these. We’ll be careful, we promise!