Pulling the plug on car brands 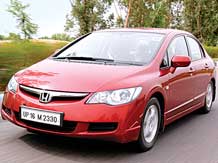 The pace of new launches in automobiles has been unprecedented in the last four-five years. We have seen the whole gamut: From the world's cheapest car (Tata Nano) to the most luxurious and bespoke cars (Rolls-Royce Phantom and Ghost). Both international and domestic carmakers have flooded the local showrooms with brands for as many segments as they can.

However, with a slowing economy, conservative consumer sentiment and mercurial fuel prices, companies are looking to tighten their belts. One of the ways for them is to get rid of defunct and slow-moving brands. Some of these car brands have been workhorses for their makers and have been around for over ten years.

Hyundai Motors India (Hyundai), the country's second-largest car producer has brought down the axe on the Accent, its first sedan for India. The Accent has been the flag-bearer of the Korean company in the mid-sized sedan segment for over 13 years.

Amid a completely revamped line-up in India, which sails under Hyundai's new design theme called 'Fluidic', the Accent was the only model which was not given a makeover. From its peak sales of around 3,500 units a month, six years ago, the brand sold an average of just 244 units per month last year.

With dealers trying to exhaust the stocks of the out-going brand, only 10 units of the Accent were sold in May, 2013, according to data provided by the Society of Indian Automobiles Manufacturers. However, Hyundai will produce the model for its export markets in Africa and West Asia where demand for the model is still strong.

Rakesh Srivastava, senior VP (sales and marketing), Hyundai says, "We launched the Accent in 1999; it was one of the largest-selling cars in its segment in the Indian market. The Accent has clocked a cumulative sale of 387,000 cars in the domestic and export markets".

Kiran Kothekar, director at Vector Consulting Group, which consults with automobile companies on their supply chain, says, "Manufacturers decide to pull out car models from production if their investments don't equal the revenue from sales. The numbers sold would have to fall dramatically for such a decision, and more importantly, the car company would have planned a new model that would cannibalise the sales of the withdrawn model further."

Srivastava says, "HMIL is a modern, premium product manufacturer, in line with the customer's aspirations. Phasing out the Accent will create space for bringing in new products in that segment in the future, to offer fresh value to customers."

Hyundai, though, is not alone in withdrawing car brands. The Czech car brand, SkodaAuto, has brought down the curtains on its entry-level car, the premium hatchback, Fabia. Launched in 2008, to rival the Maruti Suzuki Swift, the segment's bestseller, the Fabia has failed to return respectable sales.

A premium price-tag forced by a low level of localisation, limited market penetration, expensive spare parts and strong competition from the Swift, restricted sales growth of the Fabia. The best average monthly sales clocked by the compact car was in 2011-12 with 1,244 units. In comparison, the Swift consistently clocks sales in excess of 10,000 units a month.

Last year, the Fabia sold 3,343 units which makes for an average of less than 280 units a month. Competition from within also sounded the death knell. The sister brand, Volkswagen's Polo, which uses the same platform as the Fabia, clocks better sales at 3,000 units a month. Both the Fabia and the Polo used to share Volkswagen's plant in Chakan, Pune.

For the next few years, SkodaAuto will shift focus from the small car segment to mid-sized cars to maintain the premium brand value that it enjoys in the country. "Skoda is in the process of strengthening its model range, and as part of this process we are contemplating a pause in production of the Fabia in India", states a spokesperson in a report.

SkodaAuto had planned new small car to be positioned below the Fabia for India but it let go of the plan due to an internal shift in its parent, Volkswagen's strategy for India. The Volkswagen Group which owns the SkodaAuto brand, will focus on the sedan and the compact sports utility vehicle segments.

Honda Cars India, has made a comeback, from suffering due to a petrol-only product range, with the diesel-powered Amaze, to challenge the dominance of Maruti Swift Dzire in the compact sedan segment. But that has meant it had to discontinue the Civic and the Jazz (premium hatchback) to make room for production of the Amaze sedan, since the last financial year.

The Civic was made in India by Honda through assembly of imported kits. This meant a low level of localisation, leading to a high price. Moreover, the premium saloon lacked the advantage of a diesel engine, which was being readily offered in competing brands such as the Chevrolet Cruze, Hyundai Elantra and Toyota Corolla.

From nearly 6,000 units per month in 2009-10, the Honda Civic plunged to 685 units per month last year. Similarly the Honda Jazz, the largest hatchback ever to be on sale in India, and popular in European and American markets, was withdrawn from the market in March, 2013. The slow-moving model, based on the Honda City platform, lacked a diesel option. It was popular with afficionados but suffered from a mismatch in pricing and market demand early on in its career.

Honda replaced the Jazz with the Amaze on the production line in February, 2013. "The next-generation Jazz is planned to be introduced in India in 2014. The launch of new models in 2013 has resulted in changes to our production mix at our Greater Noida plant. Depending on the market response to the new models, we will keep the flexibility to make the changes in line with the demand," says a spokesperson from Honda Car India.

While poor performance has been the key reason for some manufacturers to pull the plug on ailing car brands, for others it has got to do with replacements.

However, the company did not replace the Chevrolet Optra premium sedan with another model. Instead, it chose to launch the new sedan Cruze, priced a notch higher than the Optra.