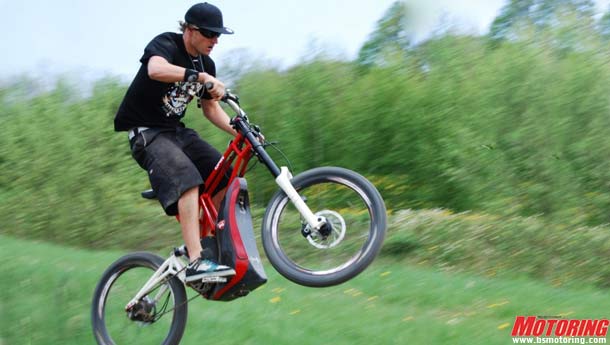 At the recently held Michelin Challenge Bibendum 2011 in Berlin, I had the chance to take this mountain bike hybrid you see in the picture above out for a ride around the historic Tempelhof Airport. It’s called the 3Element eSpire and it is one badass machine to have. Firstly, it looks like it will eat mountain cliffs for breakfast, lunch and dinner too. With top-notch components like the Marzocchi suspension, an aluminium trellis frame, Magura Julie (203mm F, 180mm R) and a slick Rohloff Speedhub with 14 gears, it probably will. That acts as the well-engineered base for a 15.3 kgm electric motor that can push the eSpire’s Fast version up to 45 kph. There’s also an off-road version (not street legal) which bombs along at 65 kph! Interestingly, that torque rating is almost equal to what a Honda City makes!

There’s a throttle but it only kicks in the motor when you’re pedalling. Not to worry, the effort is so minimal that with even 10% throttle, it’s barely any real pedalling. I could almost hear a ‘What? Pedalling?!’ behind me as I typed that. The removable 1200 watt battery pack fits nicely inside the frame and will push you along for up to 84 kilometers but that’s only on electric motor power. You can hugely extend your range if you pedal along as well.

It’s TUV-certified, has brilliant build and component quality but you pay for all this awesomeness as well. Through your nose. Brace yourself for this one - 7000 Euros in Germany. Rs 4.47 lakhs converted. Still, it’s a great start and surely the concept will get more affordable as time goes by. There is a possibility that you might shed off a few chubby kgs as well while you’re at it (if you cycle that is). You can already see variants of these hybrids on the Berlin’s roads and the concept is great. You think a more affordable, less-premium version will work in India? More importantly, will you buy one?