Prost gets me thinking 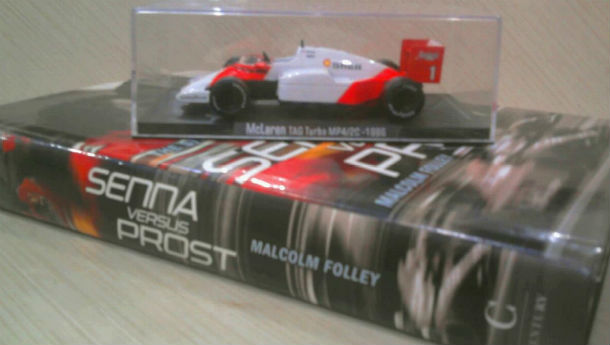 I reached the office the other day highly disgruntled - lots of rain, lots of stepping in puddles and getting splashed by passing cars while I tried to get to my parking slot. This was followed by a rather harrowing drive to the office because of slow-moving traffic. Finally though, somewhat damp and with many ruffled feathers, I reached my desk at the office and had good reason to smile. You see, sitting there, glinting in the light was something I’d long dreamed of. It was the McLaren MP4-2C - a scale model of course - the car that Alain Prost had piloted in to his second Formula 1 world championship title in 1986. The day might have started out on a rather insipid note, but then things took a turn for the better and it was all thanks to a little red and while Marlboro-liveried scale model.

Indeed, credit must be given where it is due, and it is Rohin I have to thank for this wonderful surprise. He’d managed to find the scale model for me when he stopped by at the Goodwood Festival of Speed. It was there that he also met the man who piloted the car we speak of. Kind soul that he is, he even got him to autograph my copy of Senna vs Prost. Not only that - he asked him many a question, and you can read the full interview in the August 2012 issue of BSM. Just listening to Rohin talk about meeting someone as legendary as Alain Prost, party to what is possibly Formula 1’s most iconic rivalry, left me with goosebumps and I’m sure you’ll feel the same way once you read his story, so do look out for it. Shameless plug, you say? Guilty as charged!

On a more serious note though, Prost has always been one of the major champions for safety in motorsport, much like Sir Jackie Stewart, Niki Lauda and Jacky Ickx. And while the cause they championed those many years ago has certainly made motorsport a lot safer than it used to be, the emphasis on safety can never be enough.

At the 24 Hours of Le Mans this year, Anthony Davidson’s Toyota suffered a crash when the Ferrari 458 Italia from the GTE-Am category, piloted by Piergiuseppe Perazzini tangled with his car. While Perazzini escaped unhurt, Davidson suffered two fractured vertebrae. That was a racing incident that you cannot avoid I suppose, if you have amateurs and pros on the same grid. But now comes the news of Maria De Villota’s accident while completing a straight-line test session for the Marussia team. Latest updates reveal she has lost her right eye in the incident, likely to be a career-ending accident. Another case for closed cockpits? And closer home the motorsport fraternity is coming to terms with the tragic deaths of Jatinder Shukla and Ashish Mahajan who lost their lives after an accident in the Mughul Road Rally.

‘Motorsport is dangerous’ - the disclaimer shouts out at you from every badge you’re handed at any motorsport event. And while it’s impossible to entirely remove the danger from the sport that we all know and love, steps must be taken to ensure that it is reduced. Adequate provisions for ambulances and helicopter services must be provided. And unsafe motorsport practices should quite simply be boycotted - a move that is no doubt difficult especially if one has invested time, effort and money in an event. But unless people take a stand, things aren’t going to change.

Perhaps we could take a leaf out of Jacky Ickx’s book. He famously boycotted the Le Mans start at the 1969 edition of the 24 Heures du Mans. Instead of running towards the car, climbing in and zooming off, Ickx walked slowly across the grid, deliberately belting himself in carefully before setting out. Ickx eventually won the race and also proved a point for safety - a fellow competitor lost his life on the first lap of the race itself, because of an improperly fastened belt. From 1970, the Le Mans start was banned.

Safety first. A point that cannot be stressed on enough, especially when it comes to Indian motorsport. Things will only grow from there.