Except Mahindra & Mahindra (M&M), which saw a marginal decline in net profit last year and was impacted by factors such as declining tractor sales and actions against diesel vehicles, all others have reported better profits. Accordingly, most except M&M announced a higher dividend for shareholders. M&M kept the dividend unchanged at Rs 12 a share.

A higher dividend announcement following better financial performance is meant to reward shareholders. Promoters, who are often majority shareholders, end up gaining as well. Take the case of Eicher Motors, better known for the country's fastest growing motorcycle brand Royal Enfield. The company decided to double the dividend payout to Rs 100 for FY16. Obviously, this was on the back of a 100 per cent growth in profit to Rs 1,230 crore.

The Lal family, with its 55 per cent stake in the company (as of March 2016), is estimated to have got Rs 149 crore as dividend income against Rs 74.51 crore in the previous year.

The auto industry has seen a recovery of sorts in FY16. The passenger vehicle segment - cars, vans and utility vehicles - posted a volume growth of seven per cent. The commercial vehicle sector grew at a double digit rate of 11.51 per cent. Only the two-wheeler industry struggled to grow volumes. Here, too, benign raw material prices helped companies to report better profits. 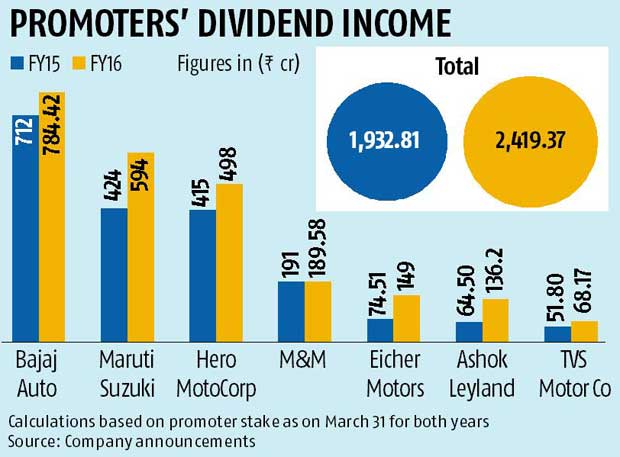 Similarly, the Hindujas - promoters of Ashok Leyland - doubled their dividend income to Rs 136 crore in FY16. The commercial vehicle major announced a dividend of Rs 0.95 a share against Rs 0.45 for FY15.

Significant gains in dividend income were seen in the case of Maruti Suzuki. With a record profitability in FY16, the company announced dividend of Rs 35 a share - 40 per cent more than that of the previous year. Japan's Suzuki Motor Corp, which owns 56 per cent in the country's largest car company, will get a dividend income of Rs 594 crore compared to Rs 424 crore in the earlier year. The growth from Indian subsidiary comes at a time when Suzuki's home market, Japan, is under pressure.

"The management of companies that do not have a debt and have only minor capex, should announce higher dividends and also adopt a clear policy for dividend."

The Bajaj and the Munjal families, who run two of the country's most valued two-wheeler companies, will also be entitled to bigger dividend income. The Bajaj family, promoters of Bajaj Auto, will get Rs 784 crore in dividends from their 49 per cent stake against Rs 712 crore in the previous year. The Munjal family will be entitled to Rs 498 crore in dividends against Rs 415 crore.