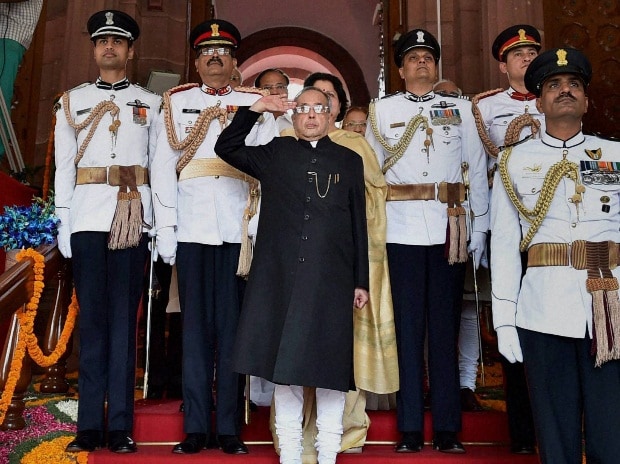 President Pranab Mukherjee’s address to a joint session of Parliament, his first since the Narendra Modi-led government took charge, on Monday unveiled the Centre’s five-point agenda, largely economic. While boosting economic growth in the medium term and inflation control — especially food inflation, through supply-side reforms — were highlighted as the key concerns, improving governance, building core infrastructure and reviving the agricultural sector came across as other focus areas.

To boost manufacturing, the government would set up investment and industrial regions, particularly along dedicated freight corridors, he said. These are likely to be on the lines of the Gujarat International finance Tec-city (GIFT) and the Dholera Special Investment Region in that state. An ambitious 10-year infrastructure development plan will be drafted and a quick, investment-friendly and predictable public-private partnership mechanism introduced. Within infrastructure, the focus will be on modernising and revamping the railways, the Diamond Quadrilateral project (high-speed trains), a network of freight corridors, port development and interlinking of rivers where feasible.

The President’s speech did not touch on the public finance issues flagged by economists as an area for concern and did not mention how the government was going to cut subsidies or raise or rationalise taxes. But it promised to take state governments on board by addressing their special and unique needs, rather than centralised planning.

There was a measured mention of foreign direct investment to be allowed in the sectors that help create jobs or assets and in defence (for greater indigenisation).

On the social-sector front, the President said in his speech that the government was committed to setting up one Indian Institute of Technology (IIT) and an Indian Institute of Management (IIM) in every state, besides massive open online courses and virtual classrooms. A National Education Policy aimed at meeting the challenges posed by the lack of quality, research and innovation in Indian educational institutions will be formulated. A new health policy and a National Health Assurance Mission (which will have yoga as its core), were also promised. Those belonging to the scheduled castes and other backward classes would be empowered to avail of emerging opportunities, the President said. “For the scheduled tribes, the government will launch a dedicated Van Bandhu Kalyan Yojana. Electrification of tribal hamlets and connecting them with all-weather roads will be a priority area.”

Thought the speech mentioned the national e-governance plan would be expanded, it was silent on ‘Aadhaar’. It said a veterans commission (to address problems of retired soldiers) and a national maritime academy would be set up.

“A policy of zero tolerance to terrorism, extremism, riots and crime will be pursued,” Mukherjee said. The President also said states would be assisted in modernising police infrastructure and equipment to tackle new forms of terrorism, including narco-terrorism and cyber threats. “A national plan will be chalked out in consultation with the state governments to effectively curb incidents of communal violence and the challenges posed by left-wing extremism.”

SETTING THE STAGE
Highlights of the govt’s projects and policies, as outlined by the President’s speech

Water resources: Considering all options, including inter-linking of rivers, to ensure optimal use of water resources

Education: Setting up an IIT and an IIM in every state; formulating a national education policy

Railways: Modernisation of railways; a project for high-speed trains; push for investment through innovative financing methods

IT boost: Use of IT to drive govt processes and improve service delivery & programme implementation

Taxes: Simplification of tax regime to make it non-adversarial and conducive to investment; bringing GST after taking states on board