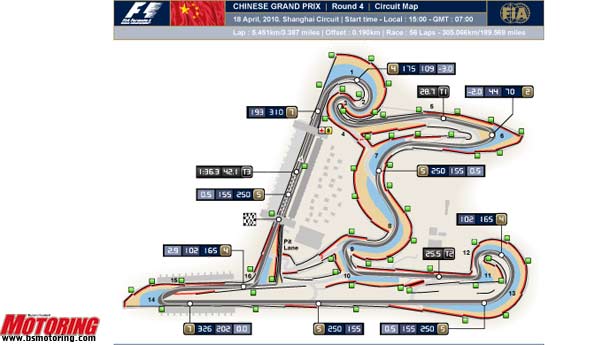 The Chinese Grand Prix at the Shanghai International Circuit enjoys the unusual distinction of having had a different winner for each of its six editions. And five of those six winning drivers – Rubens Barrichello, Fernando Alonso, Michael Schumacher, Lewis Hamilton and Sebastian Vettel – will line up for this year’s seventh Chinese Grand Prix aiming for their Shanghai double.

The SIC, located 30 kilometres north-west of China’s dramatic business capital, joined the FIA Formula One World Championship in 2004, and its grand scale and ultra-modern architecture immediately identified it as a truly 21st-century Grand Prix venue. Designed by Hermann Tilke, SIC has the capacity for 200,000 spectators – 29,000 of them in the main straight grandstand alone – making it a Formula One facility of high ambition. Located in Shanghai’s Jiading district, SIC forms the centrepiece of an area earmarked for development as an ‘Auto City’.

CHANGES TO THE CIRCUIT SINCE 2009

• Drainage has been improved in the areas most affected during the race last year.

• Two sections of the Shanghai International Circuit have been nicknamed ‘snails’, owing to their curling shape: the first at turns 1, 2 and 3, has a closing radius, while the second, at turns 10, 11 and 12, has an opening radius.

• SIC deliberately mixes traditional with modern: the team offices built on stilts above a lake echo the water gardens in Shanghai's

Yu-yuan garden, while many of the circuit’s buildings feature the red and gold of the Chinese flag.

• The circuit and all its buildings were constructed from scratch in 18 months. The site was originally swampland, requiring 40,000 support piles between 40 and 80 meters tall to be sunk, in order to provide secure foundations. A layer of polystyrene topped off the concrete sub-structure – a requirement so vast that the entire available Asian stock of polystyrene was purchased, to facilitate construction.