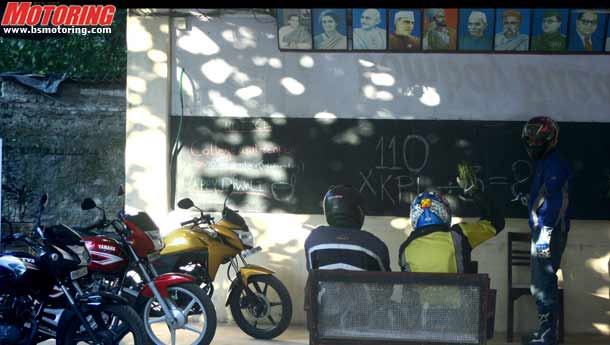 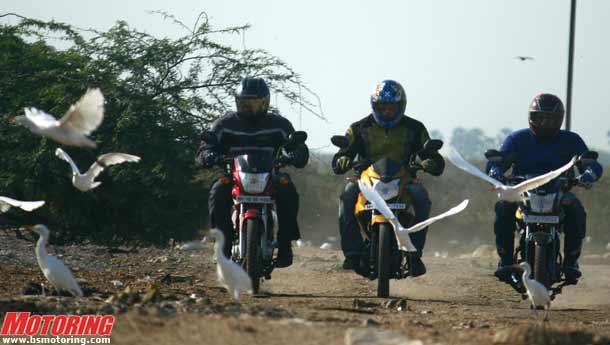 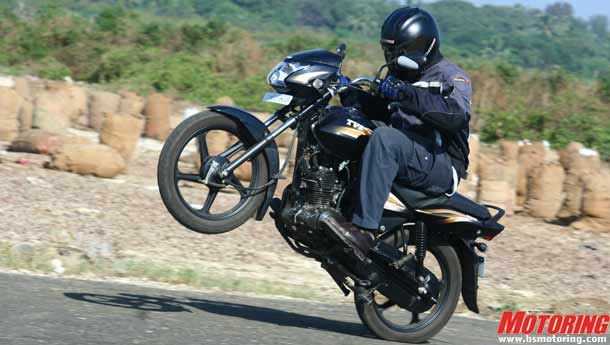 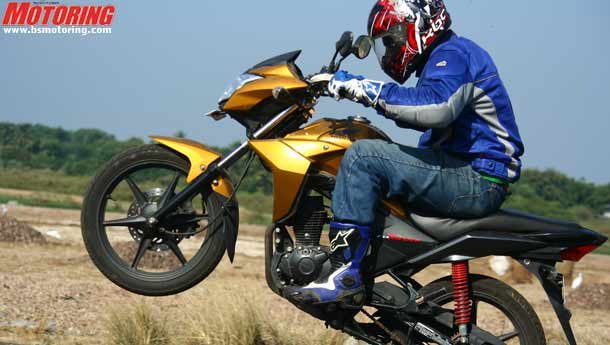 The YBR 110 is not much different from the Alba, save for the graphics and the name. As manufacturers across the world run helter-skelter developing new motorcycles to entice motorcyclists, we in India get reworked stickers. And model names. Sigh.

Now, the Alba wasn’t a bad motorcycle. It handled well, had a refined motor and the looks, while not exactly cracking good, were conservative and hard to point a finger at and laugh. So obviously, the YBR 110, being the exact same thing, is the exact same in those respects. The problem is, it wasn’t developed further at all. Another department that the YBR lacks in are the motorcycle’s brakes. The braking could have been better – the rear locks the wheel, while the front stopper is as sharp as a slab of butter. It desperately needs a disc and I’ll go on to say that all motorcycles deserve one at the front at the least. Sure, manufacturers feel that cutting corners with the brakes is a great way to cut costs, but at what costs, I wonder.

The Jive is clearly the underdog of the trio. On the fun to ride quotient, the Jive is right up there with the Twister (Yeah, right – Kartik). It’s a handsome motorcycle, if somewhat pint-sized, but with time, the looks will blend into the scenery. It’s easy to dismiss the Jive as just another commuter, especially when it’s up against the Twister. But get on it, and in true TVS fashion, it’s a surprise performer. The engine is responsive, and though the numbers deny it, it ‘feels’ quick. In character, the Jive reminds you of the Victor. It is solid, compact and an eager performer.

Downshifting without a clutch is a craft you’ll have to master over time. Every time you downshift, you get massive engine braking and a little chirp from the rear tyre. The plus is that you can coast to a halt in fourth and the Jive won’t stall. But since our kind of traffic doesn’t always allow us the liberty of sticking to one gear, this may be a bit of an irritant.

The riding position is good for about an hour, but if you have longer to go, you’ll really have to go for the XXL-sized YBR, the most comfortable of the trio. Also, the ‘bars and pegs get vibey as the revs go higher – dislike! Switchgear is well finished, everything falls to hand easily and you get electric start and a headlamp that runs directly off the battery (a segment first, I think).

The Twister is the hot blonde of the commuter club! It grabs your eyeballs and pulls at your heartstrings even before you’ve touched it. Whereas commuters tend to be bland-looking, the Twister is most certainly the rebel in its segment. It even looks better than many bigger bikes and costs substantially less, and that’s a big selling point. But that’s not all.

This little motorcycle has got the substance to back up its looks – it’s the quickest and fastest of the trio. A torquey 109cc motor that’s smaller than my head, relatively shorter gearing, a 108-kg kerb weight and the sportiest riding position in this bunch means that the Twister is almost too much fun to pilot through traffic. Indeed, given its asthmatic top end, I always want to be in traffic when I’m riding the Twister!

Honda claims a 70 kpl figure for the Twister. You might even match that if your commute is arrow-straight smooth tarmac with no traffic and you never go above idle in top gear, but in the real world with BSM staffers ridng it, it doesn’t work that way. Subjected to the generally loony riding that moronic... er, motoring scribes are known for, the Twister returns between 50-55 kpl. That’s with the motor at higher-than-medium revs in top gear, with the suspension and agile handling getting me through/over everything.

Now to the money. The top-spec Twister retails for ` 52,559, ex-showroom, Mumbai, and that’s a lot more than the YBR or Jive. But you get superb looks, tubeless tyres, and more importantly, a front disc brake. Value for money? Hell yeah! Plus, the Twister comes with the added satisfaction of leaving bigger bikes behind in traffic. That does it for me. And some gentle bullying later, that’s enough for Kyle and Ruman to agree that the Twister is, quite rightly, the winner here.