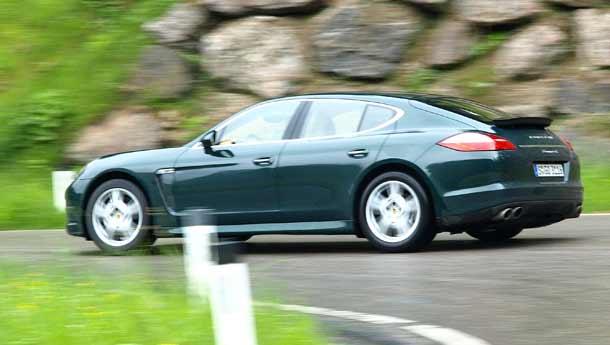 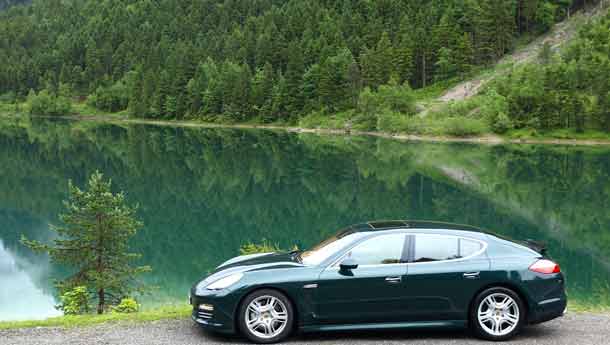 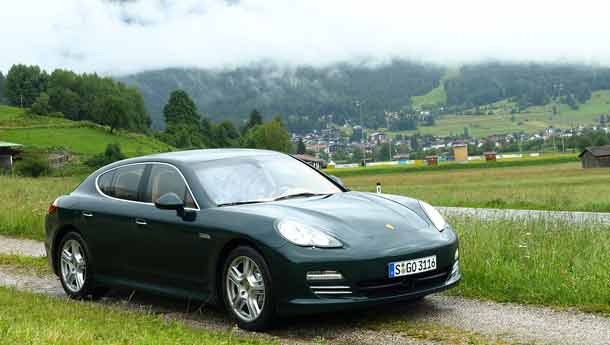 This is a Porsche story, so let's cut to the sex, as it were, and reveal the most fun part first. Take one number Porsche Panamera Turbo, equipped with the optional Sports Chrono package. Add a dash of deserted road, with perhaps an admiring onlooker or two standing well clear, and attractive company in the front passenger seat. Select 'Sport Plus' mode on the selector console. Bury the gas pedal with your right foot, while simultaneously standing on the brake with your left. Hear the 500 bhp V8 yell its guts out for a couple of seconds, and then watch as the 'Launch Control' sign appears on the dashboard. Take a breath and let go of the brakes. Whoop and holler as the Panamera squats, digs all four Michelin Pilot Sport PS2s into the tarmac, lifts its considerable nose and blasts down the road, hitting 100 kph in 4 seconds dead. For best results, repeat – as many times as you like. Yup, because according to Porsche, their launch control system is less clutch-destroying than a rapid start with a manual gearbox. That's an immediate plus straightaway over, say, a ballpark competitor like the BMW M5, in which indiscriminate use of launch control will deep-six your warranty. A good start, then.  Unless you've been taking shelter under a substantial rock for the last few years, you will know that the Panamera is Porsche's first production front-engined, four-door, four-seat saloon. It's been the subject of intense debate and speculation since the day it was first announced, and spy pics/CG-imaginings have done the rounds virtually from day one. It was unveiled to the world at the recent Shanghai motor show, and reactions have been mixed. Purists and Porsche devotees have wrung their hands in despair, while the rest of the general public has displayed emotions ranging from mild curiosity to outright incredulity. Just like the aftermath of the Cayenne launch, then, and perhaps it's only fitting that the Panamera borrows its engine from the biggest Porker out there. The Cayenne went on to become Porsche's hottest seller, so the question is whether the Panamera can replicate that success.  First impressions really are everything, and upon exiting Munich's swanky new airport, I must admit that the sight of a Porsche tent with brand new Panameras lined up alongside made me stop in my tracks. It wasn't so much because the car itself was a ravishing beauty – it was just the sheer novelty of seeing so many in one place. Now, it wouldn't have been rocket science for Porsche to go with a traditional three-box architecture for their saloon, but then they've always done their own thing. In this case, the Panamera had to seat four passengers in sybaritic comfort, it had to fit most of their luggage in the boot and it had to do all this and still be a low-slung sports car. Don't get me wrong – the Panamera looks like a Porsche from a mile away. The only thing is, it looks like a Porsche that was the end result of a very complicated tryst involving, among other parties, a Chevrolet Corvette, a Porsche 928, a Cayenne and a Chrysler Crossfire. The Porsche touches – a rippling, muscular shoulder line, raised front fenders, the swept back headlamps – are all there; it's just that they've been articulated in a manner that's very new, and will perhaps take some getting used to. Still, the Cayenne flew off the shelves, so...   This is a Grand Turismo, which means that the Grand Turistas inside it need to feel like they're in an automotive version of the Ritz-Carlton rather than the Roach Motel – in this aspect, Porsche have done the Panamera proud. Open the doors and the seats immediately strike you as classic Porsche, with their tapered back rests and integrated head restraints. They're all extremely comfortable and supportive, and almost endlessly adjustable. There's a real sense of style and substance in the cabin, and every little bit reeks of the very highest quality and finish. There's a combination of fine leather, wood, carbon fibre and aluminium inside (depending on the model), and the centre console looks exactly like the face of a Vertu cellphone – I'm sure that was unintentional, but it lends the car an extra touch of exclusivity. The sheer number of buttons is a bit overwhelming, however. Even though they're arranged into zones such as climate control, suspension settings, vehicle settings and emergency functions, they're not especially intuitive to use right from the get-go. The gear lever is a real work of art, machined to such an exquisite finish that it's fit for a modern art museum. There's options such as four individual climate zones (one for each passenger), sports seats and, if the already outstanding Bose audio system isn't enough, there’s always the mind-altering Burmester audio system that will blow your socks off (the Veyron comes with one, by the way).

At the end of the day, though, the audio system can go hang. If you're in the market for a Panamera, you're the sort who values the driving experience over all else, so let's get on with it, shall we? The Panamera's engine is based on the 4.8-litre V8 lurking under the Cayenne's hood, but the-all aluminium engine's been worked on for the saloon. It gets direct fuel injection, and a one-sided variable camshaft management system, with adjustable valve lift. In the S (rear wheel drive) and 4S (all wheel drive), the engine makes 400 bhp at 6500 rpm, with a tyre-shredding 51 kgm of torque between 3500 and 5000 rpm. Now, I drove both these cars and they're not exactly three-toed sloths – the S hits 100 kph in 5.6 seconds and the 4S in 5 seconds. However, like I said earlier, the real fun is to be had with the Turbo – if you can argue with a twin-turbocharged V8 producing 500 bhp at 6000 rpm and a completely mental 71 kgm of torque from 2250-4500 rpm, you deserve to win debates even before they've begun. The Turbo I was driving was the all-options ticked version – Sports Chrono package, adaptive air suspension in addition to the standard Porsche Adaptive Suspension Management, Porsche Dynamic Chassis Control, Porsche Traction Management, ceramic brakes, Burmester stereo and (honestly) God knows what else. The engine settled into a civilised growl, with plenty of hidden menace in evidence – there was no doubt this car would happily maul me if I was impertinent with it.  With the suspension set to 'Comfort', I made my way out of Munich, with the GPS on the 7-inch, hi-res screen on the dashboard giving me directions in clipped English. At low speeds, the steering seemed a little over servo-ed, but it weighted up nicely as I speeded the car up. The car was a doddle to drive in traffic, despite its considerable length and width, and the suspension setting lent it a typically German-luxury-sedan ride quality. I was a bit startled when the engine cut out at the first traffic light I encountered, but that was just the Auto Start-Stop kicking in. With the car at a dead halt, and your foot on the brake, the engine switches itself off, and starts up very quickly when you release the brake pedal.  On the speed-restricted sections of the Autobahn, I cruised with all the settings at 'Comfort' and 'Normal' at a steady 140 kph, and the Panamera was every inch a luxo-barge – quiet, very comfortable inside and with a plush quality of ride. I could feel the PASM at work – even in 'Comfort' mode, the suspension (an aluminium unit, with a double-wishbone arrangement in front and a multi-link setup at the back) would automatically become stiffer whenever I did a lane-change at fairly high speeds, thereby aiding steering and manoeuvrability. A colleague from the journalistic fraternity, sitting at the rear, reported that as a back-seat car, the Panamera was the business – plenty of leg-room, plenty of comfort, plenty of goodies to fiddle with and a feeling of complete satisfaction and well-being. For a car that's technically up against the S-Classes and 7 Series' of the world, that's good news.   Once I hit the unrestricted section, I dispensed with the niceties. Selecting 'Sport Plus' on the PASM, I increased the engine's exhaust note (yes, there's an optional feature that lets you do that) and put pedal to metal. The Porsche-Doppelkupplungsgetriebe (I challenge you to pronounce that in one try) or, simply, the double-clutch automatic gearbox, which had been leisurely keeping the car in 7th gear, immediately dropped revs and shot us forward, with a delicious snarl from the engine. The car became absolutely ferocious – every time the engine hit the redline, it shifted almost instantly and brought itself back into the powerband, revving hungrily back up the tachometer. The ride became firmer, the adaptive air suspension lowered ride height by 25 mm, the car seemed to shrink around me and, not for the first time, I got the feeling I was driving a 911 with four doors. With almost ridiculous ease, I found the speedo reading 290 kph, and I was perfectly prepared to believe Porsche's claim of a 303 kph top whack. By now I was passing the rest of the cars on the Autobahn as if someone had pressed their 'Pause' buttons. Even a couple of 911s saw me coming and stepped respectfully aside – I kid you not. This is where the Panamera trumps its on-paper competition – show me a stock S-Class or 7 Series that provides this sort of visceral driving pleasure. Oh, and before I forget, the ceramic brakes (16.1 inch rotors at the front and 13.8 inches at the back) provide the sort of stopping power that would pitch you through the windshield if you weren't strapped into your seat. There wasn't a sign of fade from them throughout my drive, despite some hardcore braking from speeds upwards of 220 kph.

Off the Autobahn and onto some spectacularly picturesque B-roads, it was time to hustle the Panamera a bit. The skies had just opened up, so I wasn't about to go ten-tenths on those narrow, wet roads for fear of landing in a ditch. Still, as I pushed harder at every corner, the car exhibited an almost 911-like ability to take it all in its stride. Direct, responsive steering, an encouragingly neutral attitude around corners and a willingness to be driven harder and faster were very much in evidence, and it was only when I gave it some ill-advised mid-corner gas that a wheel would snap free and start to slip sideways on the wet roads. The traction management system would step in, correct matters and slap me on the wrist at this point, wagging a finger at me and sighing as I did it again a few corners later. Hey, this is a Porsche – I had to have some fun, right?  When I finally stepped out of the car 160 km later at the hotel we were staying at, a couple of things were clear in my mind. The first was that as a GT, the Panamera succeeds, and succeeds big. It would be difficult to find a similar mix of luxury and focussed driving pleasure in any other car in its class, especially if you're driving the Turbo. Sure, the way it looks will be a drawback for some, but those misgivings are likely to cast aside as soon as they get behind the wheel. The word in India is that there's been a lot of interest in the car already, with talk of several bookings already having come in, especially for the top-end 4S and Turbo models – and this is before the approximate launch date of early October. As of now, its only real competition is the soon-to-be-released Aston Martin Rapide which, frankly, blows it away on the looks front. The second thing was that I wanted to drive the car a whole lot more, and the whole of the next day had been set aside for bombing around the Bavarian countryside. Perfect.