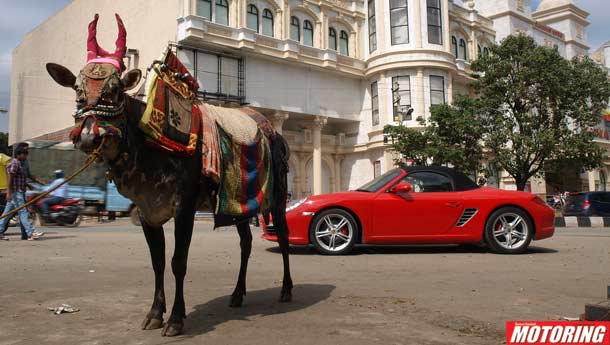 One way or the other, I seem to have become some sort of a Porsche specialist, over the last few years. I'm not complaining, mind you - nobody in their right mind would, if given the opportunity to drive some of the best sportscars in the world. It all began way back in 2004, if memory serves me right, when we drove and shot the Boxster, with me and my then girlfriend featuring rather prominently in the photographs. Not long after that, Srini and I tried to replicate Deepak Tolani's shoot of an older 911 with the new model, near the Gateway of India (this was pre-terrorist attack Mumbai, when such things were still possible). I'm not sure if I managed the photo shoot as well as Deepak did, but I did get to blast the 911 up and down the road near the Taj Mahal hotel, much to Ashish Chordia's (the head of Precision Cars, importers at the time) quiet concern. The brief moments that I spent in the Boxster and the 911 had me hooked - I became an instant Porsche fan (although I really couldn't tell one model properly from another, since they looked so similar).

My most memorable Porsche experience came about a year later - the fabulous 356 appeared in our pages, and the car was just something else. It was in absolutely showroom condition, and to see and hear one of the greats being driven on Mumbai's roads was an experience I won't forget in a hurry - an image of the car's silhouette against the early morning sun still remains burned into my memory.

The years passed and more Porsches entered my life - the previous generation base 911, driven from Zuffenhausen to Munich and back, started things off, in the sense that it was the longest drive I had yet done in a Porsche, which allowed me to really get a feel for what driving a 911 means. The Panamera was launched not long after that, and I found myself back in Munich, driving from there into Austria and back. Sure, it looked a bit, well, odd, but it went like a proper Porsche and it handled too - the Turbo, especially, was a pack of dynamite in the guise of a luxury saloon. The Panamera led to the 911 Turbo S Cabriolet (driven on Jebel Hafeet, near Dubai) which was a nuclear weapon in the guise of a sportscar - it mauled the 0-100 kph run in 2.9 seconds, scared the hell out of me and the friend I'd taken along for the drive and left me wanting to drive its wheels off for as long as I possibly could.

The new Boxster was next, again in Germany, and one thing was immediately clear - it remained the best roadster on the planet, and one of the best cars on the planet, period. Very few people will need more than the power, handling and sheer thrills that it delivers, and if I had to buy a car, any car, the Boxster would be high on my list, even though my bank balance would laugh at me. On the same drive, I also sampled the Panamera diesel (a bit dull, but a Porsche nevertheless), the Cayenne S and, most interestingly, the latest 911 Cabriolet, with the new 7-speed manual gearbox.

I love cabriolets of all sorts, so it wasn't surprising that I thoroughly enjoyed the new one. I really don't know how Porsche manages to make each generation of 911 noticeably better than the last one, but manage it does, and I'm thankful for it. The 7-speed 'box is a joy to use, with cogs 1 to 6 having short ratios and number 7 being satisfyingly wide, and purists the world over will probably be wetting themselves in delight when they use it. Or maybe not, because magnificent as it is, the optional PDK unit is better in every way. Nevertheless, whether you choose the manual 'box or the PDK, the new 911 Cabriolet provides an exhilarating,  joyful and rich driving experience, being both civilised as a daily driver and astonishingly fun to drive when you decide to let it all hang out - Porsche has done it yet again. Now for that 918...