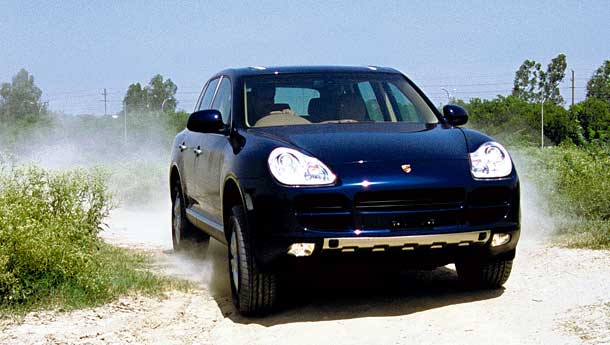 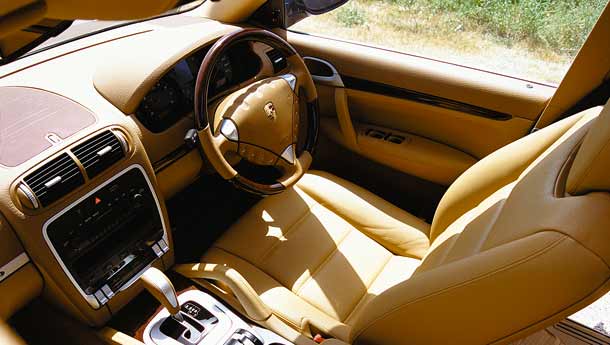 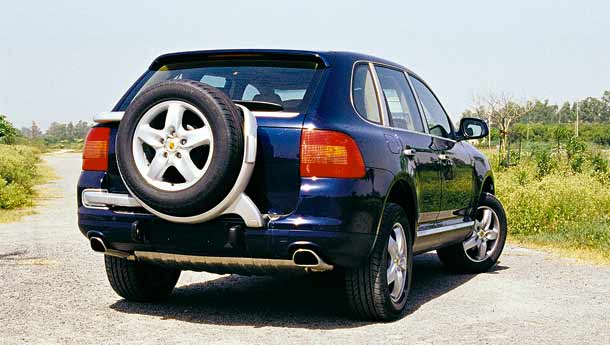 ‘There is no need to use all of the car’s speed on every journey. At low speeds, even on a motorway, a Porsche should offer a rewarding driving experience’ – Professor Dr.-ing h.c Ferdinand Porsche, 1989.

‘So, can I drive the Cayenne?’, ‘Of course you can, but it will be a V6, is that all right? I thought about it for a nanosecond – not that I really had a choice. Given a chance, I would be blasting across the Sahara in a 450 bhp Cayenne Turbo or trundling down the Cote d’Azure in the Cayenne S. ‘Hello..,’ the voice on the other side was getting a bit impatient. ‘Of course,’ I said, ‘I want to drive the V6 and I will reach the showroom at eight sharp.’ Overnight, I studied the spec sheet. The Cayenne Turbo does a 0 to 100 kph sprint in 5.6 seconds, the Cayenne S does the same trick a second later at 6.8 seconds and ahem, the car I was about to drive, manages this in 9.7 seconds.

So what’s it with just four seconds, you may ask. Actually, quite a lot when you are talking Porsche’s language. But then, even Porsche had to have an entry level SUV and there was no way they could get a diesel engine into their lineup. True, Alfas and Beemers can drink the stinky, sticky fuel, but Porsche aficionados would commit mass suicide if the high priests of Zuffenhausen ever decided to fit the Porsche crest on what would essentially be a VW diesel engine – which they have in V10 guise, fitted under the hood of the Cayenne’s twin sister, the Touareg.

So essentially, the Cayenne (as the V6 version is simply called) is an adequately powerful version of the big Porsche. The V6 motor displaces 3200cc to develop just about 250 bhp at 6000 rpm and 31 kgm of torque between 2500 and 5500 rpm. It all sounds good till someone tells you that the Cayenne Turbo has 450 stallions and the Cayenne S comes packed with 340 bhp under its hood. Sigh!   At eight in the morning the next day, I reached the dealership. There, inside the showroom, was a blue whale of a machine. The cobwebs of power and torque figures were cleared immediately by the sheer size of this automobile. It is one thing to make comments after seeing the Cayenne in a photograph, but viewing it in the flesh, I had trouble closing my mouth. Some time ago, while in college, I did try to sketch an imaginary Ferrari-built SUV and clearly remember that the result looked very similiar to the Cayenne (and I thought I would never become a Giugiaro in my life and quit sketching cars).

So in the Cayenne, you get the familiar 911 snout with wraparound head lamps and those huge air intakes made popular by the last generation Turbos. Then you realise that the car has considerable ground clearance, and soon it dawns on you that this is not a car at all. Viewed side-on, this slab sided Porsche is pure function and zilch form and echoes the ‘massive-sedan-on-steroids’ look that is bound to go down well with the Americans.

Let us admit it, it is difficult to make SUVs beautiful since usually their ancestors are brutal war veterans. Yet, I have to say that this Porsche manages to look handsome from most angles – a bit ‘healthy,’ but nevertheless handsome. The interiors are a blend of the conventional and modern, and overall a bit of a compromise for a Porsche. There wouldn’t have been ample space for five in a Porsche had they not shared the platform with VW – and in the Porsche application, space is crafted well with beautifully stitched leather and plush carpeting. What was slightly disappointing though was the quality of the plasto-aluminium bits. These would be just about okay in a Rs 200 Chinese toy, forget a German car. The test car had the ‘light-olive’ pack interior colour theme but my personal favourite is the dark-walnut package, involving two shades of gray in contrast with rich walnut veneer. The three spoke steering wheel is typically Porsche and the test car came with the famed Tiptronic controls on the steering wheel.   This is a very civilised Porsche and you get the first inkling of it when you turn the key. The V6 whispers to life – no supercar bark, throb or cacophony here. Slot the auto box to D and the car glides out of the driveway into traffic. The ParcAssist system was a bit of nuisance in Delhi traffic (it kept on beeping even for pedestrians who came close to the car) and I really wanted to switch it off. As the traffic cleared, I could floor the throttle and get the two-tonne beast moving at a pace that suits a Porsche. On the move, the feedback from the wheels was detailed and direct, which somewhat compensated (in a strange way) for the lack of turbo grunt. The Cayenne’s power steering with a variable ratio ensures that driver inputs are transmitted to the road with an eagerness that even 911 drivers would appreciate. Servotronic speed sensitive steering is an option for all Cayenne models.

After blasting across a newly constructed fly-way in the outskirts of New Delhi at strictly illegal speeds, we came across a bit of terrain where I could test the intelligent four-wheel drive system. The Porsche Traction Management system ensures that all the available torque is distributed from the engine to whichever wheels that need it most. Essentially, this is a four-wheel drive system with a lockable centre differential that ensures a 38 to 62 front-rear standard torque split. PTM also incorporates a two speed transfer box with low-range and an automatic brake differential (ABD) to optimise traction, and anti-slip regulation (ASR) for great stability under acceleration. Phew, to test all that hardware, I need a couple of attempts at the Paris-Dakar, but my makeshift off-road circuit proved how nimble and agile the Cayenne can get when driven in a provoked fashion. All three versions of the Cayenne also benefit from a stability management system that has enough brains to cut engine power if braking isn’t enough to maintain control of the car!

The car we were having a ball of a time with also came with the optional Porsche Active Suspension Management (PASM) that lets you change the damper settings to ensure optimum ride quality on different terrain. PASM comes only in conjunction with the optional air-suspension system though. Actually the PASM can do a lot more but I am really running out of space...

In short, the Cayenne was a revelation even with the ‘basic’ powerpack. It is sportier than the similarly equipped BMW X5 and has more super-SUV appeal. And it is surprisingly capable on and off-road, thanks to all the technology I’ve talked about.

BMW might be a better known badge in our country (raise your hands, those amongst you who remember the Porsche 959) and Porsche purists may not accept this as a genuine crest-bearer, but the fact remains that it is a brilliantly engineered automobile. Porsche have confirmed their position as the world’s best automotive engineers...damn those plasto-aluminium bits, though!

As for Ferdinand Porsche’s quote that I opened the story with, I really don’t think he was talking about an SUV when he said that. What do you think?