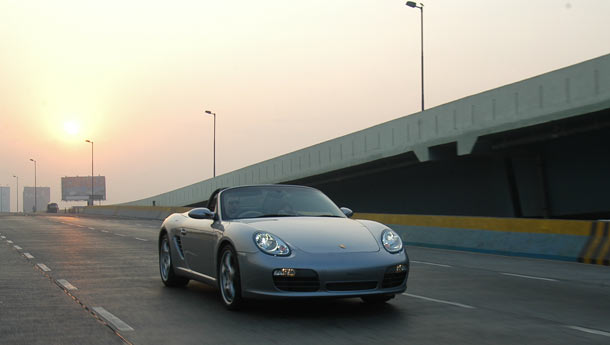 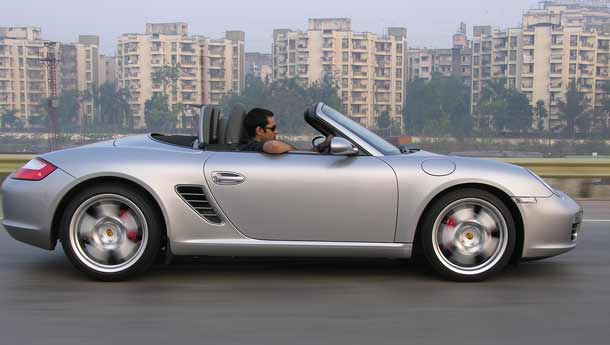 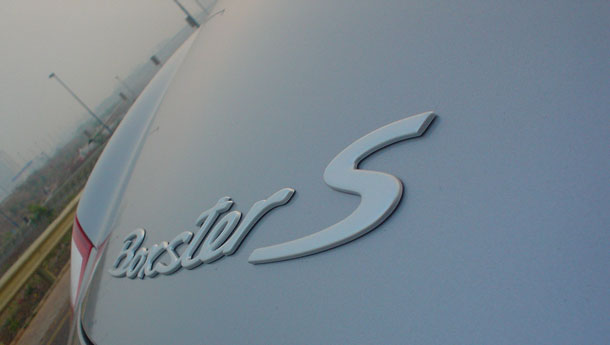 Speed. Time. Concrete jungle... blah, blah... backspace! I wish I could do justice to our abstract theme for the Boxster shoot. Now, after numerous hours spent sharpening my pencil and leafing through FHM  and Zoo for inspiration, I have decided that it is not going to be an easy task to try and write an abstract test drive. I failed. There. So please use your imagination to fully understand the parallel story that we tried to weave using Patrique’s pictures and read the following as a proper effort from a (wink) very serious motoring journalist.

The car was nothing short of brilliant. I have heard people talking about the Boxster, the older one, over the years. Though some hardcore types always spew contempt over any Porsche that is not a 911, I always sensed a bit of affection when people talked about how beautiful an automotive package the Boxster is. Alas, I have never had an opportunity to get behind the wheel of the older one.

Shumi, our motorcycle man, went for the new Boxster launch in Austria (BSM, December 2004) and we had to put a plaster across his face to make him stop talking about it. We did not succeed. Now that we have driven it, we understand it was not the man, it was the car. Forget the supercar badge, the cigar on wheels shape and the lustrous burble from the twin exhaust (we had the big hearted 280 bhp S version, you see), what makes the Boxster tick? Well, if you already referred to our December story, most of what follows will be redundant, but still...

Well, to begin with, it takes not more than 30 seconds in the car for you to get used to it. Yes, a little less than what it takes you to get familiar with the iconic 911. Seriously, the expression ‘fits you like a well worn glove’ was meant for only one car, the Boxster. Start the motor, blip the throttle, slide the automatic gear lever to drive and bingo – you are one with the machine. Everything, from the perfectly contoured seat to the meaty steering wheel to the extended rear-view mirrors everything about the baby Porsche is about function. Thanks to excellent quality of fit and finish, it all manages to look expensive too.   Some test numbers for you. All you need to do is floor the throttle – the car accelerates to 100 kph in 5.5 seconds flat and by the time your average Honda City touches 100 kph, you are saying goodbye to the 150 kph mark and still climbing. You don’t need to be a racing driver with razor sharp reflexes to understand a convertible – things actually look and feel faster when the top is down. So when you are actually doing 150 kph, you feel like you are at the far end of a salt-flat and about to set a new land speed record. Brilliant. Porsche literature gives a 100-200 kph time of 19.4 seconds, something we didn’t test for a lack of road, but something that makes a lot of sense in the Boxster indeed.

Porsche is a small company compared to the GMs, Fords and Toyotas of the world, which means they have to share a lot of bits and pieces between their products (remember the 911/996 which had old Boxster headlamps?). This time, the fully adjustable seat of the 911 is shared by the Boxster, and if you know your Porsches, you will recognise a lot of other bits from the new 911/997. That is not the point though. All this smart sharing means Porsche is also the most profitable car company in the world. Yet, dear reader, none of the part sharing comes through as a compromise in the Boxster. Instead it is all value addition to an already brilliant theme.

Enough. Time to turn the key and let the 3179cc horizontally opposed six wake up again.

With 280 bhp at 6200 rpm and 32 kgm of turning force developing at 4700 revs, it does so with a thrum that sends faint shivers down the seat of your pants. There you are, sitting some 50 cm from the ground and a windshield merely half a foot away from your forehead. There is no time to gauge the air of anticipation – you are moving and moving fast. It takes a while to get used to the five-speed Tiptronic transmission, but once you get a hang of it, you will want every automobile in the world to have one. To shift manually, all you need to do is slide the gear selector to M and then play with the buttons embedded in the steering wheel. To get best results from the Boxster experience, you need to fiddle with one or more buttons though – to get Porsche Active Suspension Management and the sport mode switched on. Now you can hear every gravel bit crunching under the massive 19-inch wheels and in this mode, I am sure you will stop to check for tyre damage even if you drive over a sewing needle.   Changing lanes at three digit speeds, cresting apexes that will aviate most mortal cars and blowing away the last hair standing on your scalp are stuff that this Porsche is very good at. Call it the fastest hairdryer if you may, but in the hands of a good driver, the Boxster S that you see on these pages can be a potent weapon that can make any twisty bit of tarmac a very long extension cord. They say all Porsches are fine-tuned at Nurburgring (and apparently, most Porsche competition too, from Nissan 350Zs to the upcoming Aston Martin V8) and it is easy to understand why. Porsche takes into account the most lunatic drivers in the world and the thousands of combinations and permutations of stupid things he or she might do while driving one of their cars, and it seems all that can be programmed into a punishing testing schedule at Nurburgring. No, talking on the mobile phone while trying to shave, smoke a cigar and make children at 200 kph is not what they mean here.

The result of all that testing is a car that tracks so true, trains have reason to be ashamed. Normally I don’t trust Srini to drive anything that is built after 1950 and has more than 100 horsepower, but on the Boxster’s day out, I was egging him on to straighten a 150 kph corner flat out. And he did, for only the second time in his life. The first was in a wet dream involving a ‘gull-wing’ 300 SL.

So is the Boxster a better buy for India than the 911 Carrera S that we featured in December? Ahem. No. Actually, ‘Noooooooo.’ The 911 is master and the Boxster is disciple. The 911 is king and the Boxster is princess. The 911 is surgeon’s scalpel and the Boxster is Gillette Mach III. Get the point? It is not even a close shave! It is a nice enough car that costs just about Rs 50 lakh to buy and drive, and it is quick and fast straight out of the box. So buy one if you want to get initiated into the religion. Trust me, some day you will be ready for the God, I mean, the 911.