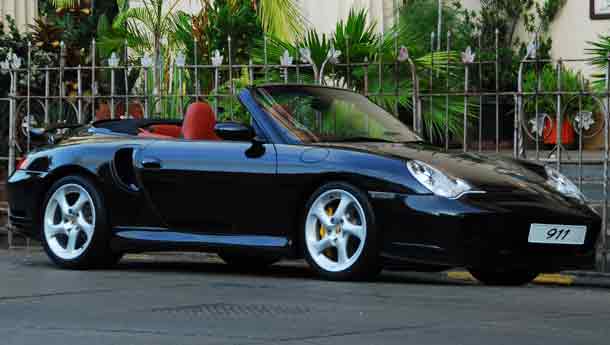 Sacrilege! From the 90s till now, it's a word every automotive enthusiast has had his brush with. Lamborghini lovers expressed their sheer disgust when Audi took over the Sant Agata sanctorum. BMW aficionados hunted for their daggers every single time they saw another 'Bangle' design. And Porsche lovers were rooting for Wendelin Wiedeking's neck when the 911-996 was launched in 1996.

Many here might wonder why, but as a 14 year old then, my reaction too was similar. My knowledge bank of Porsches told me that they were air-cooled. And they were bitches to drive. But here's what I guess, happened. Somebody in the marketing department realised that they were selling far too many Porsche 911s to stock brokers in Manhattan, Paris and Frankfurt. They also realised that they weren't exactly the best of drivers and Porsche's service centres were filled with crashed 911s, mostly at the hands of such men and women. Fearing loss of sales to competition, they decided to water down the 911 and make it easier for this lot to drive.

Unfortunately for Porsche, it didn't go down well with the enthusiast community. And if that's not all, a little while later, the Harley Davidson community were scrounging around for their shotguns after they saw the Porsche-HD co-developed V-Rod engine. Luckily for Porsche, the internet as a medium of expressing disgust had yet to find its footing and before the movement could spread its wings, it died down. Enthusiasts cribbed, but the water-cooled 911, singlehandedly put Porsche on the growth path, before the Cayenne thrusted it into the league of the most profitable auto companies in the world.

The 996-911 Turbo S and Turbo S convertible were the last hurrah, before the present 997 generation zoomed in. So when I managed to bump in to one, right here in our Mumbai city and convinced Shreyans, the official distributors of Porsche in India for a drive, Srini just gave me the cold stare. 'A Turbo S convertible?', Srini asked, unconvinced by the whole thought of a 911 Turbo with an open-top. 'Isn't that the ultimate sacrilege?' Oh, no not again!   The game was set. On a Tuesday morning, when everyone was asleep, I found myself staring at the black beauty as it arrived outside Churchgate station. Ferrari lovers would give it one look, think it's just another poseur 911 cabrio and walk past, but true Porsche enthusiasts would just walk around the car, run their hands over the horizontal slats of the front-air dam, then over the runny-egg headlamps, past the arches, on to the air-scoops behind the doors and finally over the spoiler and then run their hand right around the S badge, swirl around it three times, and scream loud enough to awaken the neighbours, their dogs and their forefathers. You might wonder why the fuss over a letter, but the right or wrong position of a letter can change the course of history, and this one heralded the end of the 996. So it must be something, right?

It is! And I have just another 1200 words to tell you that. It looks fantabulous, if such a word exists. There are subtle hints of aggression, like the four-in-two tail pipe ends, the wide air-dam that from some angles reminds you of the 1970s US spec Porsches with their extended bumpers and of-course that spoiler that has raised many a spirit when the car nudges past 120 kph. The car isn't loud, but it's smart and oozes sheer class, more in the league of an Ermenegildo Zegna suit rather than a Giorgio Armani. Like a Lamborghini Gallardo or a Ferrari F430, it wants to make you get up on a Sunday morning and grab the keys, but while you would head out for a brunch at an upmarket restobar with your better half in the Italian stallions, in the Turbo S you would see most of the road through the side windows and not the windshield as you sneakily detour to a race-track, much to the annoyance of your pretty co-passenger. Zuffenhausen's best engineers had this in mind while tuning the Turbo S, so they only tinkered around with the already brilliant 996 TT to produce the S. They took bigger turbochargers, improved the intercooler, added Porsche's proprietary ceramic brakes (PCCB) and then ducked for cover. With 450 bhp going through the 4wd system, the 3600cc flat-six 996 TT S has 30 bhp more over the standard 996 Turbo and has 6 kgm of additional torque as well. Unlike Ferrari with their Challenge Stradale or Lamborghini's Gallardo Superleggera, the S hasn't cut out any flab, rather let the meat stay where it is, only adding rocket powered roller skates to its feet.

We immediately headed out from Churchgate towards other delectable locales around South Mumbai and mind you, anybody who is everybody turned around and stared. For a car that is more than a year old, has brakes that alone cost Rs 10 lakh and only a hairline scratch on the spoiler, it is a wonderfully maintained, specced and cared for car. The interiors are tastefully done in red hide, but unlike other leather jobs, this one has the skin covering even the most unlikeliest places like the air vents and sun-visors. The owner is so obsessed with his car that he even placed silica gel bags to ensure moisture doesn't ruin the leather. And neither do fingernails. Opting for the five-speed tiptronic in this case, the 911 Turbo S has slightly taller first two ratios than the manual-gearbox equivalent, the third gear is identical. From there on marginal gear-ratio differences still exist, though the manual finishes its fable in sixth.

Once the shoot was completed, we headed down the inner alleys and wide expanses of roads in the snazziest parts of town to get a thorough feel of the car. Getting behind the wheel is an occasion for me, considering how 911 Turbos have nearly caused me to go into fits, minus the froth for company. You place your left leg on the carpet with the foot parallel to the door sill, then bend your knee a wee bit while placing your right leg straight. Then move your hind to brush the side-bolsters, let your left thigh narrowly miss the steering while shifting the entire weight off your body from your right leg to the left, before bringing the last limb inside, rubbing the sole of your foot against the door sill and firmly shutting the door with a sense of achievement. Entering it is not different from the 997 Targa 4S I drove a couple of months back, but because of that Turbo moniker on the engine cover, the hoophla surrounding the occasion is just heightened. It's quite practical once you sit behind the wheel. The gauges are well placed. with the rev counter at the centre and the remaining four gauges highlighting speed, battery charge, ignition temperature, fuel level and engine oil temperature in crescent shaped circles surrounding it, the tell-tale lights encircling the bottom-half of the instrument binnacle. The controls and dials are well fitted, the storage compartments on the door are useful and everything falls to your hand well, though if you've driven a 997, you would be quick to point out that despite the similarities, the dashboard does look a generation old.   Crank it up, lower the window and then try to gauge the engine note. I tried to pinpoint it to something more accurate but at best, this is what I thought it it. It sounds like someone gargling in a tunnel, but with a hint of rustling of leaves thrown in good measure. It doesn't sound as glorious as a well-tuned V8, but the concoction of sounds is good enough to leave your pants wet. One can opt to slot it into D and just floor the throttle or utilize the tiptronic buttons on the steering wheel. But if you do that, it'll upshift once the car kisses the 6750 rpm redline. Alternatively, one can slot the gear-stick into manual mode and let the car stay at the redline for a tad longer before upshifting by itself to save the powertrain from self-destructing. I opted for the latter and boy did it pin my head to the headrest. There's not much until 3500 rpm when the full force of 62 kgm of torque rushes in. Then, all hell breaks loose. From 3500 rpm to the redline, the car accelerates so fast that it feels like the usher of a restaurant has slammed the door on your face, leaving you with a bleeding nose. Clack, thud, vroom and it just keeps all six-cylinders on the boil as you nail the throttle to the floor, letting off at the redline to hear the blow off valve release all that air. Blink once or twice and you will find yourself on the pavement. It demands a lot of attention, a lot of presence of mind and a lot of strength to control the car. For something that weighs over 1600 kg and can accelerate to a 100 kph in 4.5 seconds, you have to stay awake, and if you need to stay awake to complete some work, I'd rather suggest a small spin in one of these rather than a cup of Cappuccino. Going up the gears is a smooth affair while going down has a slight jerk, but there's nothing unrefined about it.

Go through corners and it feels like a Mallard locomotive from the 1930s, going as fast as it can but staying glued to the rails. On one occasion, I even managed to get the traction control to light up frantically as the rearward biased Turbo tried to get the 30 odd percent power to the front wheels before I managed to get the tail to do a samba. The steering felt a little heavy at first, but never could I fault for lack of feel. It does transmit just the right amount, without letting the steering get affected by every small rut in the road. What, though is amazing in a car of this class and power is the ride quality. Unlike the 997 4S that has a sport mode which makes the ride a bit harsh, this one lacks that setting and therefore rides infinitely better. The low speed ride is stiff as I discovered over a couple of paver stones, but let the speeds increase over tarmac and it glides over every raised manhole and bump like any other large German sedan, without the dreaded scuttle shake. It's so practical, that as an everyday supercar it does everything right, even if there's hardly anything for luggage space or space for four-sized adults. But that's exactly what it is for, and I'm glad to say, my sleepless nights dreaming about the 911 Turbo as a teenager haven't gone to waste.

It was hard to let go as it went off into the distance, handing the wheel over to the Porsche driver. I nearly felt a tear drop roll down my eye, my heart burst into tears and a feeling of numbness transmit from my fingers to my toe. Sacrilege? No, it's savage, sensuous and surreal. It's a once teenager's dream come true.

We'd like to thank Shreyans Motors-Porsche Centre Mumbai for the beautiful Turbo S. They can be contacted on 022-66618911.