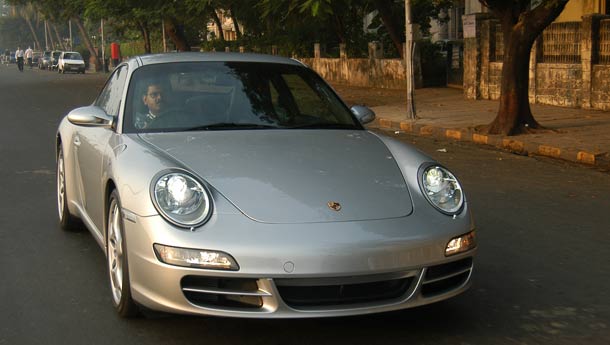 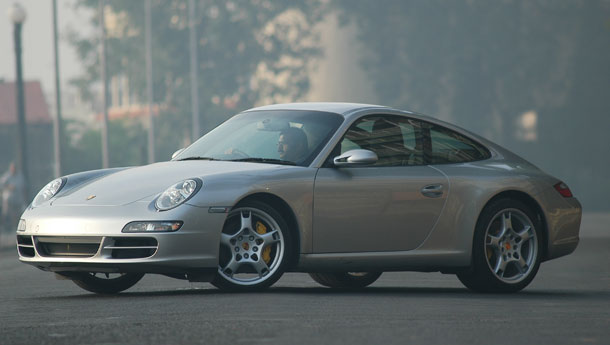 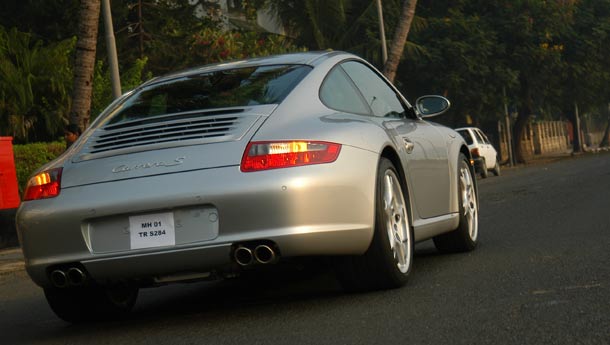 Delhi in October is pleasant. Actually, nice weather to terrorise Delhi-ites in a Porsche 911. Yup, I was seated in the first-ever, New 911 Carrera S to arrive in India and the flat-six ‘boxer’ motor was thrumming behind me. I gamely blipped the throttle and a few onlookers, who were already stunned to see the spanking new silver car, were startled and moved away. But they didn’t go away and I could see, in their eyes, a sense of anticipation reserved for something big that was about to happen. They were expecting me to launch the car. And launch I did, and in big style. Sliding the gear lever to ‘Drive’ and uttering a prayer in my native tongue, I floored the throttle. I’m sure I didn’t disappoint the crowd – precisely five seconds later, they would have seen the speck of a 911 rear end, now accelerating to 100 kph and beyond.

Inside the car, I was pushed back to the body hugging seats and my eyes were trying to gauge the pace at which the 5000 year old city was moving past me. The car felt eager yet very composed. I am tempted to say ‘she was sucking in the tarmac the way a thirsty vampire would draw blood from a virgin’, but then that would be bad language. Peeling out of a by-lane and onto a straight, the tacho needle held firm and the speedo started staring into the better side of 150 kph. Bliss. Yet, the 911 felt as if it could do better. Much better, actually, with a top speed of 285 kph available on demand. But I ran out of guts before I ran out of road.

It took ten years coming, but I’m not complaining. When I started my career as a motoring journalist, I knew that one day I would test drive a brand-new Porsche on Indian roads. Take that, all those who thought I was insane trying to make a living out of driving Premier 137Ds.

Form
The original 911 is four decades old and though it has evolved a great deal over the years, there is no mistaking the new car for anything else. Let me quote from the new 911 manual, ‘nothing about the new car is superfluous, nothing is short term and nothing is open to compromise.’ Well said. The original platform can be traced back to the humble Beetle, but the shape of a 911 today is what other sports cars aspire to be. Want proof? Take a second look at the new Nissan 350Z and you’ll understand. Porsche had built other sports cars too, some of them front engined, but it is the 911 that is the face of Porsche today. Sure, the designers and engineers at Porsche has the talent and resources to develop a new 911 which didn’t resemble the previous car – but then there’s one very powerful question to ask. ‘Why?’ Why meddle with a truly sexy automobile, with lines that have become a benchmark to sports cars and curves that could only have been created by God? Once that realisation dawned, the task in their hands became even more compelling and more significant – how do you make a legend even more perfect? The result, I must say, is stunning and anyone who has seen the 911 that the new car replaces, at least in a picture, would be surprised to know that only the roof panel remains untouched. The whole character of the ultimate sports car is symbolised with immediacy and precision and, sorry for the cliché, it looks fast standing still. Very fast.   Sports cars, including Porsches, are supposed to be cramped and utterly impractical. At least they used to be. The new 911 still cocoons the driver but it is a comfortable cocoon nevertheless. There is ample space for your legs, elbows and head and it passes the true test of a good car interior within minutes of you settling down in the seat, ie, you feel one with the car. It fits you like a well worn glove. Really, otherwise I wouldn’t have opened my 911 account with a 100 kph blast. As Porsche would say, the new 911 is a precision driving instrument, and let me add, calling it a mere car would be an insult.

Function
Forget the 0.29 drag coefficient and the slippery, iconic shape for some time. For a Porsche to be a Porsche, it has to have the correct bloodline and that means the raw essentials of the sports car that Dr Ferdinand Porsche conceived 40 years ago. Most primal of these essentials are a boxer engine – the 911 Carrera has a 3596cc motor which pumps out 325 bhp at 6800 rpm and 37 kgm of torque at 4250 rpm. The car that I drove, the Carrera S, is blessed with a bigger 3824cc unit which can churn out a Bibendum-shredding 355 bhp at 6600 rpm and 40 kgm of pure turning force at 4600 rpm. Soon to follow is the 911 Turbo, with an appetite for Ferraris and Lamborghinis of this world, maxing out well above the 400 bhp mark.

However, let’s concentrate on the Carrera S today. Equipped with the Porsche VarioCam Plus technology that combines variable valve timing and two-stage lift on the camshaft inlets, this engine offers more power and torque as well as frugal fuel consumption. Drive to the rear wheels is via a six-speed manual or the Tiptronic S autobox that serves as a manual when you want to drive in a spirited fashion (hello, read that as ‘most of the time’) using buttons on the steering wheel. The boxer motor is flat and has a very low centre of gravity and like its immediate predecessors (and unlike earlier 911s) benefits from advanced liquid cooling. The engine is mated to the Motronic ME7.8 engine management system which controls the electronic throttle and is responsible for a host of engine related functions. It’s also networked with the Porsche Stability Management system (with ABS 8), standard equipment in both versions. Performance, as expected, is simply startling. The Carrera S can touch 100 kph in 4.8 seconds (5.3 sec for the Tiptronic S). Turn up the wick and it will overtake a Boeing 737 on a runway before the latter lifts off at a top whack of 293 kph (285 for the Tiptronic S).   Rationale
Quick. Fast. The operative words in the Porsche dictionary seem to be these two. And helping the new 911 fulfil these brand promises is a lightweight monocoque that ensures that the driver is one with the automobile. The Carrera S features Porsche Active Suspension Management (PASM) which automatically adapts to changing conditions and individual driving style.

Once this piece of metal sculpture gets going, it becomes lithe and even nimble. Agile and even aggressive. I could not fathom where the 1500 kg of metal and glass disappeared when I was piloting the car. Those 19-inch wheels and rubberband tyres work well with the optional sports suspension (no cost) which includes a mechanically locking rear differential and added stability and traction on twisted roads and bad weather conditions. It feels as if the wheels, the suspension arms and almost everything beneath you is built of exotic materials, which is actually the case. Precision rack and pinion power assisted steering works as if it’s connected to your brain lobes, making turn-ins, however fast they may be, as sharp as in a racing car.

Porsche has packed a lot of technology and safety gear into the new 911 and I will need a whole newspaper to write about it all. But then I do have to give you some critical information – the 911 Carrera S I drove can be yours for Rs 71 lakh – it may not have four doors and may not seat a third passenger comfortably. But guess what, if you want lots of doors and lots of space, Porsche will sell you the Cayenne SUV. Trust me, the new 911 is not a car you would buy to flaunt your wealth. Instead, it would be a reflection of fine automotive taste, sharper than a surgeon’s scalpel in the right hands. This is a supermodel that you can live, take to work and play with. Enough said.

As for me, I consider myself enlightened and that too after exploiting just about 50 per cent of the new 911’s potential. Trust me, you will have a sequel to this story as and when I get behind the wheel of one again.